A number of PTPN11-related processed pseudogenes, i.e. with no apparent exon structure, have been documented in the human genome. All the pseudogenes share >92% nucleotide identity with the PTPN11 cDNA (including the 5-UTR and 3-UTR), but harbour frameshift mutations and multiple stop codons. Three of the five pseudogenes appear to be expressed with distinct tissue distributions and expression levels. 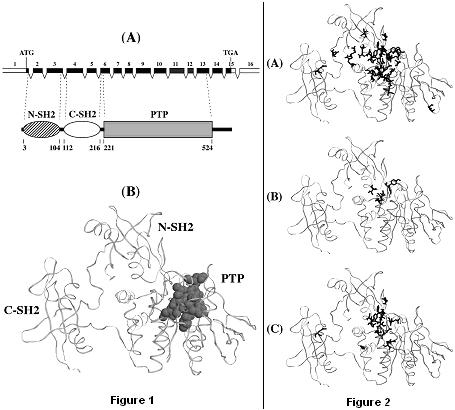 SHP-2 is a member of a small subfamily of cytoplasmic Src homology 2 (SH2) domain-containing protein tyrosine phosphatases. Both the N-SH2 and C-SH2 domains selectively bind to short amino acid motifs containing a phosphotyrosyl residue and promote SHP-2 association with activated receptors and other signaling partners. Crystallographic data indicate that the N-SH2 domain also interacts with the PTP domain using a separate site. As these subdomains show negative cooperativity, the N-SH2 domain functions as an intramolecular switch controlling SHP-2 catalytic activation. Specifically, the N-SH2 domain interacts with the PTP domain basally, blocking the catalytic site. Binding of the N-SH2 phosphopeptide-binding site to the phosphotyrosyl ligand promotes a conformational change of the domain that weakens the auto-inhibiting intramolecular interaction, making the catalytic site available to substrate, thereby activating the phosphatase.

Widely expressed in both embryonic and adult tissues.

SHP-2 functions as an intracellular signal transducer. It positively modulates signal flow in most circumstances, but can also function as negative regulator depending upon its binding partner and interactions with downstream signaling networks. SHP-2 positively controls the activation of the RAS/MAPK cascade induced by several growth factors, and negatively regulates JAK/STAT signaling. In most cases, SHP-2s function in intracellular signaling appears to be immediately proximal to activated receptors and upstream to RAS. The mechanisms of SHP-2s action and its physiological substrates are still poorly defined. However, both membrane translocation and PTPase activity are required for SHP-2 function. SHP-2 is required during development. Embryos nullizygous for Shp-2 have defects in gastrulation and mesodermal patterning resulting in severe abnormalities in axial and paraxial mesodermal structures. Shp-2 function is also required for development of terminal and skeletal structures, semilunar valvulogenesis in the heart, and hematopoiesis.

At least two distinct classes of PTPN11 mutations have been identified in humans.