Preleukaemia
-
Malignant disease
-
Inborn condition
-
Main items
-
Note
A non-contributory past medical history. Patient had no previous leukemia or malignancy, and had not received chemotherapy or radiation in the past.

Sample
Bone marrow aspirate
Culture time
24 hours unstimulated culture; 48 hours with 10% conditioned media
Banding
G- banding
Results
clone 2 46,XY,del(5)(q13q33),add(20)(q11.2)[3]
Mol cytogenet results
Fluorescence in situ hybridization (FISH) was performed on the pellet from the harvested bone marrow specimen using the MDS panel DNA probes that included D5S23:D5S721/5p15.2, EGR1/5q31, D7Z1/CEP-7, D7S486/7q31, D8Z2/CEP-8, and D20S108/20q12. Results of FISH revealed an amplification the D7S486 /7q31 region in approximately 60% of cells (>6 copies per nucleus), and deletions of EGR1/5q and 20q12 in 10% of cells. In addition, we investigated the status of MET as a candidate oncogene for the amplified 7q31 region. Accordingly, the LSI MET SpectrumRed probe along with CEP-7 SpectrumGreen as a control were hybridized on the same specimen. The LSI MET probe is approximately 456 kb and contains the entire MET gene on chromosome 7q31.2. The hybridization revealed amplification of the MET gene with only 2 signals/copies for the control CEP-7 (Figure 2). All FISH probes were purchased from Abbott Molecular, Downers Grove IL, USA. 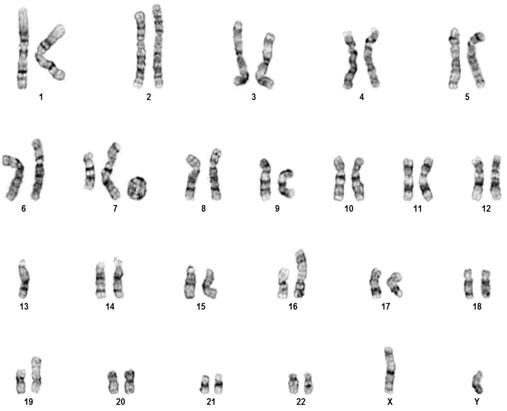 Figure 1: G-banded karyotype at time of diagnosis showing multiple abnormalities including a ring chromosome, and other unbalanced aberrations

Comments
Despite aggressive therapy, our patient never achieved remission, and he died from disease progression shortly after transplant. The complex karyotype as well as MET amplification certainly contributes to the dismal sequence of the disease. Therapeutic agents targeting the MET pathway may help improve patient survival.