Clinical Relevance of Normal Diploid Workflow in Microarray Analysis of Massively Aneuploid Genomes: Lessons from a Case of B-Lymphoblastic Leukemia

Preleukaemia
-
Malignant disease
-
Inborn condition
-
Note
The patient developed flu-like symptoms including severe body pain, fatigue and night sweats. Upon worsening of the symptoms and admission to the emergency room, blood work revealed pancytopenia. The patient was subsequently admitted to the City of Hope National Medical Center for further workup and diagnosis.

Date diagnosis
07-2017
Treatment
The patient was induced with a pediatric ALL regimen and achieved a minimal residual disease-negative remission by day 28 and continues on interim maintenance therapy.
Relapse
N/A
Status
A
Date last follow
06-2018
Survival
11+

Technics
Cytogenomic Microarray Analysis (CMA)
Results
These confounding results prompted us to further investigate potential causes for such drastic differences between CMA and CC/FISH analyses. Upon review of the available materials, it was decided to perform the initial analysis of the data using an alternative method. Therefore, the Normal Diploid Analysis (NDA) workflow was utilized in lieu of the routinely used Single Sample Analysis (SSA). Interestingly, conversion of the same data file using the NDA workflow resulted in remarkably concordant results that fully matched the CC and FISH with no discrepancies between copy number calls and SNP/BAF tracks, confirming a hyperdiploid pattern (Figure 1B). Moreover, analysis of the SNP patterns enabled us to verify the presence of retained heterozygosity in the disomic chromosomes which, along with the absence of any tetrasomic chromosomes, ruled out any potential doubling event. Curiously, analysis of the TCF3 locus revealed a copy number of 2 with a corresponding ~7 Mb terminal region of copy neutral loss of heterozygosity. Additionally, although present in 3 copies, PBX1 was located outside the breakpoint region on chromosome 1.

Note
We explored upfront utilization of NDA using several other oncology specimens and side- by-side comparison using both the SSA and NDA workflows was performed (data not shown). The results indicated that the use of the NDA workflow produced identical results to SSA in the absence of massive chromosomal abnormalities. Consequently, use of NDA does not appear to adversely affect the results of tumor specimens if they are indeed negative for massive hypo- or hyperdiploidy. Dry-lab validation for implementation of NDA could be completed by each laboratory in a short amount of time using previously-tested specimens. 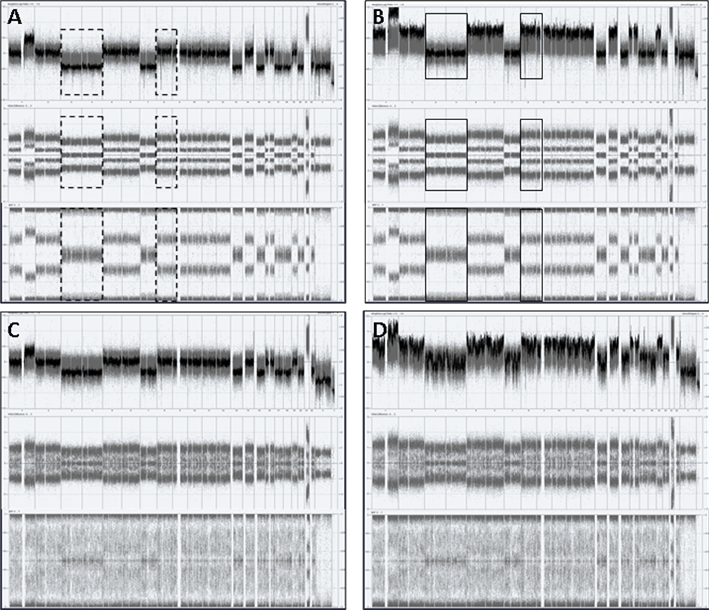 figure 1: Whole genome-views of SSA and NDA workflows assignment of copy number calls. The top, middle and bottom panels in A, B, C and D show log2 ratio/smooth signal, SNP patterns and BAF, respectively A. dashed boxes indicate examples of discrepancies between log2-based copy numbers and corresponding allele tracks in SSA. B. Solid boxes indicate concordance between log2 and allele patterns in NDA. C. Admixture of genomic DNA with an unrelated specimen to recapitulate a chimeric state, results in same copy number calls using SSA, with SNP and BAF patterns serving a less effective role in recognition of an error in normalization. D. Same experiment as in C with NDA of the data, resulting in correct normalization despite an overall noisy background due to SNP mismatch.

Comments
A challenging aspect in the cytogenetic workup ALL is due to a biological phenomenon reported in this condition whereby a near haploid or hypodiploid genome undergoes doubling without concomitant cell division, resulting in the generation of a pseudohyperdiploid clone. Distinction between pseudo- and true hyperdiploidy may therefore be a problem, particularly in cases with atypical patterns and result in uncertainty with regard to the prognostic implications. By virtue of SNP probes and B-allele frequency (BAF), CMA can solve this problem. The retention or loss of heterozygous allelic loci on disomic chromosomes would indicate true- or pseudo-diploidy, respectively. However, as cautioned by ACMG guidelines (Cooley LD et al, 2013), overall ploidy status may affect the normalization of array data, in which case the resultant copy number gain and loss calls might be altered. This case underscores the clinical utility of rapid and low cost integration of NDA in cancer CMA analyses where the CytoScan HD platform is routinely used.

Clinical Relevance of Normal Diploid Workflow in Microarray Analysis of Massively Aneuploid Genomes: Lessons from a Case of B-Lymphoblastic Leukemia