Pseudogene is located on Xq13.2.

The MKK4 cDNA has 1197 bp open reading frame encoding a predicted polypeptide of 399 amino acids with a predicted molecular mass of 67 kDa. 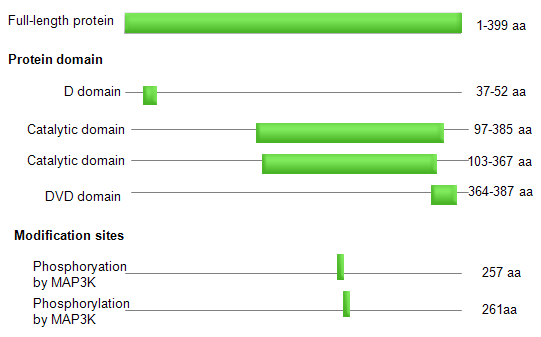 The MKK4 gene encodes a dual specificity protein kinase that belongs to the Ser/Thr protein kinase family. This kinase is a direct activator of MAP kinases in response to environmental stress or mitogenic stimuli. MKK4 has been shown to activate MAPK8/JNK1, MAPK9/JNK2, and MAPK14/p38, but not MAPK1/ERK2 or MAPK3/ERK3. This kinase is phosphorylated and activated by MAP3K1/MEKK.

MKK4 is widely expressed in normal tissues, including the thyroid, heart, lymph nodes, trachea, adrenal glands, and ovaries. The expression of MKK4 is lower in neoplastic tissues.

MKK4 is primarily located in the cytoplasm of the cell.

Three mitogen-activated protein kinase (MAPK) cascades occur in mammals. Each of the MAPK cascades consists of a three-kinase module that includes a MAPK, a MAPK kinase (MAPKK), and a MAPKK kinase (MAPKKK). Various cellular stresses, including ultraviolet (UV) and gamma irradiation, heat shock, hyperosmolarity, hydrogen peroxide, and inflammatory cytokines, activate the stress-activated protein kinase/c-Jun N-terminal kinase (SAP/JNK) signalling pathway. c-Jun N-terminal kinases (JNKs) are MAPKs that stimulate the transcriptional activity of Jun in response to cellular stress. MAP2K4 is a MAPKK that directly activates the JNKs and the related MAPK p38 (Lin et al., 1995).
MKK4 is a dual specificity kinase that activates the Jun kinases MAPK8 (JNK1) and MAPK9 (JNK2) and MAPK14 (p38), but does not activate MAPK1 (ERK2) or MAPK3 (ERK1).

There are no reports regarding the germline.

Genomic studies identified a total of 11 tumours from human cancer samples (3% of the 356 tumours evaluated) with somatic mutations in the MAP2K4 (MKK4) gene. These mutations are primarily located in the kinase domain of MAP2K4. The mutations include frameshift, nonsense, and missense mutations and have been reported to occur in colorectal, non-small-cell lung, melanoma, and ovarian cancer specimens (Ahn et al., 2011).

Entity name
Various cancers
Note
Genomic studies have identified somatic mutations in the MAP2K4 gene in a total of 11 human cancer tumours (3% of the 356 tumours evaluated). These mutations are located primarily in the kinase domain. The mutations include frameshift, nonsense, and missense mutations and occur in colorectal, non-small-cell lung, melanoma, and ovarian cancer specimens (Ahn et al., 2011).
The frequency of MKK4 homozygous deletions in high-grade ovarian serous carcinomas was reported to be 4,2%, which is similar to the rates observed in pancreatic (2%) and breast (4,5%) carcinomas (Nakayama et al., 2006). Loss of heterozygosity on chromosome 17p occurred in 24 (86%) of 28 high-grade serous carcinomas, including two cases with a homozygous MKK4 deletion. Downregulation of MKK4 expression was reported in 96 (75%) of 128 ovarian serous carcinomas compared to benign ovarian tissues. These findings suggest that homozygous deletions or reduced expression of MKK4 may contribute to the development of ovarian serous carcinomas (Nakayama et al., 2006).
MKK4 expression related to tumour invasion results from an epithelial to mesenchymal transition (EMT)-like morphological change. Yeasmin et al. reported that the downregulation of MKK4 increased the phosphorylation of NF-κB and promoted the overexpression of Twist, resulting in the downregulation of E-cadherin, which induced an EMT in ovarian cancer.
In most reports, MKK4 is defined as a tumour suppressor gene. However, Finegan and Tournier evaluated the role of MKK4 in skin tumourigenesis and reported that skin-specific MKK4-deficient mice are resistant to carcinogen-induced tumourigenesis. MKK4 is essential for mediating the oncogenic effects of Ras in vivo (Finegan and Tournier, 2010).
Prognosis
A decreased expression of MKK4 based on immunointensity scores was observed in 63,2% (55/87) of endometrioid adenocarcinomas analysed. Patients with decreased MKK4 expression in endometrial cancer tissues tended to have a shorter overall rate of survival (p = 0,197) (Ishikawa et al., 2010).
Entity name
Embryogenesis
Note
MKK4 has diverse physiological functions during embryogenesis. JNK activation by MKK4 and MKK7 is utilised in parallel morphogenetic events in widely divergent species. In vertebrates and invertebrates, MKK4/MKK7-JNK signalling regulates the expression of secreted signalling molecules that are capable of promoting the movements of neighbouring cells that are required for dorsal closure and gastrulation (Asaoka and Nishina, 2010).