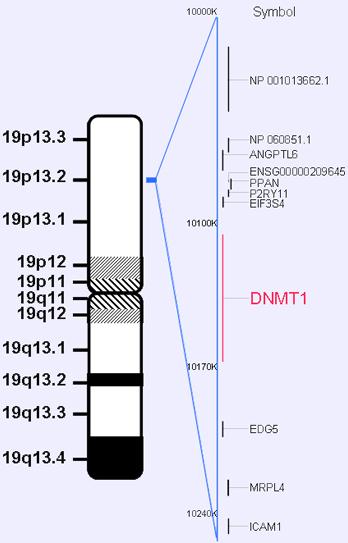 DNMT1 has different translational start points, and exists as different splice variants. The predominant splicing isoform in human somatic cells comprises.
1616 amino acid residues. A shorter germ-cell-specific form of DNMT1 known as DNMT1o is found in growing oocytes and during embryonic preimplantation development. Human DNMT1o exon 1 lies 6 kb upstream of the somatic exon 1 and splices onto exon 2. The predicted translation initiation site for the oocyte-specific mRNA is further downstream in exon 4. The intrinsic stability of the DNMT1o protein allows the creation of stable ooplasmic stores of DNMT1o. Another splice form of DNMT1 is DNMT1b, which incorporates an additional 48 in-frame nucleotides between exons 4 and 5. The amount of DNMT1b protein in somatic cells is very small and its biological functions are still unclear.

The structure of DNMT1 indicates that the DNMT1 gene could have been formed during the fusion of a prokaryotic DNMT gene with a mammalian DNA binding protein gene. The N-terminal regulatory domain of DNMT1 is essential for discrimination between hemimethylated and unmethylated DNA strands and contains a proliferating cell nuclear antigen-binding domain (PBD), a nuclear localization signal (NLS), an cysteine-rich ATRX zinc finger DNA-binding motif and a polybromo homology domain (PHD) targeting DNMT1 to the replication foci. Thus DNMT1 forms the core of the DNA replication machinery complex.
The charge-rich motif of the N-terminal domain of DNMT1 interacts with DMAP1 and represses transcription without the participation of HDACs. The DNMT1 N-terminal domain can also interact with E2F1 transcription factor, HDAC1 and HDAC2. In addition, DNMT1 interacts with methyl CpG binding proteins such as MBD2, MBD3 and MeCPs. Thus DNMT1 is also a crucial element of the transcription suppression complex.
The C-terminal catalytic domain of DNMT1 is characterized by the presence of 5 conserved amino acid motifs, namely I, IV, VI, IX and X. Motifs I and X are filed together to form most of the binding site for AdoMet as the source of the methyl group. Motif IV contains the prolylcysteinyl dipeptide that provides the thiolate at the active site. Motif VI contains the glutamyl residue that protonates the 3 position of the target cytosine. Motif IX has a role in maintaining the structure of the target recognition domain, which is usually located between motifs VIII and IX. 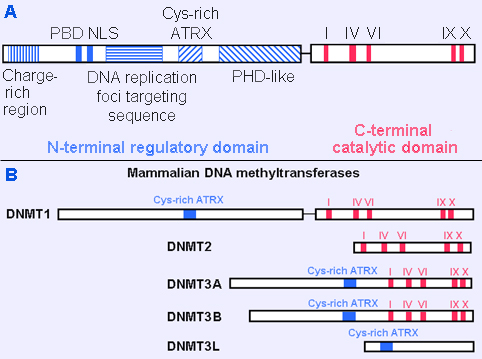 Although DNMT1 is down-regulated in growth-arrested somatic cells, its expression level during the cell cycle is nearly constant. It shows nucleoplasmic expression during G1 and G2 phases, but is associated with replication foci during S-phase. DNMT1o is found in growing oocytes.

DNMT1 is localized to nuclei of somatic cells and is targeted to replication foci during S-phase, whereas it is actively excluded from the nuclei in fertilized eggs and stored in the cytoplasm, leading to so-called passive demethylation during the first DNA replication cycles of fertilized eggs.

DNMT1 uses AdoMet as the source of the methyl group being transferred to the DNA bases. DNMTs pull their target base out of the DNA helix prior to methylation, a process called base flipping. A key feature of the catalytic process is a nucleophilic attack by the thiol group of the cysteine residue in conserved motif IV on the carbon-6 of the target cytosine. The formation of the covalent bond activates the C5 atom towards electrophilic attack and leads to addition of the methyl group to carbon-5 of the cytosine followed by elimination of the 5-position proton and resolution of the covalent intermediate. The glutamic acid of motif VI is important for stabilizing the DNA protein complex. In addition to methyltransferase activity, through interaction with numerous proteins, such as DMAP1, E2F1, HDAC1, HDAC2 and methyl CpG binding proteins, DNMT1 becomes a crucial element of the transcription suppression complex.

Homologs of DNMT1 have been found in nearly all eukaryotes whose DNA bears 5-methylcytosine, but not in those that lack it. Although DNMT2 contains the full set of conserved motifs of the catalytic domain, it lacks the N-terminal domain characteristic of eukaryotic DNMTs. The methyltransferase activity of the recombinant DNMT2 protein is weak in vitro and in vivo, and the biological function of DNMT2 is still unclear. The N-terminal regions of DNMT3A and DNMT3B are highly divergent on the N-terminal side of the Cys-rich region but their C-terminal regions are more closely related to the multispecific DNMTs encoded by phages of the Bacillus species than to the DNMT1 or DNMT2 families. DNMT3L lacks conserved motifs of the catalytic domain but is otherwise closely related to the C-terminal domain of DNMT3A and DNMT3B.

The frequency of somatic mutation of the DNMT1 gene is generally low in human cancers, and DNMT1 gene mutation that can potentially cause a genome-wide alteration of DNA methylation status may be a rare event during human carcinogenesis.

Involvement of germline mutation of the DNMT1 gene in human diseases has not yet been clarified.

A study employing polymerase chain reaction-single strand conformation polymorphism analysis of all 40 coding exons revealed mutations in coding exons of the DNMT1 gene in 7% of colorectal cancers: they consisted of a one-base deletion resulting in deletion of the whole catalytic domain, and a point mutation resulting in a single amino acid substitution. No stomach cancers or hepatocellular carcinomas (HCCs) showed mutations in the coding exons of the DNMT1 gene. No mutation in the 5-flanking region of the DNMT1 gene was detected in any of the examined colorectal and stomach cancers or HCCs.

Entity name
Intestinal adenomas
Note
Human cancers generally show global DNA hypomethylation accompanied by region-specific hypermethylation. A reduction of DNMT1 activity in ApcMin mice due to heterozygosity of the Dnmt1 gene, in conjunction with treatment using the DNA methyltransferase inhibitor 5-aza-deoxycytidine, reduced the average number of intestinal adenomas (Laird PW et al., 1995). On the other hand, genomic hypomethylation in Nf1+/  p53+/  (NPcis) mice due to introduction of a hypomorphic allele of Dnmt 1 (Dnmt1Chip/ ) induced sarcomas at an earlier age compared with NPcis littermates possessing normal levels of DNA methylation (Dnmt1Chip/+) (Eden et al., 2003). The loss of heterozygosity (LOH) rate was increased in hypomethylated cells in Dnmt1Chip/- mice. One of the proposed roles of DNA methylation is suppression of transposable elements in mammalian cells, and chromosomal instability events accompanied by activation of endogenous retroviral elements was also observed in Dnmt1Chip/- mice (Howard et al., 2008).
Entity name
Precancerous conditions and cancers associated with chronic inflammation and/or persistent infection with viruses
Note
Examination of clinical tissue samples showed that overexpression of DNMT1 is frequent in precancerous conditions and cancers associated with chronic inflammation and/or persistent infection with viruses or other pathogenic microorganisms, such as hepatitis B or C viruses, Epstein-Barr virus (EBV) and human papillomavirus (HPV). DNMT1 mRNA levels were significantly higher even in non-cancerous liver tissues showing chronic hepatitis or cirrhosis, which are considered to be precancerous conditions of HCC, than in normal liver tissues, and were even higher in HCCs. EBV infection in stomach cancers is significantly associated with marked accumulation of DNA hypermethylation in C-type CpG islands that are usually methylated in a cancer-specific (not age-dependent) manner. Induction of latent membrane protein 1 of EBV has been reported to induce DNMT1 overexpression in cultured cancer cells. Cervical intraepithelial neoplasia (CIN) is a precursor lesion for squamous cell carcinoma of the uterine cervix closely associated with HPV infection. DNMT1 protein expression is increased even in low-grade CINs compared to normal squamous epithelium, and further increased in higher-grade CINs and squamous cell carcinomas of the uterine cevix. HPV-16 E7 protein has been reported to associate directly with DNMT1 and stimulate the methyltransferase activity of DNMT1 in vitro.
Entity name
Urinary bladder cancers
Note
Even non-cancerous urothelia showing no remarkable histological features obtained from patients with urinary bladder cancers can be considered precancerous, because they may be exposed to carcinogens in the urine. It has been debatable whether increased DNMT1 expression in cancers is due to an increase in the proportion of dividing cells or to an acute increase of DNMT1 expression per individual cancer cell. However, the incidence of nuclear DNMT1 immunoreactivity had already increased independently of cell proliferative activity in non-cancerous urothelia showing no marked histological features obtained from patients with urinary bladder cancers, where the PCNA labeling index had not yet increased, compared to that in normal urothelia obtained from patients without urinary bladder cancers. DNMT1 overexpression was not a secondary effect of increased cell proliferative activity but preceded increased cell proliferative activity during multistage urothelial carcinogenesis.
Entity name
Ductal carcinomas of the pancreas
Note
Ductal carcinomas frequently emerge in pancreases damaged by chronic pancreatitis. Therefore, at least a proportion of peripheral pancreatic duct epithelia with an inflammatory background may be at the precancerous stage. The incidence of nuclear DNMT1 immunoreactivity was significantly elevated in peripheral pancreatic ductal epithelia with an inflammatory background and pancreatic intraepithelial neoplasia (PanIN) as a precancerous lesion than in peripheral pancreatic ductal epithelia without an inflammatory background. The incidence of nuclear DNMT1 immunoreactivity was significantly associated with the degree of PanIN dysplasia. The incidence of nuclear DNMT1 immunoreactivity was significantly higher in invasive ductal carcinomas of the pancreas than in PanINs. The average number of methylated tumor-related genes in microdissected specimens of ductal carcinomas of the pancreas was significantly correlated with the expression level of DNMT1 protein examined immunohistochemically in the precisely microdissected areas. CpG island methylator phenotype (CIMP) is defined as frequent DNA hypermethylation of C-type CpG islands. The levels of DNMT1 expression were significantly higher in CIMP-positive colorectal and stomach cancers than in CIMP-negative colorectal and stomach cancers, but no such association was observed for the expression of DNMT2, DNMT3a or DNMT3b. Thus DNMT1 may be responsible for de novo methylation of CpG islands during multistage carcinogenesis. A theoretical explanation for the role of DNMT1 in de novo DNA methylation in human cancers with dysfunction of p21WAF1, which competes with DNMT1 for binding with PCNA, has been proposed. Moreover, it has recently been suggested that DNMT1 is capable of de novo DNA methylation activity in vivo as well as having a maintenance function: de novo methylation of CpG islands has actually been observed in human fibroblasts overexpressing DNMT1. Therefore, it is feasible that, in cancers, DNMT1 overexpression participates in regional DNA hypermethylation.
Prognosis
The incidence of increased DNMT1 protein expression in HCCs is significantly correlated with poorer tumor differentiation and portal vein involvement. Moreover, the recurrence-free and overall survival rates of patients with HCCs showing increased DNMT1 protein expression are significantly lower than those of patients with HCCs that do not. Increased DNMT1 protein expression in ductal carcinomas of the pancreas is significantly correlated with the extent of cancer invasion to the anterior pancreatic capsule, retroperitoneal tissue and other surrounding organs, and with advanced stage, suggesting that DNMT1 overexpression is associated with aggressiveness of pancreatic cancers. Moreover, patients with ductal carcinomas of the pancreas showing increased DNMT1 protein expression have a poorer prognosis. 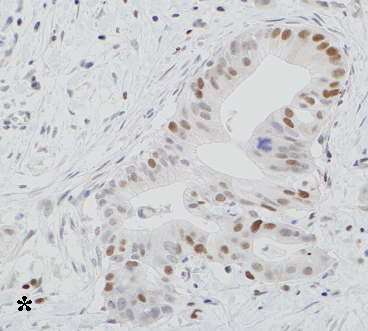