According to Entrez-Gene, H2AFX gene maps to NC 000011.8 in the region between 118469794 and 118471387 on the minus strand. It is a small gene (DQ015918) having a single exon of 432 nucleotides, 73 bp 5UTR and 1089 bp 3UTR. It contains no introns.
H2AFX is recognized as an important DNA damage response (DDR) gene. It maps to cytogenetic locus 11q23.2-23.3 that is highly represented among those commonly deleted or translocated in several haematological malignancies or solid tumors. Interestingly other key DNA damage response genes in the region are ATM, MRE11 and CHK1; combined loss of which can be detrimental to the cell.

Histone H2AFX mRNA (NM_002105) has 1594 bp and is synthesized in G1 as well as S phase. It is known to have two forms of transcript; one having a polyA tail (1651 bp) and another having a conserved stem-loop and U7 binding sequences involved in the processing and stability of replication type histone mRNAs (575 bp).

No pseudogene for H2AFX is known.

The C-terminal tail of H2AX is highly conserved along with the SQ-motif that gets phosphorylated at the serine residue by members of phosphoinositide 3-kinase related protein kinases (PIKKs).

A single exon having a length of 432 nucleotides codes for H2AX protein of molecular weight 15 kDA. It has a characteristic histone H2A domain ranging from 18 to 91 amino acid with H2A signature motif from 22-28 aa. The SQ-motif (140-141) is a feature of H2AX variant that differentiates it from rest of the members of H2A family. The H2AX protein undergoes several posttranslational modifications either in constitutive manner like monoubiquitination at lysine 120 or in response to cellular stress/DNA damage, like acetylation of lysine 5 and phosphorylation of serine 140 and tyrosine 143 residues. By virtue of these posttranslational events, H2AX acquires new regulatory functions during DNA repair and other metabolic processes.

H2AX is ubiquitously expressed in humans with the highest levels observed in the proliferating tissues, eg., testis and thymus. Phosphorylated H2AX is widely correlated with the extent of DNA damage and forms discrete nuclear foci at the sites of damage.

Located in the nucleus and forms discrete foci upon DNA damage.
The figure 3 shows typical staining of H2AX and gamma H2AX in HeLa cells before and after the treatment with etoposide (10mM). 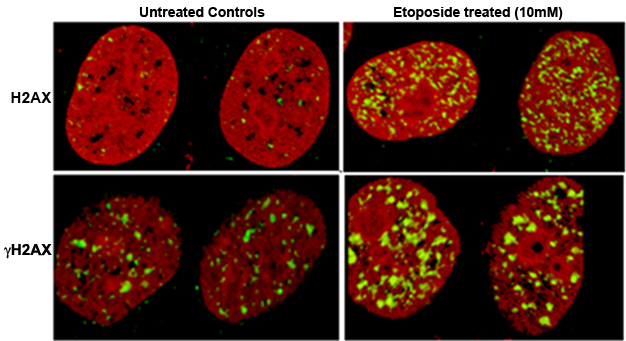 Phosphorylation of Ser-140 (known as gamma-H2AX) is critical during DNA double-strand break signaling. Apart from the exogeneous agents (radiation and chemicals), DSBs generated during replication fork stalling, meiotic recombination events and during immunoglobulin class switching in lymphocytes are also known to induce the formation of gamma H2AX. This phosphorylation event can extend up to 1 megabase on either side of DSB, amplifying the damage signal and hence facilitating recruitment of repair proteins and accomplishment of repair process. The kinases responsible for the serine phosphorylation are ATM, ATR and DNA-PKcs. Once the repair is complete, dephosphorylation of Ser-140 is mediated by a phosphatase, PP2A.
During meiosis, programmed DSBs are formed in SPO-11 dependent manner and H2AX-Ser-140 phosphorylation has been shown to accumulate at synaptonemal complexes. With the progression from leptotene to zygotene and pachytene, the gamma H2AX is subsequently seen sequestered at unsynapsed regions of autosomes and also in the XY-body, probably required for meiotic sex chromosome inactivation. (MSCI).
Apart from ser-140 phosphorylation, the protein also gets modified at lysine 5 residue by TIP60 mediated acetylation and subsequent ubiquitination by UBC-13 in response to DNA damage. The functional implication of this modification is not very clear although it is suggested that this helps in chromatin modulation during the repair process.
Tyrosine 143 phosphorylation of H2AX by WSTF having a tyrosine kinase activity and a component of WICH ATP-dependent chromatin remodeling complex was recently shown to be critical during DNA damage response and acts as a switch to apoptosis/cell survival.
No mutation in H2AFX gene has been detected so far. Few direct studies on human cancers, one on 101 familial breast cancer samples, another on 112 tumors from seven different B cell leukemia/lymphoma and yet another on sporadic breast cancer patients failed to identify any change at nucleotide level. A partial deletion of the region encompassing H2AFX was however identified in significant proportion of head and neck squamous cell carcinoma.

The sequence of 22 residues at carboxy terminal of H2AX is unique and is unrelated to any of the H2A family member but is highly conserved and is present in all eukaryotes.

No mutation so far has been reported for H2AFX.

Entity name
Various cancers
Note
Histone H2AX has been implicated in different human cancers based on association studies of polymorphisms found in the promoter region of the gene. SNPs in the far promoter region of H2AFX (rs643788, rs8551 and rs7759, rs2509049) has been shown to be associated with the risk of sporadic breast cancer and Non-Hodgkins Lymphomas but no association was observed in case of bladder carcinoma. Also alteration of H2AFX gene copy number in significant proportion (37%) of sporadic breast cancer patients has been reported.