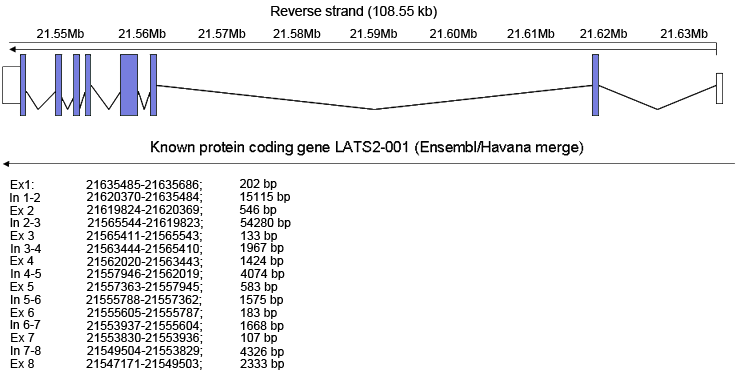 Not known; paralogs according to Ensembl: LATS1, ROCK1, ROCK2.

LATS2 is a nuclear protein of approximately 120 kDa and 1088 AA. The protein localizes to centrosomes during interphase, and early and late metaphase. It interacts with the centrosomal proteins aurora-A and Ajuba and is required for accumulation of gamma-tubulin and spindle formation at the onset of mitosis. It also interacts with a negative regulator of TP53 and may function in a positive feedback loop with TP53 that responds to cytoskeleton damage. Additionally, it can function as a co-repressor of androgen-responsive gene expression. 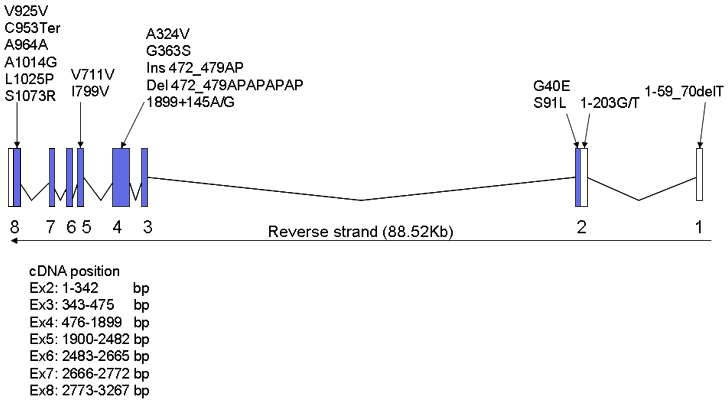 Position of alterations marked on the exons; length and position of the coding region described according to the exons.

Mutations are rare and mostly found in cancerous tissue. More frequently hypermethylation of the LATS2 promoter and or down-regulation of the expression is related to different kind of cancers (lung, breast, hepatocellular, leukaemias, testicular, astrocytomas, retinoblastoma, head and neck).
When polymorphism is noted or when dbSNP entrance number is provided, alterations are listed as polymorphisms; references are those when the alteration was first published.