BCL2 is the milestone of apoptosis-regulatory genes. It contributes to tumorigenesis by blocking programmed cell death as such, promoting cell survival. The aberrant expression of BCL2 gene is strongly associated with resistance to chemotherapy and radiation. This review outlines the structure, function, and role of BCL2 gene in cancer. 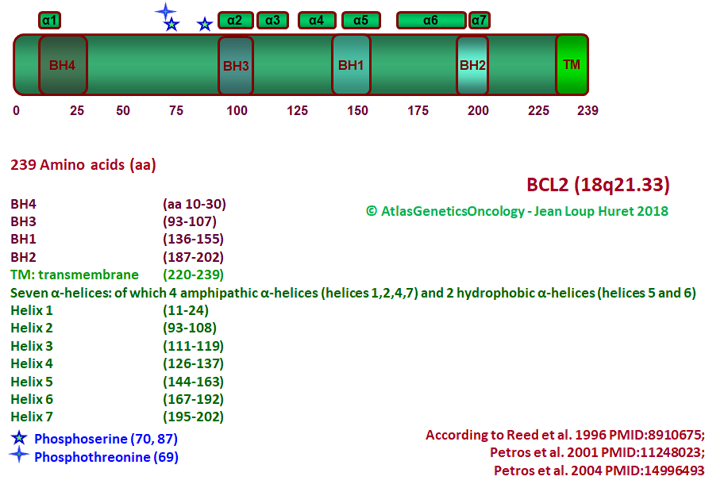 The BCL2 gene encodes a 26 kd protein consisting of 239 amino acids with a single highly hydrophobic domain at its C-terminus, which enables it to localize mainly in the mitochondrial outer membrane, and to a lesser extent in the nuclear envelope and the membrane of the endoplasmic reticulum (Chen-Levy 1989). The main role of BCL2 protein is to maintain the integrity of the mitochondrial membrane, preventing cytochrome c release and its subsequent binding to APAF1 (apoptosis activating factor-1). The protein contains all four BCL2 homology (BH) domains (BH1 to BH4). BH1, BH2 and BH3 constitute the hydrophobic cleft through which the protein interacts and forms homo- and heterodimers with the pro-apoptotic members of the BCL2 family of proteins (Thomadaki 2006, Reed 2006). BCL2 increases the survival kinetics of the cell specifically by blocking apoptosis. Thus it prevents the cell from going into suicidal activities that usually require ATP, new RNA, and protein synthesis, and inducing a variety of cellular ultra-structural changes such as cell shrinkage, nuclear fragmentation, and DNA degradation.

BCL2 expression is widespread in immature tissues prenatally whereas its expression becomes highly restricted with maturation. BCL2 is extensively expressed in immature B-cells and memory B cells but is temporarily down-regulated in germinal center B-cells, partially because of repression by BCL6. High levels of BCL2 have been detected in thymus throughout the medulla, in spleen and in lymph nodes as well as early in the embryonic kidney. Decrease in its expression levels is observed in motor-neurons as well as in pre-B cells being prepared to differentiate (Thomadaki 2006).

BCL2 Protein Family and Apoptosis
The BCL2 family is a prototype of a large family of evolutionarily related proteins that share a high degree of homology although they exert different functions. This family consists of 25 pro-apoptotic and anti-apoptotic members which interact to maintain a balance between newly forming cells and old dying cells. These proteins are localized to the membrane of mitochondria and endoplasmic reticulum, operating as guardians of these organelles (Thomadaki 2006, Reed 2008, Aki etal 2014)). BCL2 family proteins play central roles in cell death regulation and can regulate diverse cell death mechanisms including apoptosis, necrosis and autophagy. They are the key regulators of the mitochondrial pathway of apoptosis. This pathway is required for normal embryonic development and for preventing cancer. These proteins control the permeabilization of the mitochondrial outer membrane (MOM) that releases cytochrome c and other apoptotic factors into the cytosol. BCL2 family proteins share up to four BCL2 homology domains (BH1, BH2, BH3, & BH4) and are generally divided into two categories, anti-apoptotic and pro-apoptotic proteins based on their intracellular function and sequence homology. The anti-apoptotic proteins, BCL2, BCL2L1 (BCL-XL), BCL2L2 (BCL-W), MCL1, BCL2A1 (A1/BFL-1), share homology within four domains (BH1-4). These proteins form a characteristic helical bundle fold, which is critical for their ability to bind to the pro-apoptotic BCL2 family members and thereby exert their antiapoptotic function. The pro-apoptotic proteins such as BAX, BAK1, and BOK share BH1-3 domains whereas other pro-apoptotic proteins, such as BCL2L11 (BIM), BAD, and BID, contain only the BH3 domain and are known as BH3-only proteins (Figure 3). In normal situations, the BH3-only proteins are inactive or exist at low levels in the cell. However, in the presence of apoptotic stimuli the BH-only proteins become activated by post-translational modifications or their expression are increased. The stimulation of BH3-only proteins induces BAX-BAK oligomerization. After their oligomerization, BAX and BAK directly cause MOM permeabilization, a critical step in apoptosis (Aki et al 2014). The role of anti-apoptotic BCL2 proteins is to neutralize pro-apoptotic BH3-only proteins and thus inhibit their effect on BAX-BAK activity and MOM permeabilization. The balance between pro-survival and pro-death BCL-2 proteins is a major factor in determining if cells undergo apoptosis in response to cell stress.
Control of Proliferation by BCL2
Although BCL2-family proteins are key players in the control of mitochondria-based apoptosis, they can also control cell proliferation. High levels of BCL2 protein were reported to be associated with a lower proliferative capacity of human lymphoma, suggesting a negative control on proliferation. The anti-proliferative effect of BCL2 acts mainly at the level of the G0/G1 phase of the cell cycle. Deletions and point mutations in the BCL2 gene show that in some cases the anti-proliferative activity of BCL2 can be dissociated from its anti-apoptotic function (Bonnefoy et al, 2004). This indicates that the effect of BCL2 on cell cycle progression can be a direct effect and not only a consequence of its anti-apoptotic activity. BCL2 appears to mediate its anti-proliferative effect by acting on both signal transduction pathways ( NFAT, ERK) and on specific cell cycle regulators. In addition, BCL2 cooperated with MYC to promote proliferation of B-cell precursors. 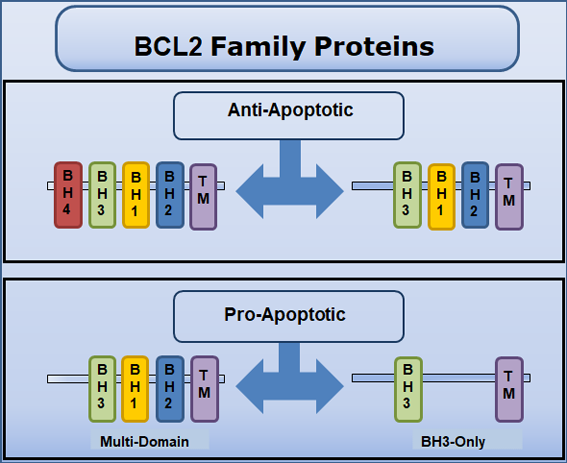 Top note
Apoptosis is essential for normal embryonic development, maintenance of tissue homeostasis, and development and function of the immune system. In contrast, processes that interfere with normal apoptosis promote cell survival and, potentially, oncogenesis. Therefore, dysregulation of BCL2 family has a major role in tumor formation. The BCL2 family is also involved in other diseases, such as autoimmune, infectious and neurodegenerative disorders. The autoimmune disease such as type I diabetes can be caused by defective apoptosis, and schizophrenia may result from an abnormal ratio of pro- and anti-apoptotic factors (Strasser et al, 2011). On the other hand, there is increasing evidence that BCL2 family proteins also have additional functions in other cellular processes, such as mitochondrial morphology and metabolism, which remain largely unexplored. Apoptosis is regulated by a balance of pro-apoptotic factors and anti-apoptotic factors.
Entity name
t(14;18)(q32;q21)
Disease
The t(14;18) Breakpoints in Lymphoma
The t(14;18)(q32;q21) constitutes the most common chromosomal translocation in human lymphomas, being present in over 85% of follicular lymphoma (FL) and in up to 30% of diffuse large B-cell lymphoma (DLBCL). BCL2 is normally located on chromosome 18q21.33 in a telomere to centromere orientation. The molecular consequence of the t(14;18) juxtaposes of the BCL2 gene next to IGH locus on the der(14) chromosome, in the same transcriptional orientation as the IGH gene. The breakpoints on chromosome 18 are clustered with 50-60% fall within a 2.8 kb major breakpoint region (MBR), located in the untranslated 3? UTR of the BCL2 gene, and another 25% falls in the minor cluster region (MCR) (Bakhshi 1987, Willis and Dyer 2000). Others cluster within a third, intermediate cluster region midway between the MBR and MCR while other breakpoints have been described scattered through this region. In rare variant translocations involving the IG light chain loci, t(2;18)(p12;q21) and t(18;22)(q21;q11.2), the breakpoints are located in the 5? noncoding region of the BCL2 gene. The breakpoints on chromosome 14 occur most commonly just 5? of IGH JH segments within sequences that typically show evidence of exonucleolytic "nibbling", N-bp additions, and D segment addition, events that occur normally during attempted V(D)J recombination. Less commonly, IGH breakpoints may occur at sites 3? of the JH segments, or rarely even in IG switch regions. BCL2 mRNA expression is up-regulated in the translocated allele through the action of IGH E[] enhancer sequences, which are highly active in germinal center B cells. In the cases of rearrangements falling in the MBR, a BCL2/IGH fusion mRNA transcript is produced whereas rearrangements in the MCR lead to increased levels of a normal BCL2 mRNA (Aster and longtine 2002). The t(14;18) translocation or its variants does not interrupt the protein-encoding region of BCL2 gene so that the normal and the translocated alleles produce the same-sized, 26-kd protein, a member of a family of proteins involved in the regulation of apoptosis. The somatic hypermutation mechanism associated with the IGH gene often induces mutations in the BCL2 gene which may further dysregulate its expression and can also lead to point mutations in the coding regions of the BCL2 protein (Seto 1988, Tanaka et al 1992). Therefore, a subset of t(14;18) positive lymphomas do not express intact BCL2 protein due to somatic mutations of the gene.
The majority of follicular lymphomas in adults depend on BCL2 overexpression which is almost always the result of t(14;18) translocation or its variants. BCL2 overexpression sustains cell survival but is not sufficient for FL development, thus other genetic lesions or epigenetic events are required. This is supported by the observation that BCL2 transgenic mice develop polyclonal hyperplasia of mature, long lived non-dividing B cells. With time, a fraction of BCL2 transgenic mice develops aggressive, clonal large cell lymphomas, which have acquired additional genetic lesions (McDonnell et al 1988).
Cytogenetics
Diagnostic use of BCL2
Fluorescence in situ hybridization (FISH) is widely used in clinical laboratories to detect BCL2 gene rearrangement in fresh tissue and paraffin embedded tissue sections using dual color translocation DNA probes (Figure 4). BCL2 protein expression by immuno-histochemistry represents a rapid and inexpensive method to identify BCL2 overexpression. In normal tissue, BCL2 antibodies react with B-cells in the mantle zone, as well as some T-cells. Because BCL2 expression is down-regulated in normal germinal centers, the presence of BCL2 protein can help to distinguish follicular lymphomas from reactive follicular hyperplasia. However, positive cells increase considerably in follicular lymphoma, as well as many other forms of cancer. In some cases, the presence or absence of BCL2 staining in biopsies may be significant for the patients prognosis or likelihood of relapse. 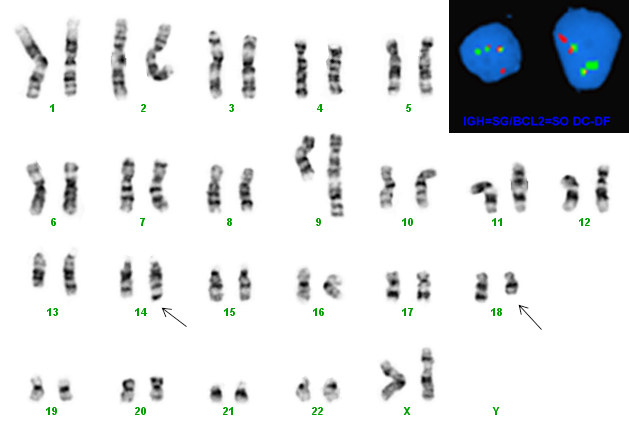