Review on BOK, with data on DNA, on the protein encoded, and where the gene is implicated. 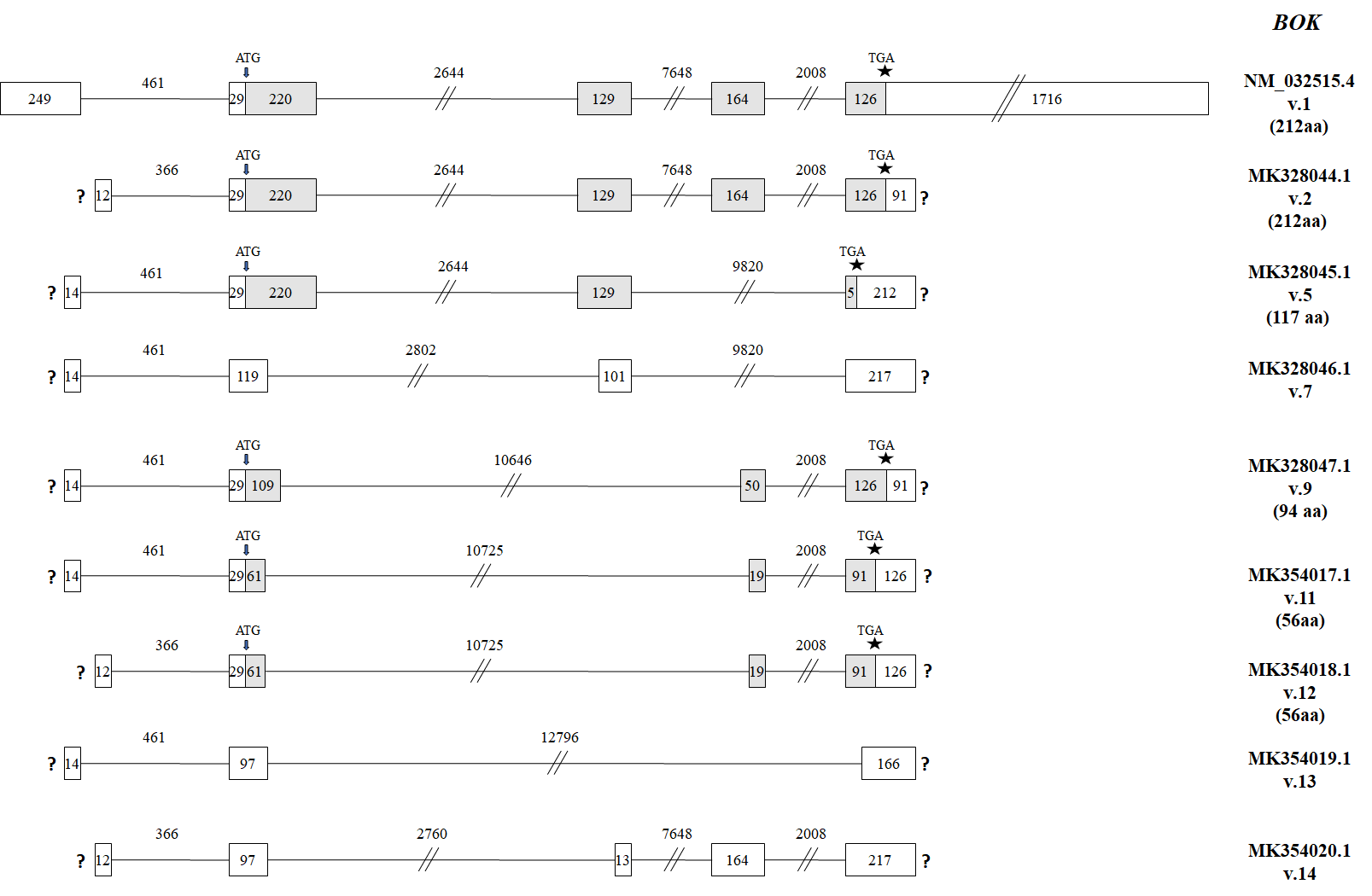 Schematic illustration of BOK transcripts structure with their accession number. The boxes illustrate the exons, the lines illustrate the introns, while the numbers inside the boxes and above the lines represent the length of the exons and the introns, respectively. The presence of the two parallel lines (//) indicates that these shapes are not constructed based on a scale. The grey-colored regions of the boxes represent the coding regions of the mRNA, while the uncolored ones depict the non-coding regions. The question marks (?) symbolize an undetermined untranslated region (UTR), while the arrows and the asterisks indicate the position of the translation start (ATG) codon and the translation stop (TGA) codon, respectively.

The BCL2 ovarian killer gene (BOK) is located on the chromosome 2q and comprises 6 exons and 5 intervening introns. The number of the verified transcripts is nine and eight of them have recently been discovered and submitted to GenBank (NM_032515.4, MK354020.1, MK354019.1, MK354018.1, MK354017.1, MK328047.1, MK328046.1, MK328045.1, MK328044.1). So far, 2 alternative, untranslated first exons, 5 alternative second exons with a length of 249, 119, 138, 100, and 97 nucleotides (nt) respectively, and 3 distinct fifth exons with a length of 164, 50 and 19 nt have been identified. Regarding the two possible first exons, the first is 249-nt long and the second one has a length of 171 nt. However, the length of the second possible exon is calculated based on in silico analysis. The 5 untranslated region (UTR) has not been extensively studied, and therefore an uncertainty exists regarding the 5 end. The exon 3 consists of 193 nt, the exon 4 of 129 nt, and the exon 5 of 164 nt. The exon 3 is an outcome of computational analysis of expressed sequence tags (ESTs) and has not been validated yet. Furthermore, there is evidence of an extension in the second exon and a truncated version of the sixth exon lacking an internal segment in human, based on our preliminary results and their existence in other primates, such as in chimpanzee.

The aforementioned transcript NM_032515.4 is considered as mRNA and encodes the protein isoform NP_115904.1. In silico analysis revealed that 3 (MK328044.1, MK328045.1, MK328047.1) out of the 9 transcripts have an open reading frame and could hence be translated to a functional protein isoform. Moreover, there is a predicted transcript, derived from computational analysis, with indications of being a coding mRNA. The presence of three different stop codons is well-worth to be mentioned. The rest of the transcripts do not seem to have an open reading frame and, therefore, are considered as candidates for non-sense mediated mRNA decay. Extensive expression sequence tag (EST) analysis led to the discovery of many more transcripts, resulting from alternative splicing. The alternative splicing of BOK pre-mRNA producing several distinct transcripts is expected to result in protein isoforms with a different pattern of BCL2 homology (BH) domains or to transcripts with regulatory function. For instance, the presence of a potential transcript, derived from EST analysis, lacking exons 2, 3, and 4 is an example of a possible alternative BH motif. These results underline the need of further research in the field of alternative splicing in BOK, as it will shed light on the enigmatic cellular role of BOK. Regarding its expression levels, high RNA levels have been observed in fat, liver, lung, kidney and prostate tissue. However, its expression in particular cancerous tissues, as it defined by distinct research studies, seems to be downregulated.

None. Even though pseudogenes are absent, an antisense gene has been characterized, known as BOKAS. Both genes are located in the same region, but in different orientations. There is a restricted overlap between these two genes in the region of the first exon of BOK. The BOKAS comprises two exons and is considered as a non-coding RNA with possible regulating properties as far as the BOK-induced apoptosis is concerned. Its presence has only been validated in testis and in particular cancer tissues, but not in the majority of normal ones (Zhang et al., 2009).

Schematic illustration of the two curated amino acid sequences of BOK protein isoforms in Homo sapiens, accompanied by the location of their BH domains.

The BOK gene encodes a main protein isoform of the BCL2 family, named BOK-L, with a length of 212 amino acid residues and a mass of 23.3 kDa. It is characterized by the presence of the BH1, BH2, BH3, and BH4 domains, a C-terminal transmembrane domain, and a nuclear export signal. The existence of the BH4 domain is considered as typical feature for BCL2 family proteins with anti-apoptotic function. Therefore, this finding creates an ambiguity regarding the cellular role of this molecule (Soleymanlou et al., 2005).
Except of the full-length protein, an additional isoform has been detected with a truncated BH3 domain (170 aa) in mouse, named Bok-S. It is hypothesized that this isoform derives from the deletion of 43 aa residues from the main isoform and leads to a fusion of the N-terminal-half of its BH3 domain to the C-terminal half of the BH1 domain.
An alternative splice isoform has been discovered in human tissues (BOK-P, also known as Mtd-P) with a length of 135 aa residues. This isoform is considered to result from the deletion of exon 2 and part of the 5 UTR (249 bp deletion). Due to the 249-bp deletion, this isoform comprises only BH1 and BH2 domains, and perhaps a partial BH3 domain (Soleymanlou et al., 2005). Because of the absence of BH4 domain in this isoform, the pro-apoptotic function of BOK could be attributed to this particular molecule.

It was initially discovered in ovarian tissue, hence the designation "ovarian killer". After further research, it has been detected in other tissue types as well, including brain, liver, rectum, kidney, but its main expression has been observed in reproductive tissues (Jaaskelainen et al., 2010,Echeverry et al., 2013,Llambi et al., 2016).

Due to the homology of BOK with BAX and BAK1, its pro-apoptotic properties were proposed. Contrary to BAK and BAX proteins, BOK is not well-studied and its role remains enigmatic, probably because of its low expression in the cell lines which are commonly used for experiments. At the beginning, BOK was considered to act similarly to BAX and BAK because of the formation of clustered structures in the outer mitochondrial membrane. These structures indicate a possible association with cytochrome c release. However, the results of a recent valid research study demonstrate the ability of BOK to induce cytochrome c release, and subsequent apoptosis in BAK/BAX deficient cell model systems. Therefore, the ability of BOK to induce apoptosis in a BAK- and BAX- independent way is proposed (Einsele-Scholz et al., 2016). Moreover, BOK seems to play a role in multiple signaling pathways, some of which are mentioned below; it is involved in granulose cell apoptosis through Caspase-3 ( CASP3) activation (Jaaskelainen et al., 2010) and in the intrinsic apoptotic mechanism depending on the tumor protein p53 ( TP53) (Yakovlev et al., 2004). This mechanism is activated in response to DNA damage. It is, also, capable of inducing apoptosis without the prerequisite of heterodimerization with other pro-apoptotic members of BCL2 family, when the ER-associated protein degradation (ERAD) system is inhibited. More specifically, BOK, independently of BAX and BAK, participates in mitochondrial outer membrane permeabilization, leading to cytochrome c release (Einsele-Scholz et al., 2016). In the early stages of placental development, regulation of trophoblast cell proliferation could be achieved by BOK through its effect on the G1/S transition. This can be achieved by the regulation of cyclin E1 ( CCNE1) expression (Ray et al., 2010). Finally, there are indications that BOK can disturb MCL1 and Beclin-1 ( BECN1) interaction and therefore has an effect on the induction of autophagy (Kalkat et al., 2013).
BOK protein has been examined more thoroughly in the mouse. The results of these studies revealed alternative functions of this molecule. In circumstances of ER stress, BOK induces positive regulation of EIF2AK3 (PKR-like ER kinase, PERK) to initiate a downstream unfolded protein response and a downstream regulation of BAX/BAK activation, thus leading to the mitochondrial apoptotic pathway (Carpio et al., 2015). Besides its pro-apoptotic role, there are indications that BOK has anti-apoptotic properties during neuronal apoptotic process. In the aforementioned process, it regulates neuronal calcium homeostasis and mitochondrial bioenergetics, resulting to downregulation of poly ADP-ribose polymerase ( PARP1)-dependent cell death. This mechanism is considered as a response to N-methyl-D-aspartate excitation (DOrsi et al., 2016). Finally, Bok seems to strongly interact with inositol 1,4,5-trisphosphate (IP3) receptors via the BH4 domain. Regarding the outcome of a research study, this interaction, possibly, enhances the structural stability of both IP3 receptor tetramers and Bok, and leads to the limitation of overexpressed pro-apoptotic activity of BOK. One of the most interesting findings of this study was the protection from degradation, which is provided to BOK by this interaction. Based on the similarity between the human and mouse protein isoforms, we could hypothesize that human BOK protein could be involved in the aforementioned pathways and act in a similar manner.

To the best of our knowledge, no germinal mutation has been discovered in vivo.

To the best of our knowledge, none somatic mutation has been discovered in vivo. However, an in-vitro mutation in positions 71-73 in leucine-rich region led to significant accumulation of BOK in the nucleus and to increased apoptotic activity. It is significant to mention that BOK is the only BCL2 family member possessing this leucine-rich region (Bartholomeusz et al., 2006).

Entity name
Colorectal cancer
Prognosis
There are indications that BOK could act as a possible prognostic biomarker in colorectal cancer (CRC), because of the association of its high expression levels with poor disease-free and overall survival in CRC patients. However, in the aforementioned research study, decreased expression levels of BOK protein were measured in stage II and III CRC tumors compared to paired non-cancerous tissue specimens. These seemingly contradictory results highlight the differential function of BOK and its involvement in multiple activities. This assumption regarding the different activities of BOK in CRC is additionally supported by its various associations with distinct protein molecules. More specifically, a strong association was revealed between BOK and CALR (Calreticulin), but no significant correlation was observed between BOK and other ER-stress markers, including cleaved CASP3 (Carberry et al., 2018).
Entity name
Non-small cell lung carcinoma
Prognosis
Overexpression of BOK in lung adenocarcinoma-derived A549 cells resulted in inhibition of TGFβ-induced migration and epithelial-to-mesenchymal transition of these cells. Furthermore, after the comparison of BOK levels among patients with non-small cell lung carcinoma (NSCLC), tumors of grade 2 and 3 and/ or with nodal metastasis had lower BOK expression levels than tumors of grade 1 without nodal metastasis. These results support the favorable prognostic value of BOK in NSCLC patients. More specifically, there are indications that the BOK overexpression in NSCLC patients is associated with longer overall survival (Moravcikova et al., 2017).
Entity name
Preeclampsia
Prognosis
Preeclampsia s a disorder that affects 5-8% of pregnancies worldwide, with frequent fatal consequences for the mother and the fetus, as well. Preeclampsia has been attributed to extensive trophoblast cell death, which seems to be related with the presence of a group of bioactive sphingolipids, named ceramides. The aggregation of these structures affects BOK by increasing its expression levels, resulting to extensive trophoblast autophagy and death. It is important to clarify that preeclampsia is also correlated with increased phosphorylation of dynamin 1-like protein ( DNM1L, also known as DRP1). Based on the results of a recent research study, a direct effect of BOK on DNM1L expression is highlighted on DNM1L expression, and hence its pivotal role in mitochondrial energetics. These results enhance further the importance of BOK in this disease and underscore its potential drug targeting for possible disease cure (Ausman et al., 2018).