The cartoon depicts the structure of the TYRO3 gene (bottom) roughly aligned with the corresponding functional protein domains (top). The genomic DNA is represented by boxes (exons) and connecting lines (introns). The exons are drawn approximately 10-fold larger than the introns to facilitate alignment with the protein domains. The open ended boxes for exons 1 and 19 indicate untranslated regions which are not shown here. Exon 2 can be alternatively spliced resulting in transcripts containing either exon 2A, 2B, or 2C. 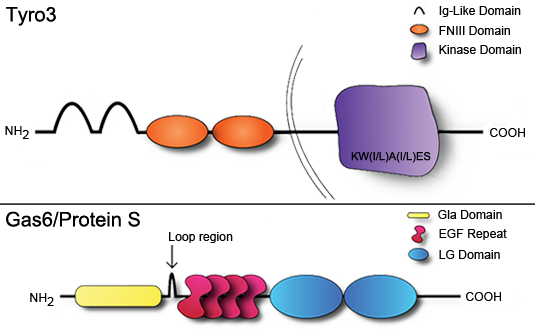 The cartoon on the top depicts the domain structure of the TYRO3 receptor tyrosine kinase. The conserved sequence within the kinase domain is shown. The amino acids at positions three and five within the conserved sequence are leucine (L) residues in TYRO3 and isoleucine (I) residues in the related receptor tyrosine kinases, AXL and MERTK. The cartoon on the bottom depicts the domain structure of the ligands, Gas6 and Protein S, which share 43% homology. Thrombin cleavage sites are present in the loop region of Protein S, but not Gas6. Gas6 and Protein S are rendered active by vitamin K-dependent carboxylation of the gamma-carboxyglutamic acid (Gla) domain.

TYRO3 is synthesized as an 890 amino acid protein. The predicted molecular weight of TYRO3 is 97 kD, however, the extracellular domain contains sites for NH2-linked glycosylation. Due to the potential for post-translational modifications, TYRO3 proteins can range in size from 100 to 140 kD (Linger et al., 2008). The extracellular domain of the TYRO3 receptor contains two Ig domains (aa 60-117 for domain 1 and aa 156-203 for domain 2) and two FNIII domains (aa 224-313 for domain 1 and aa 322-409 for domain 2) (Ohashi et al., 1994). The two Ig domains and two FNIII domains define TYRO3 as a member of a family of receptor tyrosine kinases (RTKs), which also includes AXL and MERTK. TYRO3, AXL, and MERTK constitute the TAM family of receptor tyrosine kinases (Linger et al., 2008). The extracellular domain of TYRO3 is the ligand-binding region for the ligands GAS6 and Protein S. GAS6 has been shown to bind the TYRO3 receptor specifically in the Ig domains (Heiring et al., 2004).
The tyrosine kinase domain (aa 525-776) is within the intracellular region of the TYRO3 receptor. This kinase domain contains a signature motif, KW(I/L)A(I/L)ES, that is only found in the TAM receptor family members (Graham et al., 1994). Following ligand binding to the extracellular domain, the TYRO3 receptors dimerize and autophosphorylation of the tyrosine kinase domain occurs. In addition to ligand-dependent signaling, studies suggest that TYRO3 signaling can be initated through a ligand-independent mechanism (Taylor et al., 1995; Heiring et al., 2004). Three tyrosine residues (Y681, Y685, Y686) located within the activation loop of the kinase domain of the TYRO3 receptor correspond to three tyrosine residues in the MERTK receptor kinase domain, which have been identified as sites of autophosphorylation, however, there is no direct evidence that Y681, Y685, and Y686 are autophosphorylated in the TYRO3 receptor (Linger et al., 2008). TYRO3 phosphorylation has been linked to the activation of ERK1/ERK2 and AKT (Chen et al., 1997; Lan et al., 2000; Prieto et al., 2007), but the downstream signaling events following ligand binding of the TYRO3 receptor are poorly understood. Studies have shown potential interactions between TYRO3 and RanBMP, protein phosphatase 1 (PP1) and the p85 subunit of PI3K (via one of its SH2 domains), as well as members of the Src family kinases (Toshima et al., 1995; Lan et al., 2000; Hafizi et al., 2005).

TYRO3 activation and downstream signaling through MAPK/ERK and PI3K/AKT may facilitate the cellular functions of TYRO3, including actin reorganization/cell migration and cell survival. Within the brain, activation of MAPK and PI3K pathways via TYRO3 may lead to expression of genes involved in alterations in the consolidation of memories, addictive behaviors, and circadian rhythms, as well as modulating synaptic plasticity (Prieto et al., 2007). TYRO3 has also been shown to mediate the survival and migration of Gonadotropin-releasing hormone (GnRH) neurons within the forebrain (Pierce et al., 2008). There is evidence suggesting that TYRO3 plays a role in the clearance of apoptotic cells by dendritic cells, and to a lesser extent, macrophages and is essential for NK cell maturation and differentiation (Caraux et al., 2006; Seitz et al., 2007). TYRO3 is necessary for normal platelet aggregation and clot stabilization (Angelillo-Scherrer et al., 2005). TYRO3 may also mediate cell entry by filoviruses (Shimojima et al., 2006). In addition to its functions within the brain and immune cells, TYRO3 is also involved in the reabsorption of bone by osteoclasts (Nakamura et al., 1998).

The two Ig domains and two FNIII domains within the extracelluar domain of TYRO3 are shared with the other members of the TAM family, AXL and MERTK. Within the extracellular regions, the TAM receptors share 31-36% sequence identity (52-57% similarity). The protein sequences in the intracellular domains are 54-59% identical (72-75% similar), with higher homology in the tyrosine kinase domains (Graham et al., 1995).

No mutations in TYRO3 have been documented.

Entity name
Malignancy
Disease
TYRO3, as well as the other TAM receptor family members have been implicated in several malignant diseases. Studies have shown that TYRO3 expression is upregulated in AML, CML, multiple myeloma, endometrial cancer and melanoma (Liu et al., 1988; Crosier et al., 1995; De Vos et al., 2001; Sun et al., 2003; Zhu et al., 2009). In addition to TYRO3 overexpression in many cancers, it has also been shown to have transforming abilities (Lan et al., 2000). TYRO3, like its family members, may function as a prosurvival factor in tumorigenesis. In melanoma cells, TYRO3 knockdown inhibits proliferation and leads to increased sensitivity to chemotherapeutic agents in vitro (Zhu et al., 2009).
Entity name
Autoimmune disease
Disease
Triple mutant mice that lack all three TAM receptors (TYRO3, AXL and MERTK) have a lymphoproliferative disorder of broad-spectrum autoimmunity. Specifically, triple mutant mice have high titers of auto-antibodies to nucleoproteins, dsDNA and collagen, leading to the development of diseases resembling rheumatoid arthritis, pemphigus vulgaris and systemic lupus erythematosus (Lu et al., 2001). These finding suggest a role for TYRO3 in regulation of the immune system however, no human cases have been reported.