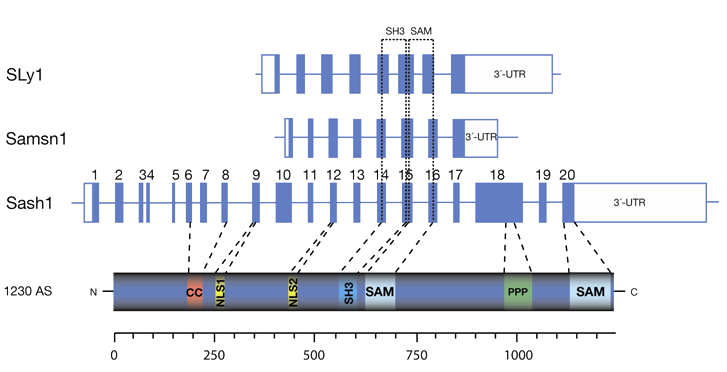 Schematic Structure of the Exon structure of human SASH1, as compared to the other members of the SLY-family of signal-adapter proteins, SLy1 (SH3-protein expressed in lymphocytes), and SAMSN1 (or SLy2). At the bottom, the transcribed full-length protein is shown schematically. SASH1 is the largest member of the protein family, it is encoded by 20 exons. All SLY-family proteins share a central conserved NLS (nuclear localisation signal) sequence, a SH3 and a SAM domain (dotted line). SASH1 comprises, in addition, a coiled-coil (CC) motif, a N-terminally located NLS signal (NLS2), a poly-prolin motif (PPP), and a second SAM domain at the C-terminus.

Human SASH1 was first described in 2003 as putative tumor suppressor in breast cancer, it encodes a protein with both cytosolic and nuclear localisation. It lacks enzymatic activity, but, due to its multiple protein-protein interactions domains (SH3, SAM, poly-prolin stretches), it is likely to serve as a signal-adapter module that integrates and coordinates other proteins, thereby acting as a negative/positive signal transduction nodule.

SASH1 shows broad expression on protein level in human tissue and cell lines, as well as in mouse tissue. Exception: no or only weak expression has been found in lymphocytes.

SASH1 is found both in the cytosol, as well as in the nucleus, with the exception of the nucleolus. Enrichment in membrane-proximal areas in migrating cells at the lamellipodia (Martini et al., 2011).

SASH1 has no intrinsic enzyme activity, but can form multi-protein complexes due to its protein-protein interaction domains, and can modulate intracellular signal transduction. Moreover, SASH1 is implicated in the regulation of cell adhesion and migration (Martini et al., 2011).

Heterozygous germline mutations have been identified in the three nonconsanguineous families with benign dermatologic features in a Chinese study (Zhou et al., 2013). However, no correlation between these mutations and occurrence of malignoma has been reported so far:
1) T → G substitution at nucleotide 2126 (TAC → GAC) in exon 14, resulting in amino acid substitutions of Tyr to Asp (Y551D) at codon 551
2) T → C substitution at nucleotide 2019 (CTC → CCC) in exon 13, resulting in Leu to Pro at codon 515 (L515P)
3) G → A substitution (GAA → AAA) at position 2000 in exon 13, causing Glu to Lys at codon 509 (E509K).

No truncating or nonsense mutations have been identified in somatic cells for SASH1 in a study on human breast cancer (Zeller et al., 2003).