Figure 1. Human GRM1 has 10 exons, which are depicted by boxes and shown with the relative position to one another. Adapted from DiRaddo et al., 2013.

The transcribed matured mRNA is 6939 bps in length.

GRM1 encodes five alternative splice variants (1a, 1b, 1c, 1d, and 1e) (Zhu et al., 1999). All five variants contain the same N-terminal, but differ in the amino acid composition of their C-terminal domains due to the alternative splicings (DiRaddo et al., 2013). 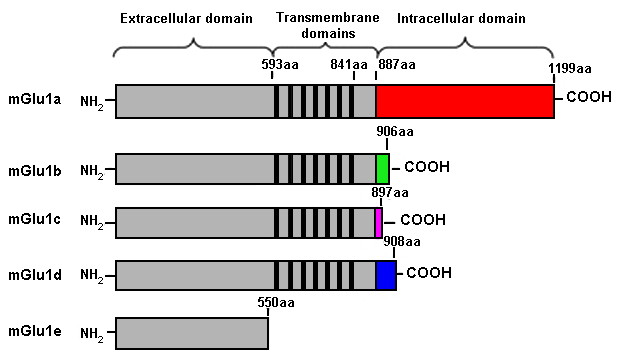 Figure 2. There are five human mGluR1 isoforms. The black boxes represent the seven-transmembrane domains of mGluR1. Alternative splicing of mGluR1 mRNA produces five mGluR1 isoforms each with a unique C-termini, which is highlighted by the different colors. The shortest isoform, mGluR1e, is truncated before the seven-transmembrane domains, which results in the expression of only the amino terminal fragment (Costantino and Pellicciari, 1996). Adapted from Hermans and Challiss, 2001.

mGluR1 is an 1194 amino acid seven-transmembrane domain G-protein coupled receptor normally expressed in neuronal and glial cells in the brain (Stephan et al., 1996; Hermans and Challiss, 2001). Its natural ligand is the excitatory neurotransmitter, L-glutamate. Structurally, mGluR1 has various domains that are necessary for its functions. The N-terminus forms two large extracellular lobes separated by a cavity where the ligand glutamate binds to and is referred to as the amino terminal domain (ATD) or "Venus Fly Trap" (OHara et al., 1993; Beqollari and Kammermeier, 2010). ATD is separated from the trans-membrane region of mGluR1 by a 70 amino acid cysteine rich domain (CRD), which is essential for dimerization, and activation of the receptor (Huang et al., 2011). The seven alpha-helical transmembrane domains (TMD) precede the cysteine rich region. Following the TMD is the carboxyl terminus of mGluR1, also known as the intracellular cytoplasmic tail domain (CTD). CTD is involved in modulating G-protein coupling and selectivity (Pin et al., 2003; Seebahn et al., 2013). The CTD is also the region subjected to alternative splicings, regulated by phosphorylation, and modulatory protein-protein interactions (Niswender and Conn, 2010). The CRD is consisted of three beta-pleated sheets and nine cysteine residues. CRD plays a key role in facilitating the allosteric coupling between the ATD and the TMD regions during ligand binding and receptor activation (Niswender and Conn, 2010). Upon activation of mGluR1 by glutamate, the signal induced is transmitted from the ATD through the CRDs, by way of a disulfide bridge formed between the 9th cysteine of the CRD and a cysteine residue in lobe 2 of the ATD (Rondard et al., 2006; Muto et al., 2007). As a result, a conformational change takes place that brings the C-terminal regions of the CRDs closer to one another and elicits cysteine-cysteine interaction in the e2 loop of the TMD (Muto et al., 2007). This conformational change produces a shift in the TMD to induce G-protein activation (El Moustaine et al., 2012). 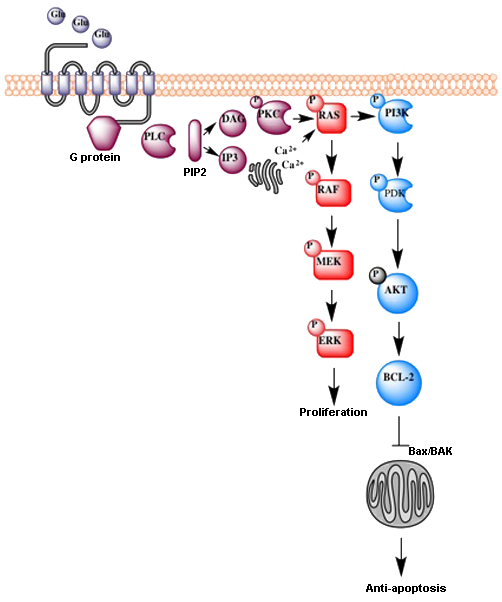 Figure 3. Diagram of the proposed signal transduction pathways elicited by stimulated mGluR1. Adapted from Teh and Chen, 2012b.

mGluR1 activation is involved in mediating neuronal excitability, synaptic plasticity, and feedback inhibition of neurotransmitter release (Speyer et al., 2012). All of which promotes learning and memory formation in the central nervous system (Hermans and Challiss, 2001).

Entity name
Melanoma
Disease
Melanoma is the most severe form of skin cancer and arises from the aberrant transformation of melanocytes. The most common mutations identified as drivers of melanomagenesis include B-RAF and N-RAS activating mutations as well the tumor suppressors INK4a/ARF and PTEN (Teh and Chen, 2012a).
Oncogenesis
Glutamate signaling via mGluR1 has been shown to affect cell survival, cell differentiation and cell proliferation of non-neuronal tissues (Skerry and Genever, 2001; Shin et al., 2008). Chen and colleagues demonstrated the ectopic expression of mGluR1 in mouse melanocytes was sufficient to induce spontaneous metastatic melanoma development in transgenic mouse models, TG3 and Tg(Grm1)EPv (E) (Pollock et al., 2003). The ectopic expression of human mGluR1 was also detected in human melanoma cell lines and biopsy samples. To date, ~175 melanoma biopsy samples from primary to metastatic lesions have ben examined and found GRM1 mRNA and protein to be expressed in ~ 60% of the samples (Pollock et al., 2003; Namkoong et al., 2007). Moreover, expression and activation of mGluR1 in melanoma cells has been shown to activate the MAPK and P13K/AKT pathways, two of the most frequently stimulated signaling cascades in melanoma (Marín et al., 2006; Shin et al., 2010).
Entity name
Breast cancer (triple-negative breast cancer)
Disease
Triple-negative breast cancer, are malignant tumors in breast tissue that lack estrogen receptor and progesterone receptor and amplification of the HER2 gene (Engebraaten et al., 2013).
Oncogenesis
Speyer and colleagues described mGluR1 expression as a potential oncogene in mammary breast pathogenesis. They detected mGluR1 expression in multiple triple-negative breast cancer cell lines (TNBC) (Speyer et al., 2012). This group also provided evidences that the growth of TNBC cells was inhibited when mGluR1 expression was reduced by an shRNA or treatment with mGluR1 antagonist, Bay36-7620 (Speyer et al., 2012).