Figure 1. Schematic representation of the genomic structure of human NAPA gene-transcript variant 1, (ENST00000263354). Exons are represented by red boxes while introns appear as waved black lines. The length of exons in (bp) is shown in the red boxes, and that of the introns is presented at the bottom blue boxes (not to scale). The relative position of ATG start and TAA stop codons are indicated with black arrows.

The NAPA gene spans 27,61 kb on chromosome 19q13 and consists of 11 exons and 10 introns (fig. 1) with an open reading frame of 1839 bp. The NAPA promoter has not been functionally explored.

The predominant transcript variant (1) of the NAPA gene encodes a functional protein of 295 amino acids. The second transcript of 1521 bp is predicted to encode a 256 amino acid protein. This variant (2) uses an alternate splice site in the 3 terminal exon, compared to variant 1. This variant is represented as non-coding because the use of the alternate splice site renders the resulting transcript a candidate for nonsense-mediated mRNA decay (NMD). The third transcript, variant (3), is 1668 bp. Variant (3) lacks two consecutive internal exons, compared to variant 1. This variant is also represented as non-coding because the use of the 5-most expected translational start codon, as used in variant 1, also makes this transcript a candidate for NMD. Additionally, 2 alternative transcribed variants are predicted to exist via the automatic annotation program, Havana. However, these predicted transcripts need to be experimentally confirmed.

The sequence of the predicted 295-amino acid; 33233 Da human protein encoded by NAPA shares 37%, 60%, and 81% identity with sequences in yeast (Sacharomyces cerevisiae), Drosophila melanogaster, and zebrafish (Danio rerio). NAPA belongs to a protein family comprised of, in higher eukaryotes, three homologues named NAPA, soluble NSF attachment protein beta (NAPB), and soluble NSF attachment protein gamma (NAPG) (Clary et al., 1990). Amino acid sequence comparison of bovine proteins show that NAPA and NAPB are most related to each other with 83% amino acid identity (Whiteheart et al., 1993). In contrast, NAPA and NAPG have only about 25% sequence identity. Structural information is available for the yeast homolog of NAPA, Sec17 (Rice and Brunger, 1999), and zebrafish NAPG (Bitto et al., 2008). Both homologs represent elongated proteins comprised of an extended twisted sheet of α-helical hairpins and a helical-bundle domain at the carboxy-terminal end.

NAPA is ubiquitously expressed in various mammalian cells and tissues. In mouse tissues, its expression level is highest in the brain, spleen, and testis (Whiteheart et al., 1993). Data from the human gene atlas has shown that NAPA is expressed at the highest level in heart, liver, lung, and placenta. Regulation of NAPA expression remains unexplored. One recent report demonstrated decreased protein levels of NAPA in brain synaptosomes of rats subjected to oxidative stress (Kaneai et al., 2013). 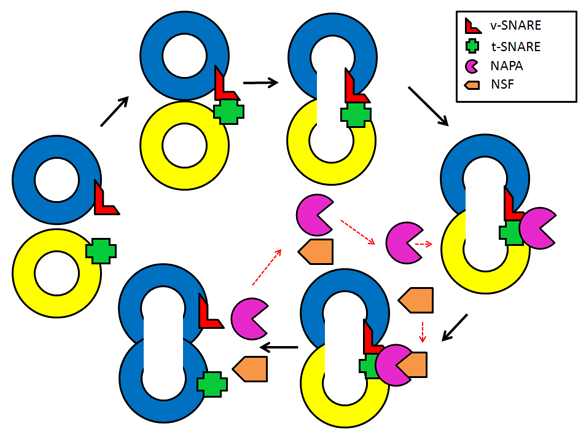 Figure 2. A model depicting vesicle fusion events according to the SNARE hypothesis. During the initial docking step, v-SNARE and t-SNARE bind creating a complex that drives pore formation and fusion of the two opposing membranes. After the fusion step, NAPA is recruited to the cys-SNARE complex allowing NSF binding. Next the ATPase activity of NSF and conformational changes of both NSF and NAPA disassemble the cys-SNARE complex, and release its components for recycling in subsequent fusion events.

A missense G to A transition that leads to a change from methionine to isoleucine (M105I) has been detected in mice (Chae et al., 2004; Hong et al., 2004). This mutation leads to the appearance of the so-called hyh (hydrocephalus with hop gait) phenotype and also impairs acrosomal exocytosis in sperm (Bátiz et al., 2009). Other mutations have not been found associated with this gene potentially because of the multiple roles of NAPA in critical cellular functions which would prevent survival of cells with dysfunctional NAPA mutations.

Entity name
Colorectal cancer
Note
A study utilizing patients with small undifferentiated colorectal cancer revealed a significant increase of NAPA immunoreactivity in cancer cells that correlated with a more aggressive course of the disease (Grabowski et al., 2002).
Entity name
Down syndrome
Note
One study has analyzed expression of NAPA protein in fetal cortex samples of patients with Down Syndrome. The study reported a significant decrease in NAPA expression compared to control samples that correlated with deterioration of the neuronal dendritic tree (Weitzdoerfer et al., 2001). Another study demonstrated a loss of NAPA homolog, NAPB, in brain specimens of adult patients with Down syndrome (Yoo et al., 2001).
Entity name
Huntingtons disease
Note
Marked elevation of NAPA expression was observed by Western blotting of hippocampus samples from patients with Huntingtons diseases as compared to age-matched controls (Morton et al., 2001).
Entity name
Atopic dermatitis
Note
A proteomic analysis of peripheral blood leukocytes demonstrated significant downregulation of NAPA expression in patients with atopic dermatitis as compared to control subjects (Kim et al., 2008). This decrease was validated by Western blotting analysis and NAPA level was suggested as a possible biomarker for the disease.