Human NNMT cDNA coding sequence (the exons are shown in lowercase type and are highlighted in different colours) and the amino acid sequence of the encoded protein (shown in single-letter code beneath the nucleotide sequence).

The human NNMT gene is approximately 16,5 kb in length, consists of 3 exons and 2 introns, and is mapped to chromosome 11q23.1. The first intron is 1,240 bp in length, while the second is approximately 14 kb long. The sequence of the 5-untranslated region (UTR) of the NNMT cDNA is present in exon 1, while the sequence of the cDNA 3-UTR is present in exon 3 (Aksoy et al., 1995). The initiation of transcription for the human NNMT gene occurs at or near a nucleotide located -108 bp upstream from the translation initiation codon and approximately 30 nucleotides 3-downstream from an atypical TATA box element (TCTAAA) (Aksoy et al., 1995). The 3-UTR ends with a poly(A) tract, and the polyadenylation signal ATTAAA is located 19 nucleotides upstream from the poly(A) region (Aksoy et al., 1994). A strong promoter is located within the initial 700 bp of 5-flanking sequence of the human NNMT gene (Yan et al., 1999).

Transcription of the human NNMT gene produces a full-length mRNA transcript of 1,579 bp. It was recently shown that NNMT expression in some thyroid cancer cells may be regulated by hepatocyte nuclear factor beta (HNF-1beta). HNF-1beta is able to function as a transcription activator of NNMT promoter, binding to specific sites in the basal promoter region (between nucleotides -148 and -162 relative to the translation initiation codon) (Xu et al., 2005). In BHP 18-21 papillar thyroid cancer cells, the histone deacetylase inhibitor depsipeptide reduces NNMT mRNA level through down-regulation of transcription activator HNF-1beta (Xu et al., 2006). Enhanced NNMT expression has been also correlated to activation of STAT3 in Hep-G2 liver cancer cells stimulated with IL-6 and in colorectal cancer tissues (Tomida et al., 2008).

No pseudogene of NNMT was reported in human.

The NNMT gene encodes a full-length monomeric protein of 264 amino acids with a predicted molecular weight of 29.6.

Nicotinamide N-methyltransferase (NNMT, EC 2.1.1.1) is an S-adenosyl-L-methionine (Ado-Met) -dependent enzyme that catalyzes the methylation of nicotinamide and other pyridines to form pyridinium ions (Rini et al., 1990).
NNMT was first identified by cDNA cloning from the liver and the protein is predicted to be present in the cytosol (Aksoy et al., 1995).
A radiochemical microassay was developed by Rini et al. (1990) to study selected characteristics of NNMT activity in human liver preparations.
These studies suggested that human hepatic NNMT is a cytoplasmic enzyme with a pH optimum of approximately 7.4. Apparent Km values for its two substrates, nicotinamide and S-adenosyl-L-methionine, are 347 and 1.76 µmol/l, respectively. The enzyme activity is inhibited by the reaction products, N1-methylnicotinamide and S-adenosyl-L-homocysteine, while its activity is not affected by inhibitors of other methyltransferases. Basal enzyme activities, detected in human liver biopsy samples, show large individual variations with a bimodal frequency distribution.
Aksoy et al. (1994) set out to clone and express a cDNA for human liver NNMT to study molecular mechanisms involved in the regulation of individual differences of NNMT activity in humans. The cloning strategy involved purification of human liver NNMT, leading to partial amino acid sequence, followed by direct PCR-based cloning with the use of the rapid amplification of cDNA ends (RACE). The combined use of these techniques resulted in the isolation of a human liver NNMT cDNA that was 969 bp long, with a 792-bp open reading frame that encoded a 264-amino acid protein with a calculated molecular mass of 29,600 Daltons. Transient expression of the protein encoded by this cDNA demonstrated that it catalyzed the methylation of nicotinamide and had biochemical characteristics similar to, or identical with, those of human liver NNMT.
Recently, 2-DE experiments revealed that NNMT exists in multiple spots in gastric tissues and the presence of multiple NNMT spots is highly specific to cancer tissues of stomach. This suggests that NNMT could receive a post-translational modification in cancer-specific manner, but the mechanism by which NNMT is modified is still unknown (Lim et al., 2006).

NNMT is a cytosolic enzyme.

NNMT is an important cytosolic methyltransferase, belonging to Phase II Metabolizing Enzymes. The enzyme catalyzes the N-methylation of nicotinamide, pyridines and other structural analogs, playing a crucial role in the biotransformation and detoxification of many xenobiotic compounds. In fact, the metabolism of drugs, toxic chemicals, hormones, and micronutriens is an important topic in the fields of pharmacology and endocrinology, and it is often implicated in many diseases and pathophysiological processes, such as cancer and resistance to chemotherapy (Szakàcs et al., 2004). N-methylation is one method by which drugs and other xenobiotic compounds are metabolized by the liver and the enzyme NNMT is responsible for this activity which uses S-adenosyl-L-methionine as the methyl donor. The NNMT reaction yields two products: S-adenosyl-L-homocysteine and N1-methylnicotinamide. S-adenosyl-L-homocysteine is converted into homocysteine by S-adenosyl-L-homocysteine hydrolase. N1-methylnicotinamide is mostly excreted into urine and partly further converted via catalysis by aldehyde oxidase to N1-methyl-2-pyridone-5-carboxiamide and N1-methyl-4-pyridone-5-carboxiamide, which are also excreted into urine. N-methylation has been proposed as a metabolic pathway for nicotinamide excretion, and NNMT is the only enzyme known to utilize nicotinamide as methyl acceptor substrate. Therefore, NNMT could participate in the regulation of nicotinamide intracellular levels, modulating its excretion after N-methylation. Nicotinamide, the amide of nicotinic acid, is the precursor of the coenzyme beta-nicotinamide adenine dinucleotide (NAD), an essential cofactor for several oxidoreductases, which participates in a wide range of biological processes, including energy supply, cellular resistance to stress or injury, and longevity (Williams et al., 2005). In addition, several enzymes, which use NAD as substrate can be inhibited by nicotinamide. Because of this type of product inhibition, the salvage and/or elimination of nicotinamide are crucial steps in NAD metabolism and the enzyme NNMT could be involved in controlling these cellular events. NNMT activity may also play a role in regulating biological processes related to N1-methylnicotinamide. It has recently become apparent that it possesses anti-inflammatory (Bryniarski et al., 2008), anti-thrombotic (Chlopicki et al., 2007), vasoprotective (Bartus et al., 2008), and gastroprotective (Brzozowski et al., 2008) properties. NNMT was characterized by Cantoni in 1951 (Cantoni et al., 1951) and it is highly expressed in liver where its activity displays a 5-fold variation among individuals and has a bimodal frequency distribution. This observation raises the possibility that this enzyme activity may be regulated by a genetic polymorphysm. Such a polymorphism could have functional implications for individual differences in the metabolism and therapeutic effect of drugs (Aksoy et al., 1994) and in the formation of potentially toxic pyridine metabolites. Moreover, heightened NNMT activity was reported in many kinds of tumours. The up-regulation of this enzyme suggests a possible role of NNMT in cancer growth, migration, and metastasis (Sartini et al., 2007; Wu et al., 2008). However, the biological significance of alterations in NNMT activity in various pathological conditions remains largely unknown.

NNMT belongs to the NNMT/PNMT/TEMT family. The amino acid sequence of the protein encoded by human liver NNMT cDNA is 52% identical to that of mouse thioether S-methyltransferase (TEMT) and 37, 39, 38 and 39% identical to those of human, rat, mouse, and bovine phenylethanolamine N-methyltransferase (PNMT), respectively (Aksoy et al., 1994).
Human NNMT shows a very high level of identity to other non-human NNMTs: Sus scrofa (88%), Rattus norvegicus (87%) and Mus musculus (85%).

In humans NNMT is highly polymorphic. About a hundred of polymorphisms, most of which are SNPs, have been identified. The figure A below shows the positions of investigated NNMT polymorphisms, taking as a reference the start site of transcription in 5UTR region.
An alternative NNMT gene organization is available at UCSC web site. This sequence, depicted in the figure B below, displays another putative 5UTR region located at 38,732 bp upstream of the open reading frame.
NNMT is one of at least 39 SAM-dependent methyltransferases and is involved in different metabolic pathways such as folate and homocysteine ones. Several independent studies have investigated some NNMT polymorphisms that could reflect differences in catalytic activity or in transcriptional efficiency of gene; however data available in literature are contrasting because some archived SNPs are very rare substitutions or limited to some ethnic group. Yan (Yan et al., 1999) and Smith (Smith et al., 1998) detected no association between SNPs (either insertion/deletion events within exons or into 5 flanking region) and NNMT activity variation in healthy population. Saito (Saito et al., 2001) suggested that some SNPs in the NNMT 5 flanking region may influence its transcriptional efficiency. Several studies about association between NNMT genetic variations and alteration of cellular pathways are present in literature.

Homocysteine (Hcy) pathway. In humans, the only source of Hcy is the demethylation of methionine, through several methyl transferase activities, such as NNMT. Hyperhomocysteinemia is a condition characterized by high plasma level of Hcy and it is implicated in several diseases, as Alzheimer and other clinical status such as atherosclerosis, ischemic strokes (Furie et al., 2006) and osteoporosis. The causes of hyperhomocysteinemia are both genetic and environmental (e.g.: life-style, sex, age), but genetic basis are still poorly understood. Different studies have investigated an association of NNMT polymorphisms with hyperhomocysteinemia. Souto (Souto et al., 2005) carried out the GAIT (Genetic Analysis of Idiopathic Thrombophilia) Project in a Spanish population, where 10 SNPs of NNMT gene were investigated. The results of this study suggested a strong correlation between plasma Hcy level and a specific haplotype. Because these genetic variants are in non-coding regions, they could influence the regulation of transcription but evidence on the functionality of the NNMT polymorphisms is still conflicting.
A consistent study was carried out by Ling Zhang (Zhang et al., 2007) in about three hundred healthy japanese workers. Authors focused on a specific NNMT polymorphism (rs694539) localized in the first intron. The results confirmed that SNPs in non-coding regions affected the regulation of transcription, but they werent the main determinant of the plasma Hcy levels, because other factors were involved: age, sex, plasma folate levels and the associations with MTHFR polymorphisms.
The association between NNMT polymorphisms and hyperhomocysteinemia has been investigated by Bathum (Bathum et al., 2007). Six hundred and three danish adult twin pairs were included in the study. Experimental results suggested that MTHFR C677T is the only SNP responsible for the disease progression, leaving only minor influence to other genetic variations. 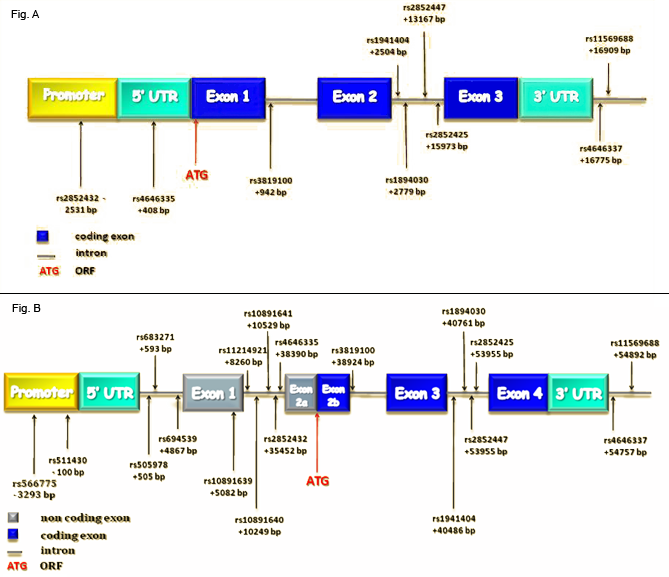