The PAX3 gene extends approximately 100 kb and consists of 10 exons.

In human tissues and tumors, seven alternatively spliced transcripts have been described. The abundant transcripts, which have been studied in neural-related tumor specimens and cell lines, appear to consist of the first eight or nine exons (PAX3c and PAX3d). In addition, there is also frequent alternative splicing at the 5 end of exon 3 in human tissues and tumors that results in inclusion or exclusion of a single codon encoding a glutamine residue.

Based on experiments in the mouse, Pax3 is expressed in the spinal cord and selected regions of the brain. Pax3 is expressed in the neural crest and is involved in development of neural crest derivatives including spinal ganglia, melanocytes and Schwann cells. Pax3 expression is also detected in somite compartments that give rise to embryonic skeletal muscle progenitors, and in cells that give rise to skeletal muscle compartments of the developing limb buds. In addition, Pax3 (as well as Pax7 ) is also expressed in a proliferating population without skeletal muscle specific markers that reside within limb and trunk muscles throughout later development; and a subset of adult muscles subsequently contain Pax3-expressing satellite cells.

PAX3 is a transcription factor characterized by three highly converved motifs in the N-terminal region: a paired box DNA binding domain, an intervening octapeptide of unclear function, and a homeobox DNA binding domain. The C-terminal region contains a proline-, serine- and threonine-rich transactivation domain.
Based on the studies of the mutant Pax3 alleles in the mouse (Splotch phenotype) as well as studies of patients with mutant PAX3 genes (see below), Pax3 is postulated to have a crucial role in the development of the early neural structures, derivatives of the neural crest, and skeletal musculature. In these developmental processes, there is evidence that the transcriptional function of Pax3 impacts at four biological activities:
1. proliferation
2. apoptosis
3. differentiation
4. motility

PAX3 shares homology through the conserved paired box with eight other members of the PAX gene family. In particular, within the PAX gene family, PAX3 and PAX7 constitute a subfamily characterized by a paired box, intervening octapeptide and complete homeobox as well as homology between the C-terminal transcriptional activation domains.

Germ-line sequence changes involving the PAX3 gene are found in Waardenburg syndrome type I and type III, a non-neoplastic autosomal dominant disorder characterized by hearing loss and pigmentary abnormalities. The majority of these alterations are nucleotide substitutions resulting in missense mutations, usually in the regions encoding the paired box or homeobox. A smaller number of base substitutions at splicing sites and small deletions and insertions, which usually alter the reading frame, have also been reported. Finally, there have also been several cases of large deletions and other rearrangements of chromosome 2.

The PAX3 gene is rearranged by the characteristic and recurrent acquired chromosomal translocation - t(2;13)(q35;q14) - in the myogenic soft tissue cancer alveolar rhabdomyosarcoma. As a result of this 2;13 translocation, portions of the PAX3 gene are juxtaposed with portions of the FKHR (also called FOXO1A) gene on chromosome 13. In particular, the 5 region of PAX3 including the first seven exons is joined to the 3 region of FKHR including its last two exons. Though the reciprocal chimeric gene is also generated, this PAX3-FKHR chimeric gene is more consistent and highly expressed, and results in expression of a fusion protein consisting of the intact PAX3 N-terminal DNA binding domain fused in-framed to the intact FKHR C-terminal transcriptional activation domain. This fusion protein functions as an aberrant transcription factor. In rare cases of alveolar rhabdomyosarcoma, PAX3 is fused to alternative C-terminal partners - MLLT7 (AFX, FOXO4) and

Entity name
Alveolar Rhabdomyosarcoma (ARMS)
Disease
ARMS is one subtype of a family of pediatric soft tissue tumors that is related to the skeletal muscle lineage. In contrast to the embryonal rhabdomyosarcoma (ERMS), the other major subtype in this family, ARMS often occurs in adolescents and young adults, with primary tumors located in the vicinity of skeletal muscle, such as in the extremities and trunk.
Prognosis
In contrast to the favorable outcome in most cases of ERMS, ARMS is associated with an unfavorable prognosis. In the IRS-IV clinical trial, the three year failure-free survival rate was 66% for patients presenting without metastatic disease and 16% for patients presenting with metastatic disease (compared to 83% and 37% for non-metastatic and metastatic ERMS, respectively). This unfavorable prognosis in ARMS is related to the propensity for early and wide dissemination, often involving bone marrow, and to poor response to chemotherapy.
Cytogenetics
Chromosomal studies identified nonrandom chromosomal translocations that distinguish the majority of ARMS tumors from ERMS and other pediatric solid tumors. The t(2;13)(q35;q14) translocation is the most prevalent and the t(1;13)(p36;q14) is identified in a smaller subset of cases.
Hybrid gene
The 2;13 or 1;13 chromosome translocation juxtapose the PAX3 gene on chromosome 2 or the PAX7 gene on chromosome 1 with the FKHR (FOXO1A) gene on chromosome 13 to generate two chimeric genes. These chimeric genes are transcribed to generate chimeric transcripts, of which the PAX3-FKHR and PAX7-FKHR transcripts are the most highly and consistently expressed of the pair of potential products. Based on RT-PCR assays for these chimeric transcripts, approximately 60% of ARMS cases express PAX3-FKHR and thus contain the t(2;13), 20% express PAX7-FKHR and thus contain the t(1;13), and 20% are fusion-negative. 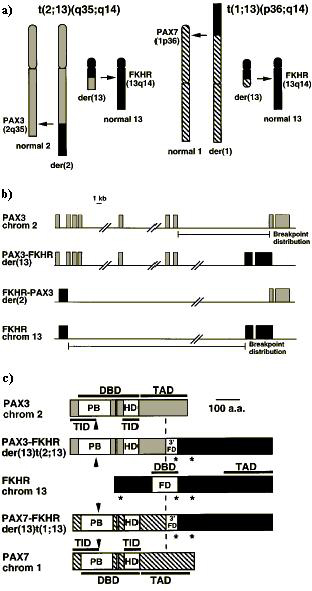 a) Diagram of t(2;13)(q35;q14) and t(1;13)(p36;q14) chromosomal translocations generating PAX3-FKHR and PAX7-FKHR fusions
b) Generation of chimeric genes by the t(2;13)(q35;q14) translocation in ARMS. The exons of the wild-type and fusion genes are shown as boxes above each map and the translocation breakpoint distributions are shown as line segments below the map of the wild-type genes.
c) Comparison of wild-type and fusion products associated with the 2;13 and 1;13 translocations. The paired box, octapeptide, homeobox and fork head domain are indicated as open boxes, and transcriptional domains (DNA binding domain, DBD; transcriptional activiation domain, TAD; transcriptional inhibitory domain, TID) are shown as solid bars. The sites phosphorylated by Akt are indicated by stars, and the alternative splice in the paired box is shown by an arrowhead. The vertical dash line indicates the translocation fusion point. {Reproduced from: Barr (2001) Oncogene 20: 5736- 5746}
Oncogenesis
The PAX3-FKHR and PAX7-FKHR chimeric genes encode fusion proteins that contain the intact DNA binding domain of PAX3 or PAX7 in the N-terminal region fused in frame with a C-terminal FKHR (FOXO1A) segment containing the transactivation domain. The chromosomal changes in ARMS result in high level expression, potent transcriptional activity, and constitutive nuclear localization of the PAX3-FKHR or PAX7-FKHR fusion products. The end result is exaggerated activity at multiple biological levels that converges to inappropriate activation of PAX3/PAX7 target genes and ultimately contributes to tumourigenic behavior.
Entity name
Waardenburg syndrome (type I et III)
Disease
Waardenburg syndrome (WS) is an inherited autosomal-dominant disorder characterized by sensorineural hearing loss (of varying severity), dystopia canthorum (lateral displacement of inner corners of eye), and pigmentary disturbances of the eye, skin and hair. It is a common cause of inherited deafness in infants. Depending on additional symptoms, WS is classified into four types, WS1, WS2, WS3, and WS4, with only WS1 and WS3 being associated with PAX3 mutations. Deletions, insertion, base pair substitution, or dominant point mutations of PAX3 cause WS1 and WS3. WS3 (Klein-Waardenburg syndrome) is similar to WS1 but WS3 is also characterized by musculoskeletal abnormalities, usually involving the upper limbs. It should be noted that WS3 is often associated with deletions of the long arm of chromosome 2 involving multiples genes including PAX3 whereas WS1 is generally is associated with mutations within the PAX3 gene. WS2 is heterogenous, being caused by mutations in the MITF gene in some but not all affected families. WS4 is caused by mutations in the EDN3, EDNRB, or SOX10 ID genes.
Entity name
Craniofacial-deafness-hand syndrome (CDHS)
Disease
Craniofacial-deafness-hand syndrome is inherited as an autosomal dominant mutation. CDHS shows clinical characteristics of the absence or hypoplasia of the nasal bones, profound sensorineural deafness, a small and short nose with slitlike nares, hypertelorism, short palpebral fissures, and limited movement at the wrist and ulnar deviations of the fingers. A missense mutation (Asn47Lys) in the paired domain (exon 2) of PAX3 was detected in a family of three (a mother and two children) first reported with this syndrome. 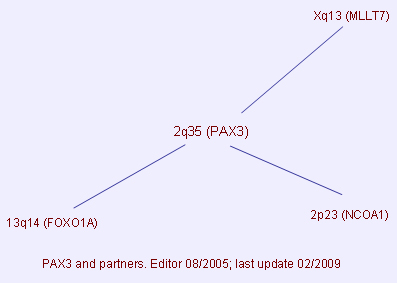