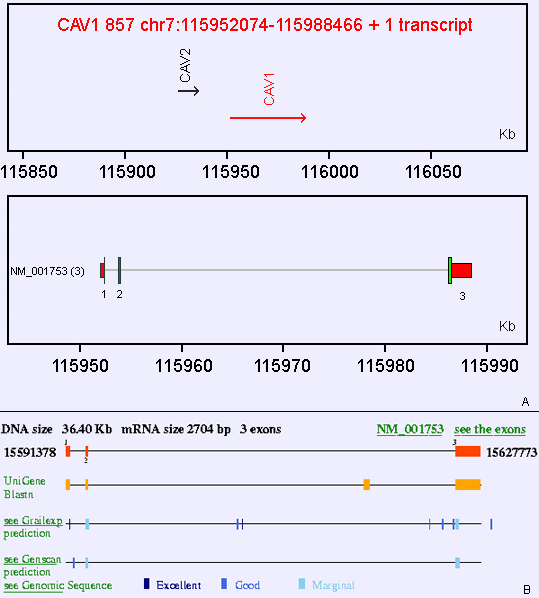 The gene consists of 3 exons (respectively 30, 165 and 342 bp long) separated by two introns of 1.5 kb and 32 kb. Two isoforms have been identified: caveolin-1alpha (corresponding to the 2-178 sequence) and caveolin-1beta (corresponding to the 32-178 sequence). The two isoforms are generated by alternative splicing of the CAV1 gene (Kogo et al., 2000) and by alternative initiation of the same mRNA translation (Shatz et al., 2008). 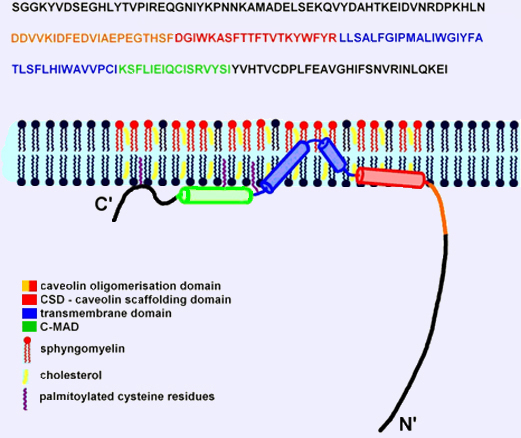 Structure of caveolin-1. Primary structure of caveolin (upper part of the image) with aminoacids colored to illustrate classic domains considered within its molecule. Tertiary structure of caveolin depicted in the lower part of the image shows: 4 alpha-helices, one corresponding to CSD partially embeded in the membrane, 2 alpha-helices corresponding to the transmembrane domain and an alpha helix in C-terminal end with variable length according to different authors. A beta-sheet organized region is also thought to exist in the oligomerisation domain of CAV1.

CAV1 (21-24kDa) is an integral membrane protein, expressing two isoforms (alpha and beta) of different length and distinct potential in caveolae formation. The full length CAV1 (isoform alpha, 178 aminoacids) has a hairpin-like structure spanning the plasmatic membrane, both C- and N-termini facing the cytosol. The beta isoform is 31 aminoacids shorter and is translated from the same mRNA as the longer form, but at divergent translation initiation sites. Both isoforms have two hydrophilic domains at the C- and N-termini, that flank a hydrophobic central domain. Several functional domains were defined. The membrane attachment domains are located at the N- and C-termini and are designated as N-MAD (residues 82-101) and C-MAD (residues 135-150). CAV1 containes palmitoylation sites on Cys 133, 143 and 156, involved in membrane anchorage. The central region (residues 102-134) (TMD) was first suggested to be the transmembrane domain, but, after predicting its beta-sheet rather than alpha-helix conformation, it was suggested that it is involved in hetero-oligomerization of CAV1 with caveolin-2 and in specific interactions with other proteins. The caveolin scaffolding domain (CSD), located at the N-terminus (aminoacids 82-101), is involved in the binding and inhibition of proteins containing a defined caveolin binding motif, such as ωxxxxωxxω or ωxωxxxxω - where ω is an aromatic aminoacid (Trp, Phe or Tyr). The oligomerization domain (aminoacids 61-101) contains CSD and directs the formation of homooligomers (14-16 CAV1 molecules), which interact with cholesterol and signaling molecules.
The structure of CAV1 underlies two separate important functions of the protein: membrane attachment and protein-protein interaction. CAV1 is reported to be involved in various cellular functions, like vesicular transport and regulation of signal transduction in cellular adhesion, growth, and survival.

The table below shows the expression of CAV1 in different organs and tissues. 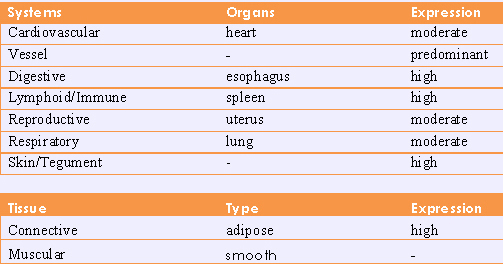 CAV1 is localized in the cytoplasmic side of the peripheral membrane of the cell in caveolae and in the Golgi apparatus membrane.
Membrane protein of caveolae. Potential hairpin-like structure in the membrane. 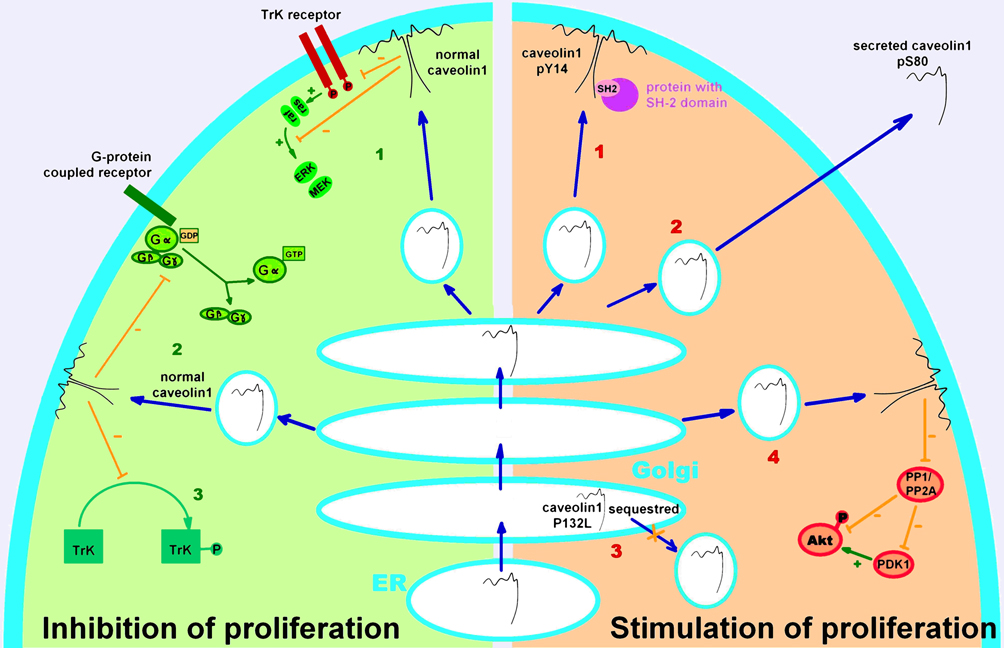 - Transforming suppressor activity in T cell leukemia.
- Playing a functional role in a novel post-Golgi trafficking pathway.
- Playing a crucial role in the mechanisms that coordinate lipid metabolism with the proliferative response occurring in the liver after cellular injury.
- Being essential for liver regeneration.
- Regulating the trafficking of SLC1A1 on and off the plasma membrane.
- As an important regulator of downstream signaling and membrane targeting of EPHB1.
- CAV1 represents a key switch between tumor suppression and metastases promotion. 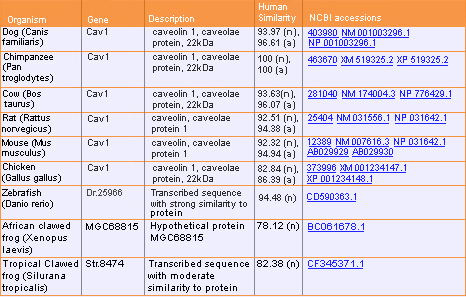 The table above shows the homology of CAV1 with different organisms.