less than 1% of morphologic M3 AML.

high incidence at diagnosis of disseminated intravascular coagulation; poor response to ATRA at induction therapy, in contrast with the classical M3 AML with t(15;17).

high rate of normal or dystrophic promyelocytes in peripheralblood and in bone marrow; no intracytoplasmic Auer rods; myeloperoxydasereaction positive; immunocytochemical detection with an anti-PLZF shows adistinct punctate nuclear distribution of the protein, suggesting itscompartmentalization in the nucleus. 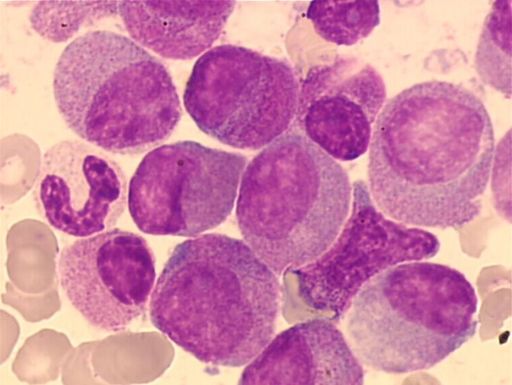 In patients with t(11;17)(q23;q21), t(5;17)(q35;q21), and t(11;17)(q13;q21) where RARa is fused to the PLZF (promyelocytic leukemia zinc finger), NPM (nucleophosmin) and NuMA (nuclear mitotic apparatus) genes respectively, chromosome 17 and RARa but not PML are involved. Patients were initially reported as having M3 morphology. Interestingly, the t(11;17)(q23;q21) PLZF/RARa subgroup showed a clearly morphological differences with predominance of cells with regular nuclei, many granules, usually no Auer rods, increased number of pseudo Pelger-Huet cells and a strong MPO activity. These particular characteristics could allow the definition of a separate morphological entity among APL. Patients with t(5;17)(q35;q21) are too rares to draw any morphological correlation - Text and iconography Courtesy Georges Flandrin 2001.

distinctly worse prognosis than M3 AML with t(15;17), mainlybecause the patients fail to respond to the maturation effect of ATRA.

fusion of distal PLZF probe with RARa on 17q21.

no recurrent additional anomaly are known.

the translocation involves a breakpoint in the zinc fingerregion of PLZF, with fusion of two zinc fingers to the RARa B region toform a 5 PLZF - 3 RARa fusion gene; the reciprocal 5 RARa - 3 PLZF genefuses seven zinc fingers to the RARa region; RARas breakpoint occurs in1- as a result of thealternative splicing of PLZF gene, two forms of PLZF-RARa protein can be detected: , b) PLZF(B)-RARa (858 amino acids; 93 kDa) differing from form A by the inclusion of a 123 amino acid prolin rich segment of PLZF; PLZF-RARa protein is an abnormal retinoic acid receptor with reduced and modified DNA-binding and transcriptional activities.
, 2- Two forms of RARa-PLZF protein are also detected, due to involvement of alternative promoters of the RARa gene: RARa(A1)-PLZF (277 amino acids; 31 kDa) and RARa(A2)-PLZF (274 amino acids; 31 kDa), composed of A1 or A2 transcriptional activation domain of RARa linked to the seven C-terminal zinc fingers of PLZF.

both 5 PLZF -3 RARa and 5 RARa - 3 PLZF transcripts aredetected by RT-PCR, and both fusion partners would be implicated inleukemogenesis; four chimeric transcripts are produced, due to alternativesplicing of PLZF gene and to transcription of either A1 or A2 domain ofRARa gene

a) PLZF(A)-RARa (735 amino acids; 81 kDa) composed of the N-term part of PLZF including POZ domain and two of the nine zinc fingers, fused to the DNA and ligand binding domains of RARa