The cell of origin is thought to be a precursor B-lymphoblast. These cells are positive for terminal deoxynucleotidyl transferase, CD19, cytoplasmic CD79a, CD10, CD24. Variable expression for CD20 and CD22 may be seen. The myeloid lineage markers CD13 and CD33 may also be expressed

The presenting features of lymphoblastic leukemia include evidence of bone marrow failure including anemia, thrombocytopenia, and leukopenia. The leukocyte count may be elevated, normal, or even decreased. Other signs and symptoms may include hepatosplenomegaly, lymphadenopathy, bone pain, and arthralgias. A small number of patients may present with lymphoblastic lymphoma.
Isochromosome 9q is generally associated with patient age greater than 10 years and a pre-B cell immunophenotype. In a series of 28 patients with i(9q), patients ranged in age from 1 to 17 years (median age 8 years). 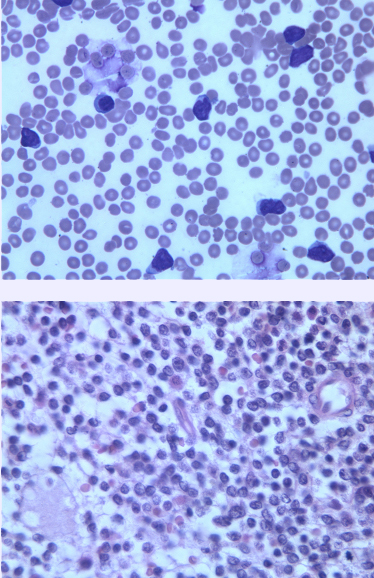 The cells of lymphoblastic lymphoma may demonstrate a range of sizes. They may vary from small round cells with high nuclear-cytoplasmic ratios to larger cells with more cytoplasm (usually blue to grey-blue cytoplasm). Nuclear chromatin is usually uncondensed. Nucleoli are generally inconspicuous.

Treatment is divided in induction, consolidation, and maintenance chemotherapy. Three drug induction chemotherapy including vincristine, a steroid (e.g. dexamethasone), and L-asparaginase in conjunction with intrathecal therapy induces a complete remission rate greater than 95%. Daunorubicin may be added for high risk patients. Consolidation therapy may involve high-dose methotrexate, the same drugs used in induction, or other drug combinations. Maintenance therapy in most protocols typically involves the use of oral methotrexate (weekly) and daily oral mercaptopurine.

Precursor B-cell lymphoblastic leukemia progresses quickly if left untreated; however, this disease is one of the most curable cancers with survival rates now at its all-time peak. Older and very young patients tend to have lower survival rates

The prognosis of B-cell lymphoblastic leukemia is excellent. The overall complete remission rate is approximately 95% in pediatric patients and around 70-75% for adults.

isochromosome 9q was found associated with other non-random chromosomal abnormalities including t(1;19)(q23;p13) (involving the PBX and E2A genes), a finding in 4 of 28 cases, and t(9;22)(q34;q11) (involving fusion of the BCR and ABL genes) in one case. In a series of ten Down syndrome patients, i(9q) was identified in 3 of 10 cases. 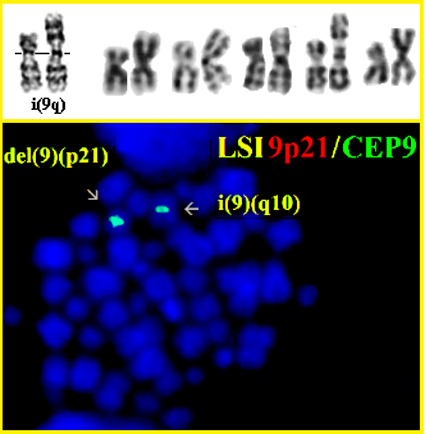 i(9q)  iso (9q) G- banding - Courtesy of Andrew Carroll (Left); - Courtesy Adriana Zamecnikova (five rtight). Fluorescence in situ hybridization with LSI CDKN2A/CEP9 probe (Vysis/Abbott molecular, US) showing deletion of CDKN2A located on 9p (red signal) as a result of isochromosome formation (A) and deletion of both genes as a result of simultaneous 9p deletion and isochromosome formation (B).