Several t(7;11)(p15;p15) have been reported in myeloid neoplasms. The most common is the one leading to a fusion between the NUP98 (11p15) and the HOXA9 (7p15). A more rare t(7;11) is the one that leads to a fusion between the NUP98 and the HOXA13 gene on 7p15. This particular t(7;11) is associated primarily with acute myeloid leukemia (AML), primarily FAB M2 and M4. However, it has been reported also in one case of chronic myelogenous leukemia (CML) in blast crisis. The NUP98/HOXA13 fusion protein is thought to promote leukemogenesis through inhibition of HOXA13-mediated terminal differentiation and/or aberrant nucleocytoplasmic transport. . The protein encoded by the NUP98/HOXA13 fusion gene is similar to the one encoded by the NUP98/HOXA9 fusion, and the expression pattern of the HOXA13 gene in leukemic cell lines is similar to that of the HOXA9 gene, suggesting that the NUP98/HOXA13 fusion protein may play a role in leukemogenesis through a mechanism similar to that of the NUP98/HOXA9 fusion protein.

The prognosis in this single case of AML is unfavorable.

The patient is a 39 year-old man referred for leukocytosis, mild anemia, thrombocytopenia, and splenomegaly. CML in blast crisis was diagnosed on peripheral blood and bone marrow smears.

Patient was treated initially with hydroxyurea, followed by Dasatinib but did not respond. High-dose ARA-C and subsequent bone marrow transplantation from a HLA haploidentical brother, were also unsuccessful.

The prognosis in this single case of CML in blast crisis is unfavorable. 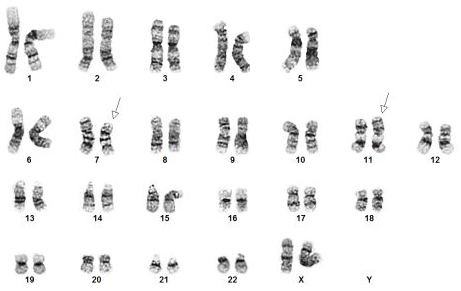