Review on plasmablastic lymphoma, with data on clinics, and the genes involved.

The cell of origin involved in plasmablastic lymphoma (PBL) is the plasmablast. The current belief is that the plasmablast is derived from a post-germinal center B-cell that has undergone preterminal differentiation via somatic hypermutation and class switching recombination to resemble a plasma cell rather than a B-cell (Castillo et al., 2008; Hsi et al. 2011). The plasma cell markers VS38c, CD38, multiple myeloma oncogene-1 (MUM1), and CD138 (syndecan-1) seem to be almost universally expressed in PBL. There is little to no expression of the leukocyte common antigen (CD45) or the B-cell markers CD20, CD79a, and PAX5. However, there is some distinction in the immunophenotype between HIV-positive and HIV-negative patients with PBL. HIV-positive patients seem to show a greater expression of CD20 and CD56 compared to HIV-negative patients (Folk et al., 2006). The immunophenotypic similarities between PBL and plasmablastic or anaplastic plasma cell myeloma (PCM) might be challenging for the diagnosis (Vega et al., 2005). Therefore, it is important to look carefully at additional features that are unique and might help in differentiating these 2 neoplasms. It should be noted that PBL is strongly associated with HIV infection and EBER positivity, whereas PCM patients present with monoclonal paraproteinemia, hypercalcemia, renal dysfunction, and lytic bone lesions. For cases that continue to be indistinguishable based on immunophenotypic and clinical findings, the presence of a MYC (8q24.2) translocation, which tends to occur in most PBL patients, might be used as a marker in the identification of PBL (Taddesse-Heath et al., 2010).

PBL is a rare aggressive B-cell lymphoma strongly associated with HIV infection. It makes up approximately 2% of all HIV-related lymphomas. According to a recent study (Castillo et al., 2015), over 600 patients with this lymphoma have been reported in a period of 15 years. The majority of these patients (63%) were HIV-positive and 28% were HIV-negative. Furthermore, according to the Castillo and co-authors report, 3% of PBL arose from preexisting lymphoproliferative neoplasm via transformation, and about 6% arose in patients that had undergone solid organ transplant. The disease is more common in males than females (4;1). PBL is reported to occur at all ages but is very rare in children (approximately 3% of all reported cases were children, for the most part HIV-positive patients).

There are differences in the clinical presentation of PBL in patients with and without HIV infection. First of all, the majority of patients with PBL are HIV-positive male patients. Interestingly, most female patients with PBL do not have HIV, in sharp contrast with the male population (Morscio et al., 2008). Most of the HIV-positive patients present with extranodal disease particularly affecting the oral cavity (Delecluse et al., 1997; Cattaneo et al., 2005), followed by the gastrointestinal tract (Luria et al., 2014), and skin (Jambusaria et al., 2008). Furthermore, most patients in this group present with advanced clinical stage (stages III or IV) with frequent bone marrow involvement. Patients without HIV develop PBL at an older age (median age: 55 years) than the HIV-positive patients (median age: 42 years). PBL of non-immunocompromized patients is more variable as far as sites of involvement. However, the oral cavity is still the most common presentation. Advanced clinical stage and bone marrow involvement is less common in this group than in the immunocompromized individuals (Morscio et al., 2014). PBL has been reported to occur also in solid organ post-transplant patient. The majority of these patients received a transplant of the heart, followed by the kidney, hematopoietic stem cell, lung, liver, and pancreas. Sites of involvement in this group of patients typically are the lymph nodes, followed by the skin. Approximately 50% of these patients had advanced stage disease (Morscio et al., 2014).

The cells involved in PBL are the plasmablasts, which are large cells characterized by abundant cytoplasm and prominent nucleoli similar to large immunoblasts. The plasmablasts features are particularly evident in the oral mucosa of HIV-positive patients. On the other hand, when PBL occurs in HIV-negative patients, the neoplastic cells resemble differentiated plasma cells with larger nuclei and basophilic cytoplasm (Hsi et al. 2011). Occasional "cherry red" nucleolus might be seen in the plasmablasts. The typical surface markers of mature B cells, such as CD20 and CD45, are usually down regulated in these cells. Similarly, PAX5 and BCL6 are also down regulated. Instead, these cells now express cells surface markers typically expressed by plasma cells, i.e., VS38c, CD38, multiple myeloma oncogene-1 (MUM1), and CD138 (syndecan-1). 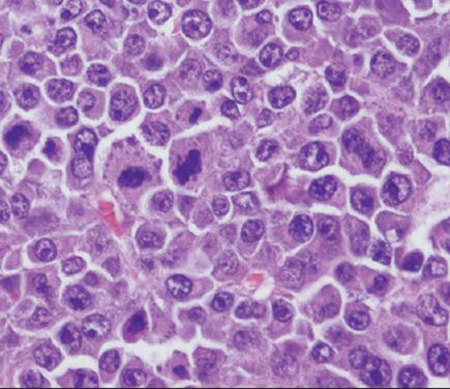 The prognosis of patients with PBL is poor with a median overall survival (OS) between 8 and 15 months (Castillo et al., 2008). Specifically, the median OS for HIV-positive patients is on average 10 months, for HIV-negative immunocompetent is on average 11 months, and for post-transplant patients is on average 7 months (Morscio 2014). According to the International Prognostic Index (IPI) scoring system for aggressive lymphoma, several factors affect the prognosis and survival, such as age, performance status, LDH levels, bone marrow involvement, number of extranodal sites, and clinical stage. Studies, however, are controversial on which factor(s) play a bigger part in the prognosis of PBL. Some researchers in this field indicated that age, LDH levels, and bone marrow involvement do not affect outcomes (Castillo et al., 2012), whereas other investigators found that age, LDH levels, and Ki-67 levels ≥80% were the main factors associated with adverse outcomes (Schommers et al., 2013). Furthermore, HIV-positive patients with a MYC translocation have been found to have a very short OS (Taddesse-Heath et al., 2010; Castillo et al., 2012). Treatment seems to ameliorate the outcome versus patients that receive no treatment at all. However, currently, the use of cyclophosphamide, doxorubicin, vincristine and prednisone (CHOP) is considered an inadequate therapy, and current guidelines recommend more intensive regimens such as infusional etoposide, vincristine, and doxorubicin with bolus cyclophosphamide and prednisone (EPOCH) (Sparano et al., 2010). As PBL is a very aggressive lymphoma, there is a need for novel therapies such as those targeted against EBV or MYC protein overexpression (Perrine et al., 2007; Gebauer et al., 2015; Delmore et al., 2011). 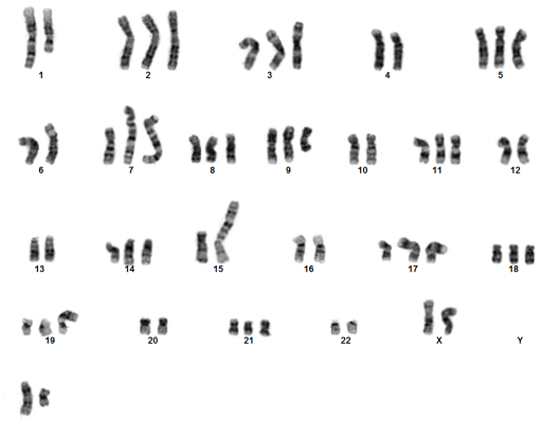 The most consistent cytogenetic finding in PBL is the presence of a MYC (8q24.2) translocation (Bogusz et al., 2009; Taddesse-Heath et al., 2010; Valera et al., 2010) typically involving one of the immunoglobulins, IGH (14q32.3), IGK (2p11.2), or IGL (22q11.2). The end result of these translocations is the overexpression of MYC. Interestingly, all of these IG-MYC translocations seem to occur at similar frequency as opposed to Burkitt lymphoma where the most common IG-MYC translocation is the t(8;14)/IGH-MYC, followed by t(8;22)/IGL-MYC and t(2;8)/IGK-MYC. The IG/MYC translocations in PBL are frequently associated with EBV infection particularly in endemic and immunodeficiency-associated tumors, similar to what happens with Burkitt lymphoma (Dong et al., 2005).

PBL karyotypes are generally complex. An interesting finding that is noticeable in the karyotypes of PBL patients, is that some of the chromosome abnormalities are similar to those observed in PCM, particularly gain of 1q, loss of 1p, deletions 13q and/or 17p/TP53, and the simultaneous gain of odd-numbered chromosomes, specifically +3, +5, +7, +9, +11, and/or +15 (Taddesse-Heath et al., 2010). Since similar karyotypes can also be observed in some aggressive (anaplastic) PCM, it is important to take into consideration all available clinical information to differentiate these two entities.

Note
The translocations involving MYC occur primarily with the immunoglobulin loci, suggesting that MYC activation plays a crucial role in the development of PBL. It has been shown also that the transcription factor PRDM1 (BLIMP1) is highly expressed in PBL (Montes-Moreno et al., 2010). One of the functions of this gene is to repress genes that maintain mature B-cell identity such as PAX5 and those that are involved in cell proliferation such as MYC. Therefore, the frequent incidence of MYC translocation in PBL may be an oncogenic mechanism that overcomes the repressor effect of BLIMP1.