Over the past 50 years, a relevant progress has been made toward our understanding of classical Hodgkin lymphoma pathology and cell biology. Histologic classification evolved through different systems to the 2008 World Health Organization classification, upgraded in 2016.

Most patients present with limited disease (Ann Arbor stage II disease) and B symptoms. Mediastinal involvement occurs in 80% of cases, usually with Bulky disease. Splenic and/or lung involvement, as well as bone and bone marrow involvement, are less frequent.

Based on the characteristics of the Hodgkin and Reed-Sternberg (HRS) tumour cells (lacunar cells, multinucleated giant cells, pseudosarcomatous cells) and of the reactive infiltrate, four histologic subtypes of classical Hodgkin lymphoma (cHL) have been distinguished: lymphocyte-rich cHL (LRCHL), nodular sclerosis (NS) cHL, mixed cellularity (MC) cHL, and lymphocyte depletion (LD) cHL. Most cHL can be classified as NS or MC subtypes.
NS is a subtype of cHL characterized by sclerosis, diagnostic HRS cells and other tumour cells displaying a "lacunar" type morphology. The architectural pattern consists of grouped lacunar cells in lymphoid nodules surrounded by collagen bands. NScHL may have a cellular proliferation of fibroblasts, in addition to the sclerotic component. The amount of sclerosis varies markedly from case to case, from ample sclerosis (total sclerosis phase of NS) to a paucity of collagen associated with abundance of lacunar cells (cellular phase of NS).

Classical Hodgkin lymphoma is a distinct neoplastic entity with heterogeneous epidemiological features. It accounts for approximately 10% of all malignant lymphomas (Stein et al., 2008).Classical HL is the most common cancer in patients under 20 years (adolescents and younger adults). The first peak of incidence can be observed in patients under 35 years of age, whereas a second incidence peak can be observed in the elderly (Hjalgrim et al, 2008; Stein et al., 2008).
NScHL accounts for approximately 70% of cHL in Europe and USA and is more common in resource rich than in resource poor areas. The incidence of NScHL is similar in males and females and peaks at ages 15-34 years. 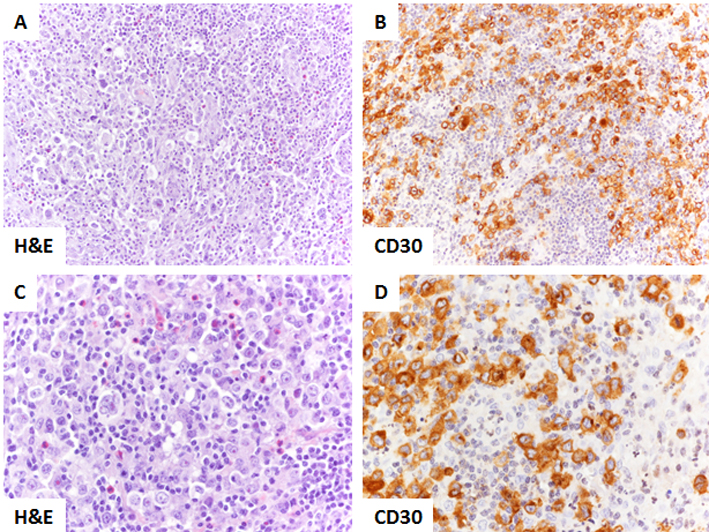 Figure 1. "cellular phase" of NScHL. (A) In this variant of NScHL the lacunar cells are numerous. Moreover, they differ morphologically. (B) Grouped lacunar cells show CD30 membranous localization. (C) At higher magnification most lacunar cells appear to be separated from the adjacent lymphoid cells by a clear space. (D) Several sheets of CD30+ lacunar cells with combined membranous and Golgian immunostain.

The recognition of NScHL is based on the presence of HRS cells and lacunar cells, the specific tumour cells of NScHL. Binucleated and multinucleated HRS cells with bi- or multinucleation and huge nucleoli are pathognomonic for cHL identification. The lacunar cells tend to have more lobated nuclei with less prominent nucleoli and a large amount of cytoplasm than HRS cells in other subtypes of cHL. In formalin-fixed tissues the cytoplasm of the lacunar cells shows retraction so that the cells seem to be located in a lacuna. In the so called "syncytial variant", lacunar cells may be grouped, forming cellular islands which may be associated with necrosis.

Involved tissues by NScHL exhibit a nodular growth pattern with tumour nodules surrounded by collagen bands. Broad bands of fibroblast-poor collagen may be scarce/absent (cellular phase of NS) or surround one nodule (early sclerosis of NS) or several nodules (classical nodular sclerosis). The fibrosing process may progress to reach a complete thickening of the nodules (total sclerosis of NS).
Lacunar cells usually resides in an inflammatory cell microenvironment. In NScHL, like in other cHL subtypes, microenvironmental cell types include T- and B-reactive lymphocytes, eosinophils, granulocytes, histiocytes/macrophages, plasma cells, mast cells, and fibroblast-like cells (Aldinucci et al., 2010). The cellular background found in the nodules is variable. The nodules may be with lymphocyte predominance, mixed or with lymphocyte depletion. The cellular composition of the backgrounds of the nodules parallel those of non NS subtype of cHL 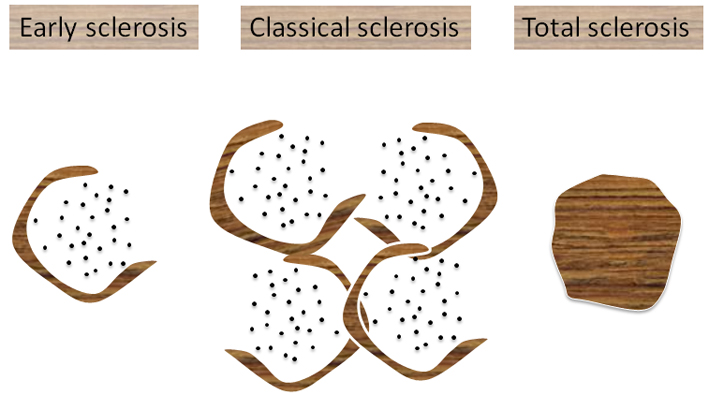 EBV infection
EBV is found in HRS cells preferentially in cases of MC and LD cHL, and less frequently in NS and LRCHL. Notably, EBV is found in HRS cells in nearly all cases of cHL occurring in patients infected with HIV (IARC 2012; Younes et al., 2014; Dolcetti et al., 2016).
Table 1. Heterogeneity of classical Hodgkin lymphoma according to the morphologic and virologic characteristics.

NScHL exhibit a better prognosis than that of other subtypes of cHL. 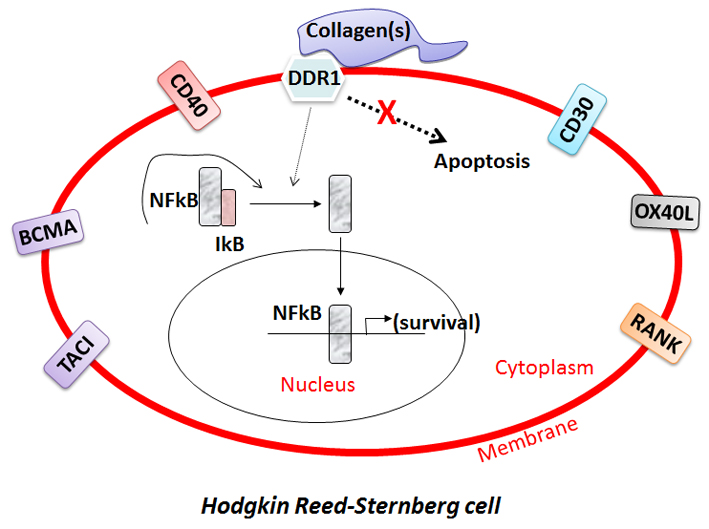 Figure 3. Schematic representation of the interaction of a tumour cell and its cell microenvironment: impact on NFkB signalling pathway. DDR1 pathway is likely to be an alternative or additional pathway to CD40 or CD30 signaling in the pathogenesis of Hodgkin lymphoma.