Review on Subcutaneous panniculitis-like T-cell lymphoma, with data on clinics and the genes possibly involved.

SPTCL represents less than 1% of all non-Hodgkin lymphomas. It affects both children and adults with a median age of onset of 35 years. It is slightly more common in women but no racial or ethnic predisposition has been reported (Kumar, Krenacs et al. 1998; Weenig, Ng et al. 2001; Willemze, Jansen et al. 2008).

Patients with SPTCL typically present with solitary or multiple painless subcutaneous nodules or plaques. The lesions are most commonly located on the lower extremities but the upper extremities and trunk may also be involved. The lesions may be small or measure several centimeters. The nodules may become necrotic but ulceration is rare (Willemze, Jansen et al. 2008; Parveen and Thompson 2009). Systemic symptoms, including fever, fatigue, and weight loss are reported in approximately half of cases while hemophagocytic syndrome is seen in 15-20% of cases (Marzano, Alessi et al. 1997).

SPTCL is characterized by a dense subcutaneous infiltrate of small to medium-sized lymphoid cells. The infiltrate involves the fat lobules, usually with relative sparing of septa. Typically, there is minimal involvement of the overlying epidermis and dermis. The adipocytes characteristically show rimming by neoplastic lymphocytes. Macrophages and vacuolated histiocytes with associated fat necrosis and karyorrhectic debris are commonly present (Parveen and Thompson 2009). Erythrophagocytosis by histiocytes is occasionally seen (Gonzalez, Medeiros et al. 1991; Salhany, Macon et al. 1998; Willemze, Jansen et al. 2008).
By immunohistochemistry, the tumor cells have a mature alpha-beta cytotoxic T-cell phenotype and are characteristically positive for CD3 and CD8 and negative for CD4. The cytotoxic proteins granzyme B, TIA-1, and perforin are usually present (Kumar, Krenacs et al. 1998). Rarely, there is co-expression of CD4 and CD8 while the absence of both CD4 and CD8 should prompt consideration of a γ/δ T-cell lymphoma (Santucci, Pimpinelli et al. 2003; Kong, Dai et al. 2008).
In situ hybridization for Epstein-Barr virus-encoded RNA (EBER) is negative in almost all cases (Salhany, Macon et al. 1998). 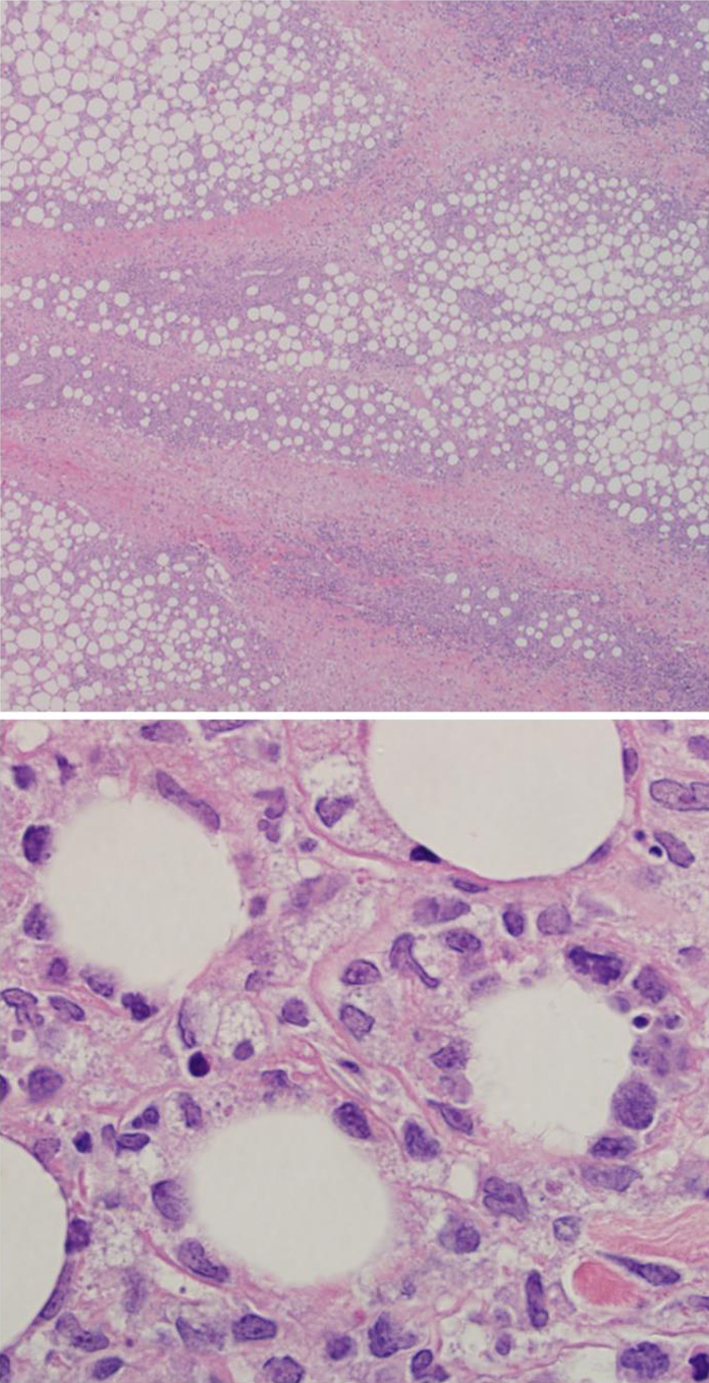 Multi-agent chemotherapy has traditionally been used for the treatment of SPTCL but more recent studies suggest that conservative immunosuppressive agents such as cyclosporine, steroids or chlorambucil may be as effective and should be considered in patients without associated hemophagocytic syndrome (Tsukamoto, Katsunobu et al. 2006). Local radiation therapy has been used effectively in patients presenting with a solitary lesion (Willemze, Jansen et al. 2008). For patients with more aggressive disease, anthracycline-based combination chemotherapeutic regimens with or without stem cell transplantation are frequently used (Go and Wester 2004).

SPTCL generally is a clinically indolent disease with a waxing and waning course. The 5-year disease-specific survival is around 80% (Gonzalez, Medeiros et al. 1991; Salhany, Macon et al. 1998). In most patients the disease remains confined to the subcutaneous tissue, and spread to lymph nodes and internal organs is rare. Patients who develop hemophagocytic syndrome generally have a poor outcome (Aronson, West et al. 1985; Gonzalez, Medeiros et al. 1991). Most previous reports of SPTCL with a rapidly fatal course in the absence of hemophagocytic syndrome are probably attributable to inclusion of γ/δ T-cell lymphomas, which have a much worse prognosis, in the previous classification of SPTCL (Toro, Liewehr et al. 2003).

Relatively few cases have been analyzed by conventional cytogenetics and no consistent abnormalities have been identified.