Ocular adnexal marginal B-cell lymphoma (OAMZL) is the most common type of primary lymphoma of this anatomical site. OAMZL is a rare entity, accounting for 1-2% of all non-Hodgkin lymphomas. A pathogenetic link with chronic infection by Chlamydia psittaci has been demonstrated in some geographical areas. Because of its rarity and the paucity of focused studies the clinical management of OAMZL is still controversial and uniform guidelines are not presently available.

The presence of native lymphoid mucosa associated lymphoid tissue (MALT) in the human orbital region is still controversial. Some authors described this tissue in the lamina propria of the conjunctiva and lacrimal drainage system of healthy individuals (Knop and Knop, 2000). At a variance with this experience, some autoptic studies actually had reported MALT only in the context of pathological conditions, mostly represented by conjunctivitis (Wotherspoon et al., 1994). Following the latter hypothesis and in line with some extranodal marginal zone lymphomasarising in other anatomical sites, a pathogenetic model based on chronic antigenic stimulation and acquired genetic alterations has been speculated for the occurrence of OAMZL.
In particular, infection by Chlamydia psittaci (Cp) has been related to OAMZL, even though with a variable geographical distribution (Decaudin et al., 2008; Ferreri et al., 2008). The association between Cp and OAMZL has been proved by PCR either on tumoral tissue, conjunctival swab and peripheral blood mononuclear cells using three different set of primers targeting distinct portions of the Cp genome and, in selected cases, by laser-assisted microdissection (Ponzoni et al., 2008). Direct demonstration of the microorganism in the cytoplasm of lymphoma-associated macrophages by immunohistochemistry has been validated by double immunofluorescence and electron microscopy besides on ex-vivo cultures (Ferreri et al., 2004; Ferreri et al., 2008; Ferreri et al., 2009). Another important proof of a significant association between Cp and OAMZL is represented by the high rate of clinical responses obtained with anti-Cp antibiotic treatment (Ferreri et al., 2012).
A weak association between some autoimmune diseases and the development of OAMZL has been reported. In particular Sjögren disease and autoimmune thyroiditis showed a higher risk of periocular lymphomas (Wöhrer et al., 2007; Nutting et al., 2006). A recent study on patients with marginal zone lymphomas associated with autoimmune disorders showed a shorter median time to relapse and relapse-free survival in patients with autoimmune diathesis compared to patients without autoimmunity (Kleinstern et al., 2018).

OAMZL is a rare entity accounting for 1-2% of non-Hodgkin lymphomas and 8% of all extranodal lymphomas with an incidence of about 0.28 person for year (Moslehi et al., 2011). This lymphoma is usually observed in the adulthood, with a median age of about 65 years, and a slight female prevalence (Ferry et al., 2007). OAMZL is the most common orbital lymphoma, (80% of primary cases), followed by follicular lymphoma, diffuse large B-cell and mantle cell lymphoma (Ferry et al., 2007).

Clinical presentation depends upon the affected anatomical structure: the most common sites are the superior anterior orbit (40%) and conjunctiva (35-40%), followed by the lacrimal gland (10-15%) and the eyelids (10%). Bilateral involvement accounts in about 10-15% of cases (Ferry et al., 2007; Kalogeropoulos et al., 2018). OAMZL could be asymptomatic in the early phases. When symptomatic, it most commonly presents as an intraorbital mass or less frequently as a conjunctival lesion ("salmon red patch"). Frequent signs/symptoms include pain, irritation and inflammation (sometimes mimicking dacryoadenitis or dacryocystitis), epiphora, exophalmos, diplopia, proptosis and loss of vision (Ferreri et al., 2008). Since these symptoms are not specific, ocular biopsy is essential to achieve a definite diagnosis.
Systemic staging and pre-treatment procedures, including bone marrow biopsy, are perfomed. In addition to usual procedures, complete peripheral blood and biochemical profile as well as investigation for infective agents are necessary among which Cp, Helicobacter pylori and hepatitis viruses (Sassone et al., 2017). Breath test followed by gastric biopsy to test Helicobacter pylori status is also indicated (Sassone et al., 2017). Cp infection has to be assessed in peripheral blood and conjunctival swabs by PCR. Imaging analyses include MRI with enhancement of the orbit and adjacent structures, total-body CT scan or PET/CT.

OAMZL shares the morphological features of other marginal zone lymphomas, characterized by small to medium size lymphocytes with centrocytic-like or monocytoid features and with a variabile evidence of plasma cell differentiation; a minor component of intermingled blasts resembling centroblasts or immunoblasts is recognized. Scattered T-cells and secondary follicles with reactive germinal centres accomplish neoplastic B-cells; follicles can be colonized (sometimes mimicking follicular lymphoma) and/or eventually destroyed by malignant lymphocytes; these cells can specifically infiltrate neighboring epithelia and glands to form lymphoepithelial lesions, defined as aggregates of ≥3 neoplastic B-cells. In OAMZL, lymphoepithelial lesions are detected most frequently in the lacrimal gland.
The classic immunophenotype of OAMZL includes expression of B cell markers such as CD20, CD79a and PAX5, other molecules like bcl-2 and TCL-1, variable expression of CD43, CD11c and IRTA-1. Conversely CD5, CD10, CD23, cyclin D1, bcl-6 and MUM1 are negative, with few exceptions (Swerdlow et al., 2016; Sassone et al., 2017). Staining for CD23, CD21 or CD35 highlights expanded and residual meshwork of follicular dendritic cells. Neoplastic cells usually express IgM and may also show immunoglobulin light-chain restriction. Cytoplasmic Cp-specific lipopolysaccharide can be highlighted in the tumor-associated macrophage cytoplasm by immunohistochemistry (Ferreri et al., 2004, Ponzoni et al., 2008). Plasma cell differentiation may occur and sometimes can be prominent; rarely, plasma cells may express IgG4 (Kubota et al., 2010). Differential diagnosis encompasses non-neoplastic lymphoproliferations, in particular reactive lymphoid hyperplasia and IgG4-related disease. Distinction from reactive hyperplasia relies, in borderline cases, on the demonstration of monotypic immunoglobulin and eventually on molecular studies for clonal rearrangement of the immunoglobulin heavy chain gene (IgH), detectable by PCR in 55% of OAMZL. IgG4-related disease is a systemic disease characterized by elevated serum IgG4 and infiltration of polytypic IgG4 plasma cells associated with reactive lymphoid follicles, phlebitis and fibrosis. Clinico-pathological correlation is critical for the recognition of this rare entity. 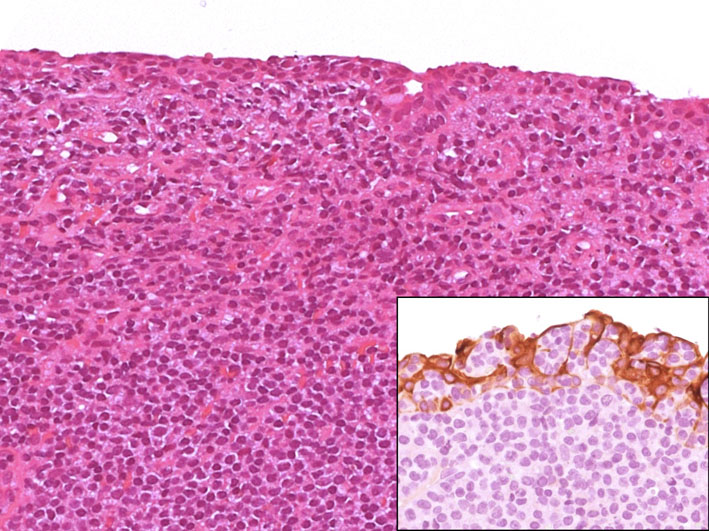 OAMZL of the conjunctiva showing the massive involvement of the lamina propria by neoplastic cells and the infiltration the epithelium above forming typical lymphoepithelial lesions (LELs), more evident with a 8/18 CK staining for epithelial cells (inset). Original magnification H&E x200, inset x400. 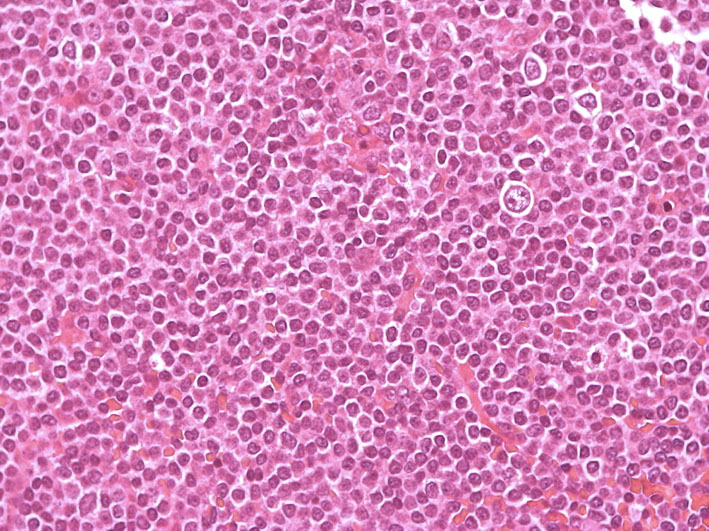 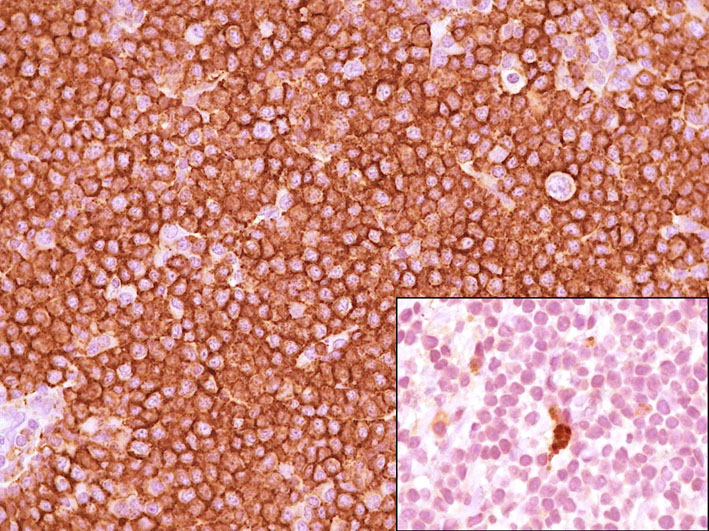 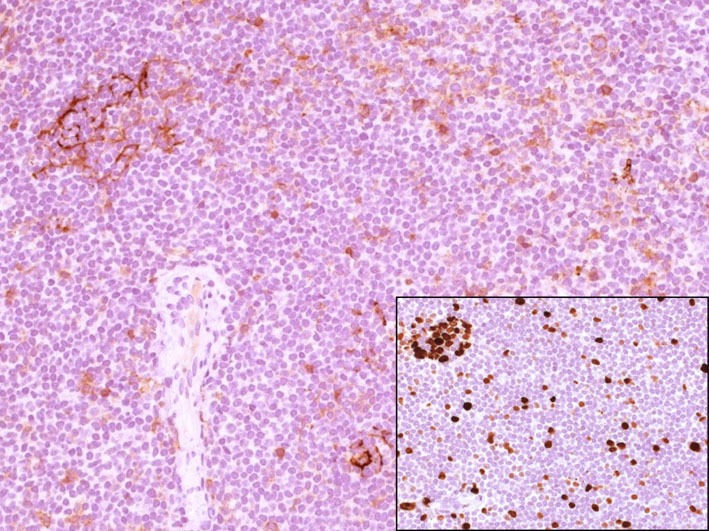 Anti-CD23 staining for follicular dendritic cells highlights the remnant of a germinal centre (top left of the picture); neoplastic cells are CD23 negative. In the inset, the cells show a low proliferative index with a Ki-67 staining. Original magnification x200; inset, x200.

There are no uniform guidelines for the management of OAMZL, therefore treatment strategies remain a matter of debate and linked to many patient- and lymphoma-related variables.A watchful waiting approach, for example, can be useful for asymptomatic elderly patients with limited stage disease.
Radiotherapy, alone or in combination with chemotherapy, is the most common therapy. Reported outcomes are excellent, with local control rates of over 95%, 5 and 10-years DFS rates of 84,65% and 78,7% and OS of 93,8% and 84,9% respectively (Yen et al., 2018). The extension of the radiation fields depends on the involved structures. The International Lymphoma Radiation Oncology Group suggested a radiation dose of 24-25 Gy provided in fractions of 1,5 to 1,8 Gy (Yahalom et al., 2015). However, radiation toxicity effects are distinct and well-known as well: early complications are more frequently represented by cutaneous and conjunctival reactions, while long-term complications are radiation cataract, retinopathy, optic neuropathy and xerophthalmia.
Data on radioimmunotherapy are limited to few, small studies, where OAMZL account for a minority of the studied cases (Sassone et al., 2017).
The use of antibiotics relies on the proven association with Cp infection. First-line doxycycline monotherapy has been demonstrated to be well tolerated in a phase II trial study, with ORR of 65%, 5-year PFS of 61% and no significant side effects (Ferreri et al., 2012). Antibiotics can also be used in Cp negative cases due to its off-target effects. Clarithromycin, in particular, displays an antitumor and immunomodulatory activity: a phase II trial in patients with relapsed/refractory OAMZLs achieved good responses with an ORR of 52% and a 2-year PFS of 56%, respectively (Ferreri et al., 2015).
Chemoimmunotherapy has been proposed as a good alternative to radiotherapy both in localized lesions and in tumors extended beyond the conjunctiva or in bilateral disease (Ma et al., 2017). However, definitive data on efficacy of this strategy are still lacking, since most trials are retrospective or considered a group of indolent lymphomas where OAMZLs account only for a minor part of the cohort: the most frequently drugs tested in this setting are chlorambucil, bendamustin (with or without Rituximab), and purine analogs (Sassone et al., 2017). A recent phase II clinical trial with rituximab, cyclophosphamide, vincristine and prednisone (R-CVP) in patients with bilateral, limited-stage OAMZL extending beyond-conjunctiva demonstrated a durable response and stressed the possibility and efficacy of a radiation-free upfront approach (93,9% CR at 2 years and 90,3% of PFS at 4 years) with severe side effects (neutropenia and hepatotoxicity) in a minority of cases (12% and 6%, respectively) (Kim et al., 2017). Data on immunotherapy alone are few, mainly focused on larger indolent NHL and extra-gastric marginal lymphomas categories: a phase II trial in 18 patients with relapsed/refractory extranodal MZL with Lenalidomide monotherapy obtained an ORR of 61% and manageable side-effects; another study using Bortezomib in patients with newly diagnosed or relapsing/refractory MALT lymphoma showed good efficacy, with an ORR of 80%, but with relevant side effects (Kiesewetter et al., 2013; Troch et al., Hematologica 2009). Finally, the management of the relapsed patients lacks of consensus guidelines as well.

There is no validated prognostic index for OAMZL. Recently, a MALT-IPI score based on the data of the IELSG-19 trail and validated on a group of 633 patients, either with gastric and extra-gastric MALT lymphomas, has been introduced. The score recognizes three distinct features with the greatest prognostic significance in terms of event free survival (EFS): age >70 years old, Ann-Arbor stage III or IV and elevated lactate dehydrogenase level. On these grounds, three prognostic groups with different 5-years EFS rates have been identified: low risk (70%), intermediate risk (56%) and high risk (29%), respectively. The MALT-IPI score has been demonstrated to be a reliable scoring system for identification of patients with aggressive gastric and extra-gastric lymphomas which could benefit of a different therapeutic approach (Thieblemont et al., 2017).

Marginal zone lymphomas share genetic alterations and deregulations of some molecular pathways, but also site-specific genetic profiles have been uncovered in the last years.