Acute lymphoblastic leukemia in Down syndrome

Review on acute lymphoblastic leukemia in Down syndrome, with data on clinics, pathology, and involved genes.

Trisomy 21 has an incidence of approximately 1 in 700 live births. The frequency of acute lymphoblastic leukemia in Down syndrome (ALL-DS) is estimated at 1 in 300 (Lange, 2000). The incidence of ALL-DS

Other than the lack of presentation in children 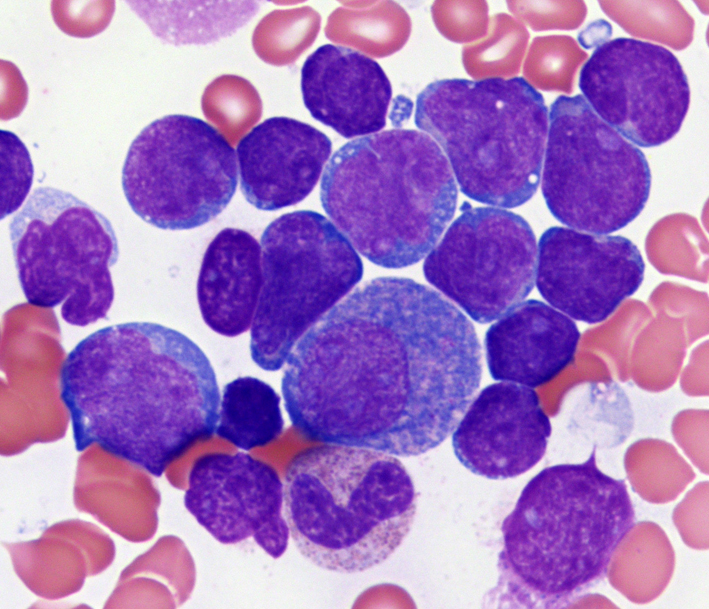 Blasts are characterized as small to medium in size with high nuclear-to-cytoplasmic ratios, round to irregular nuclei, smooth chromatin, and scant deeply basophilic agranular cytoplasm.

The blasts of ALL-DS usually have an immature B cell phenotype, expressing CD19, CD10, and CD79a.

The cytogenetics of ALL-DS differs from the cytogenetics in those with ALL not associated with Down syndrome. The children with ALL-DS have a decreased frequency of favorable cytogenetics including high hyperdiploidy, trisomies of chromosomes 4, 10, and 17, and the t(12;21) translocation compared to children without Down syndrome (Maloney et al., 2010; Bruwier and Chantrain, 2012); these ALL-DS children also have a decreased frequency of unfavorable translocations such as t(9;22) and 11q23 (MLL) rearrangements. Overall, these common B-ALL gene rearrangements, which occur at a rate of approximately 60% in non-Down syndrome patients, only occur at a rate of approximately 20% in ALL-DS. Instead, ALL-DS is more likely to have a normal karyotype (with the exception of the constitutional trisomy 21). In those without normal karyotypes, DS-ALL are more likely to be low hyperdiploid, with common acquired changes including +X and/or del(9p) (Forestier et al., 2008; Lundin et al., 2014).
Approximately 50-60% of ALL-DS have been found to have CRLF2 gene rearrangements by FISH or RT-PCR (Mullighan et al., 2009; Hertzberg et al., 2010). The most common rearrangement is a deletion in the pseudoautosomal region 1 (PAR1) of Xp22.33/Yp11 resulting in a fusion between the first noncoding exon on P2RY8 with the entire coding region of CRLF2 ( del(X)(p22.33p22.33)/del(Y)(p11p11)) (Mullighan et al., 2009). Less commonly, CRLF2 rearrangements with IGH (immunoglobulin heavy chain locus) are identified (t(X;14)(p22;q32)/t(Y;14)(p11;q32)). These fusions result in overexpression of CRLF2. Overexpression of CRFL2 has not been found to be correlated with outcome.

ALL-DS is treated similarly to ALL in those without Down syndrome. However, some additional modifications and supportive care guidelines are often employed in their treatment, including the use of discontinuous dexamethasone during delayed intensification and adding leucovorin rescue after intrathecal methotrexate (Maloney, 2011). Down syndrome patients have increased susceptibility to methotrexate, with higher rates of mucositis, gastrointestinal toxicity, and hepatotoxicity. Some trials have decreased the methotrexate dosage, increasing the dose only if tolerated. Additionally, Down syndrome patient have a higher risk of hyperglycemia after corticosteroids and asparaginase therapy due to alterations in glucose metabolism.

In some studies, children with ALL-DS have been found to have poorer outcomes than children with ALL without Down syndrome, sometimes demonstrating increased induction failures, higher relapse rates, and increased therapy-related mortality. The poorer outcomes are thought to be due, at least in part, to increased sensitivity to methotrexate side effects, and increased susceptibility to infection. The latter susceptibilities are thought to be enhanced by the inherent immunodeficiencies of Down syndrome. However, more recently, with appropriate prognostic group identification based upon favorable and unfavorable cytogenetic features, ALL-DS has been found to have comparable outcomes to ALL not associated with Down syndrome (Maloney et al., 2010; Maloney, 2011). In addition, Buitenkamp et al., 2014 found favorable prognostic factors to include diagnosis < 6 years of age and a WBC

These fusions can be detected by FISH or RT-PCR.

Results in overexpression/dysregulated expression of CRLF2.

Acute lymphoblastic leukemia in Down syndrome