The patient with M2-AML reached a complete remission after chemotherapy (Testoni et al, 1989). The patient with RCMD received treatment with lenalidomide and 6 months later presented with a complete hematological and major cytogenetic response, followed by cytogenetic relapse but with no signs of transformation without therapy 3+ years from the diagnosis (Thorsen et al., 2012). Similarly, the patient with a clinically stable polycythemia vera-like myeloid neoplasm requires only periodic phlebotomies 70 months after diagnosis (McCormick et al., 2014). These data suggests that t(2:11)(p21;q24) may occur in patients with a clinically indolent myeloproliferative disorder.

Because of difficulties to determine terminal 11q chromosome breakpoints and because of the similar cytogenetic appearance of translocations t(2;11)(p21;q24) and the more common t(2;11)(p21;q23) that has been described with or t(2;11)(p21;q23) without MLL ( KMT2A) involvement, FISH is recommended to exclude 11q23/MLL rearrangements.

Gene name
MIR125B1 (microRNA 125b-1)
Location
11q24.1
Dna rna description
Description microRNAs (miRNAs) are short non-coding RNAs of about 19-22 nucleotides in length that play a role in post-transcriptional regulation of gene expression by affecting both the stability and translation of mRNAs. miRNAs have multiple functions including regulation of cellular proliferation, differentiation, and cell death. MIR125B1 has found to play a role in regulation of normal haematopoiesis (Thorsen et al., 2012; McCormick et al., 2014).

The chromosomal translocation t(2;11)(p21;q24) has been described in myeloid neoplasias, suggesting its involvement in deregulation of genes relevant in myeloid cell transformation. t(2;11)(p21;q24) is accompanied by other anomalies, particularly with deletion of the long arm of chromosome 5 that is also characteristic of myeloid malignancies, therefore probably representing a secondary abnormality in these patients. The translocation breakpoint in t(2;11)(p21;q24) had been mapped close to microRNA locus, MIR125B1 at 11q24 that have been suggested to be pathogenetically involved (Bousquet et al., 2010; Thorsen et al., 2012; McCormick et al., 2014). According to these recent reports, this translocation has not been found to lead to gene fusion but is associated with deregulation of MIR125B1, supporting its pathogenetic role in oncogenesis. MIR125B1 is a regulator of normal hematopoiesis and its overexpression has been found to target several genes (STAT3, BAK1, JUN, JUND, and LIN28A) capable of modulating hematopoietic development (Bousquet et al., 2010). Dysregulated MIR125B1 may promote leukaemogenesis by arresting myeloid and monocytic differentiation, promoting stem cell renewal and targeting multiple factors in the TP53 pathway (Bousquet et al., 2010; McCormick et al., 2014). In addition to increased expression of MIR125B1 in patients with a t(2;11)(p21;q24), it is also possible and that disease pathogenesis may be influenced by other concurrent aberrations, such as 5q deletions and JAK2 mutations that may act in a concurrent or synergistic way.
Note also the existence of a t(11;14)(q24;q32) IGH/MIR125B1 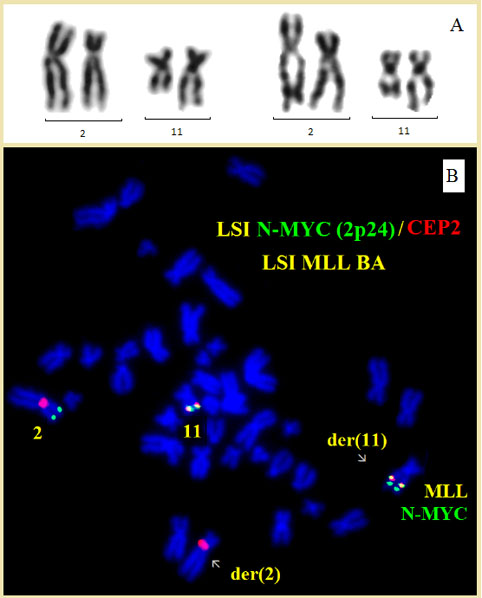 Figure 1. Partial karyotypes showing rearrangement between chromosomes 2 and 11 (A). Fluorescence in situ hybridization with LSI MLL (KMT2A) and LSI MYCN break-apart probes (Abott Molecular/Vysis, US) showing normal MLL signals on chromosome 11 and der(11) and translocation of MYCN located on 2p24 telomeric to MLL gene (B).