Review on myeloid sarcoma, with data on clinics, pathology, and involved genes.

Myeloid sarcoma is defined as a proliferation of myeloblasts effacing tissue architecture and forming a mass in a site other than bone marrow. Originally termed "chloroma" due to the greenish hue appreciated grossly owing to the production of myeloperoxidase, it has also been called granulocytic sarcoma (due to immature to maturing granulocytes, usually consistent with an acute myeloid leukemia with maturation, French-American-British subtype M2), and extramedullary myeloid tumor. In skin, this entity has been referred to as leukemia cutis. However, the most recent and most encompassing term is myeloid sarcoma; while this entity can consist of myeloblasts (with or without maturation), it can also consist of monoblasts or myelomonocytes, and rarely erythroid precursors or megakaryoblasts.

The cells of origin are hematopoietic stem cells/progenitor cells.

The etiology of myeloid sarcoma is similar to that of acute myeloid leukemia, but instead is present in an extramedullary site.

Myeloid sarcoma is thought to occur in four different scenarios: 1) de novo in the absence of any underlying acute myeloid leukemia or other myeloid neoplasm; 2) concurrently with acute myeloid leukemia (sometimes the first sign of disease); 3) representing blast crisis or blast transformation in myeloproliferative disorders or myelodysplastic syndromes; 4) representing relapse AML (often post-transplant). The latter scenario occurs in 5-12% of patients after allogeneic stem cell transplantation, accounting for 7-46% of post-transplant AML relapses (Solh et al., 2016). Approximately 27% of patients present with de novo/isolated disease (Pileri et al., 2007). Some reports have identified myeloid sarcoma in patient with concurrent non-Hodgkins lymphoma or with a history of a non-hematopoietic tumor (Pileri et al., 2007).
Myeloid sarcoma can occur anywhere in the body (except for the bone marrow), but has been found to be most frequent in the skin, lymph nodes, bone, soft tissue, gastrointestinal tract, and mediastinum, with less frequent sites including the testes (Traweek et al., 1993; Pileri et al., 2007; Kawamoto et al., 2016). Multiple sites of involvement may occur in the same individual at the same time. In children, the orbit is an additional common site (Reinhardt and Creutzig, 2002; Dusenbery et al., 2003; Johnston et al., 2012; Støve et al., 2017).
Symptoms of myeloid sarcoma depend on the site of involvement.

As stated previously, the cells can be myeloblasts, differentiating granulocytes (ex. promyelocytes), a mixture of myeloblasts and monoblasts, pure monoblasts, or cells with monocytic differentiation. Rarely myeloid sarcomas consist of erythroblasts or megakaryoblasts. The cells are usually medium to large in size with high nuclear-to-cytoplasmic ratios, fine to vesicular chromatin, variably prominent nucleoli, and scant cytoplasm which may contain granules. Nuclei with irregular or indented contours may represent monocytic cells.

By definition, myeloid sarcoma consists of blasts forming a mass in extramedullary tissue. Depending on the tissue, the cells may be present in confluent sheets, nests, or in cords divided by fibrous septae. In lymph nodes, they can efface the architecture or be present infiltrating the paracortex and sinuses. In the spleen, the neoplasm usually infiltrates the red pulp with persistent white pulp. In some cases, eosinophilic myelocytes and a variety of granulocyte precursors can be seen intermixed with the blasts. The blasts may accumulate around blood vessels and may even invade blood vessel walls. Mitoses may be readily identifiable and tingible body macrophages may be present. Of note, in those cases with isolated myeloid sarcoma, bone marrow blasts may be present at <20% if the sarcoma does not have any defining recurrent genetic abnormality [ t(8;21), t(15;17), or inv(16)/t(16;16)]. Atypical megakaryocytes or micromegakaryocytes may be present in megakaryoblastic myeloid sarcoma.
By morphology, the sarcoma can usually be classified as acute myeloid leukemia with maturation, acute myelomonocytic leukemia, or acute monoblastic/monocytic leukemia. The myeloid sarcomas of the skin are often myelomonocytic or monoblastic/monocytic (Reinhardt and Creutzig, 2002; Pileri et al., 2007). Those in the orbit in pediatrics are often acute myeloid leukemia with maturation. 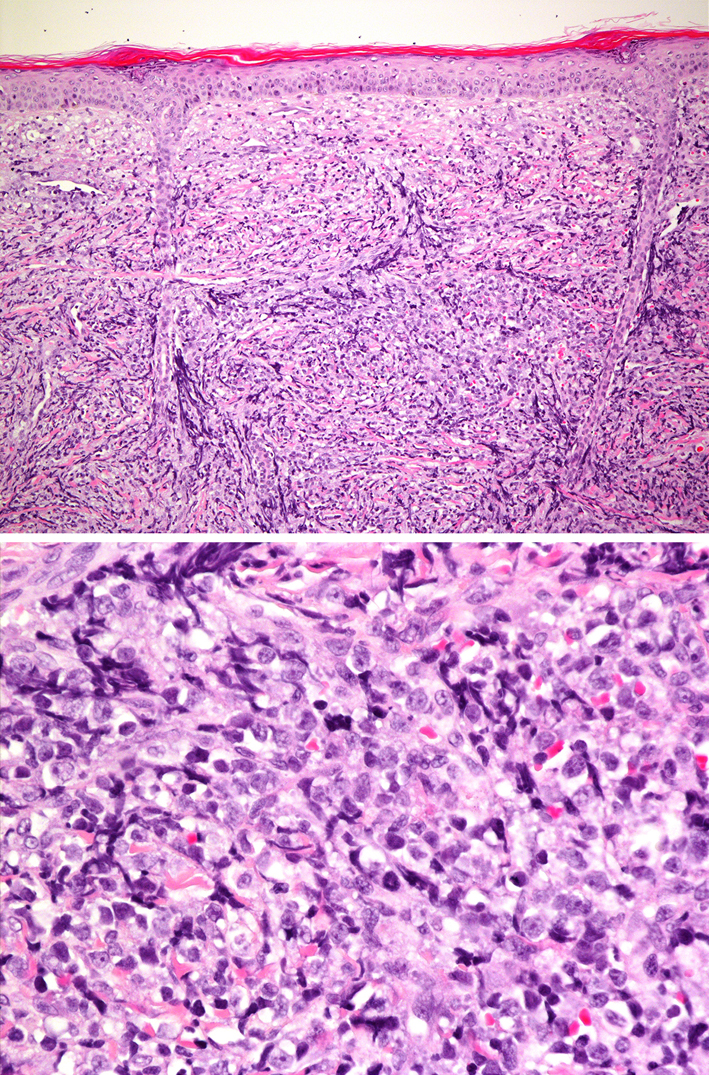 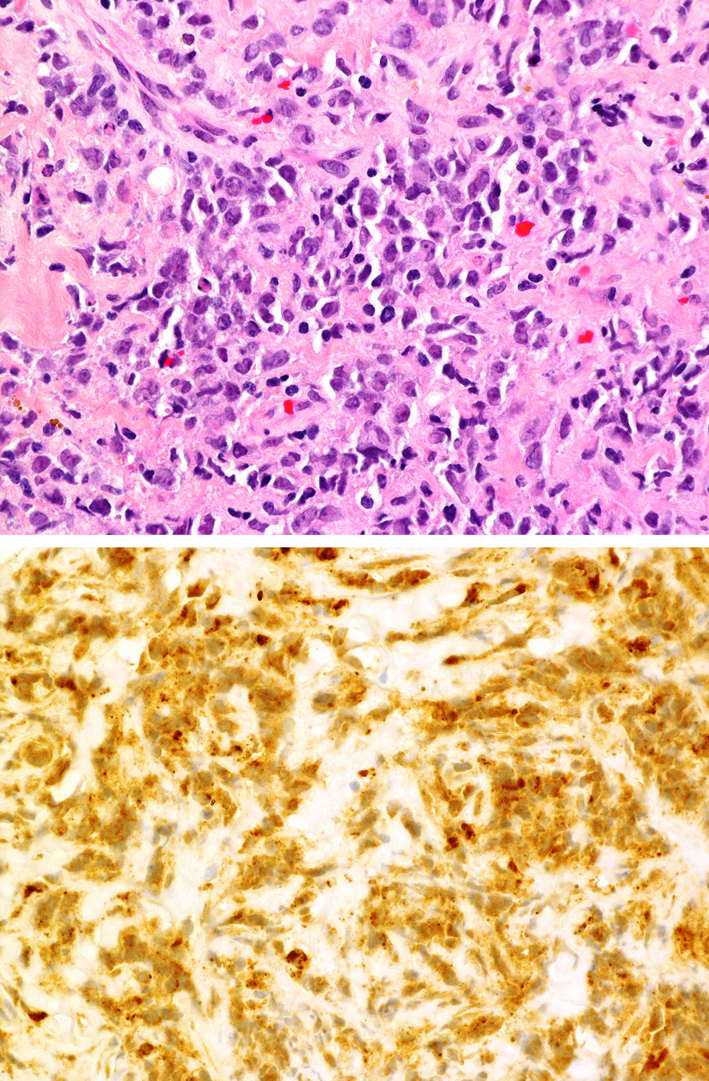 Immunohistochemical stains or flow cytometry are usually necessary for the diagnosis. The antigen expression depends on the type of blasts present. In general, by immunohistochemistry, stains for CD43, CD68, MPO, CD117, and lysozyme are most employed and most often positive (though see below for caveats) (Traweek et al., 1993; Alexiev et al., 2007; Seifert et al., 2014). CD45 is positive in a subset (Traweek et al., 1993). More specifically, myeloblasts would express CD34, CD117, CD43, lysozyme, CD33, and sometimes MPO or CD68-KP1; promyelocytes would express MPO, CD43, lysozyme, and CD15, but lack CD34; monoblasts would express CD43, CD68-PGM1, CD68-KP1, CD163, lysozyme, and CD14, but lack MPO and CD34; monocytes would express CD43, lysozyme, CD68, and CD163. The rarer variants of erythroblasts would express glycophorin A and C, while megakaryoblasts would express CD61, LAT, factor VIII, and von Willebrand factor. (Audouin et al., 2003; Alexiev et al., 2007) Aberrant T cell markers such as CD7 can be present. CD99 may also be expressed. Cytoplasmic and nuclear NPM1 expression is identified in ~15% of cases (representing NPM1 mutations), usually corresponding to those with myelomonocytic or monoblastic morphology, no CD34 expression, and normal karyotype (Falini et al., 2007).
By flow cytometry, the cells would mark as blasts as typical of their lineage.

The treatment for myeloid sarcoma is the same as that for acute myeloid leukemia, which includes induction systemic chemotherapy (Bakst et al., 2011). Cytogenetic and molecular data are important for risk stratification, similar to AML. For those with intermediate or high risk disease, allogeneic transplant may be considered (Solh et al., 2016).
Local radiation has not been found to be beneficial in induction therapy, but has been useful in consolidation if a complete response has not been achieved with chemotherapy. Radiation may also be of use in situations where debulking or rapid symptom relief from compression are needed prior to induction chemotherapy, or when there is recurrence after transplant. Surgery could also be performed if rapid debulking is required. (Bakst et al., 2011)

If isolate myeloid sarcoma is not treated, it will usually evolve into acute myeloid leukemia within 5 to 12 months.