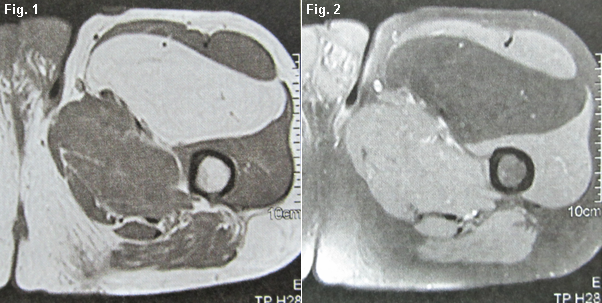 Pathogenesis is unknown. It is not known to develop from benign lipomas; trauma has been implicated. Fusion proteins created by chromosomal abnormalities are key components of mesenchymal cancer development. An abnormality of band 12q13 has been associated with the development of liposarcomas. The most common chromosomal translocation is the FUS-CHOP fusion gene, which encodes a transcription factor necessary for adipocyte differentiation.

Well-differentiated liposarcomas are most commonly found in the extremities and the retroperitoneum, and, less often, in the head and neck area. The tumors usually arise from deep-seated, well-vascularized structures, and rarely from submucosal or subcutaneous fat. Patients usually note a deep seated, slow growing mass in their soft tissue. Only when the tumor is very large do symptoms of pain or functional disturbances occur. Retroperitoneal tumors may present with signs of weight loss and abdominal pain, or mass effect to the kidney or ureter leading to kidney failure.

Imaging
- Radiography: May show a faint soft tissue mass or swelling; areas of calcification or bony erosion may be related to dedifferentiation or higher tumor grade. Chest radiography and computed tomography may be used as screening for pulmonary metastases.
- Sonography: Ultrasonography shows a well-circumscribed uniformly hyperechoic mass.
- Computed tomography: Usually shows a lobulated, well-circumscribed mass with multiple septations and variable contrast enhancement. Computed tomography is superior to MR imaging in detailing cortical bone erosion and tumor mineralization.
- MR imaging: Well-differentiated liposarcomas have well-defined and mostly lobulated margins. The tumors are encapsulated and composed of mainly fat with septa or nodules. Their signal intensity is intermediate between subcutaneous fat and muscle; well-differentiated liposarcomas are hyperintense on T2-weighted images, and they demonstrate faint enhancement or no enhancement after the intravenous administration of contrast material, and linear septations. Diffuse enhancement is usually observed following gadolinium administration. There may be incomplete fat suppression because of the nature and amount of lipids.
- Scintigraphy: An early-phase bone scan may show a marked increase of radioisotopic uptake.

Gross pathology: Well circumscribed, lobulated, soft, greasy to rubbery mass (see figure 5). In the retroperitoneum there may be multiple discontinuous masses. The cut surface varies from yellow to white (and firm) depending on the proportion of adipocytic, fibrous and/or myxoid areas. Areas of fat necrosis are common in larger lesions. Rarely an infiltrative growth pattern may be encountered.

Microscopically: Light microscopy typically shows mature adipocytic cells, atypical stromal cells and limited number of scattered lipoblasts. Four sybtypes have been distinguished:
- Adipocytic or Lipoma-like: the most common form; it is composed of a relatively mature adipocytic proliferation in which, in contrast to benign lipoma, significant variation in cell size, focal adipocytic nuclear atypia and hyperchromasia, and scattered hyperchromatic as well as multinucleate stromal cells are often identified (see figure 3 and 4).
- Sclerosing: the second in frequency, most often seen in retroperitoneal or paratesticular lesions. It is characterized by the presence of scattered bizarre stromal cells, marked nuclear hyperchromasia and rare multivacuolated lipoblasts set in an extensive fibrillary collagenous stroma. Occasionally, the fibrous component may represent the majority of the neoplasm.
- Inflammatory: rare variant, most often seen in the retroperitoneum. A chronic inflammatory infiltrate predominates to the extent that the adipocytic nature of the neoplasm can be obscured.
- Spindle cell: it is composed of a fairly bland neural-like spindle cell proliferation set in a fibrous and/or myxoid stroma, and an atypical lipomatous component which usually includes lipoblasts.

Interpretative difficulties arise when atypical lipomatous tumors contain fibrous or myxoid areas whose cellularity and mitotic rate are higher than in the typical tumors but lower than in the typical dedifferentiated component of dedifferentiated liposarcoma. Many studies pointed out that the cut-off portion of myxoid and fibrous areas with higher mitotic rate and cellularity is uncertain. This portion has been regarded 1 cm (up to 3 cm in large tumors) and considered as a sign of low-grade dedifferentiation from the very beginning.
Similarity to large deep-seated lipomas is also a diagnostic problem. Several authors proposed a positivity in over-expression of MDM2, HMGA2 and CDK4 as a reliable hallmark to distinguish between these two entities, and genetic differences between low and higher grade liposarcomas. Others reported that CDK4 in ALT/WD liposarcomas is expressed inconsistently and is associated with adverse prognosis compared to the MDM2/CDK4 genotype. 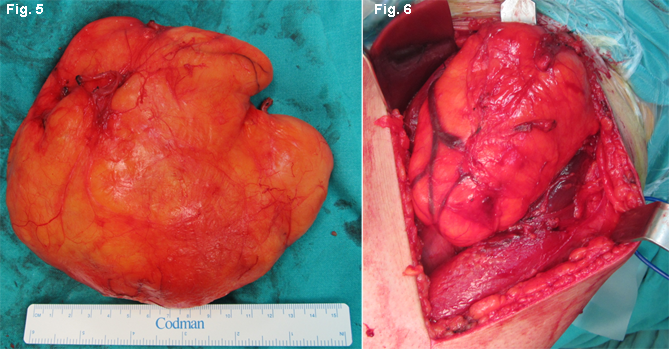 On cytogenetic grounds, approximately 80% of well-differentiated liposarcomas are characterized by the presence of a supernumerary ring and/or long marker chromosomes. The chromosomal region 12q-13-15 is the amplified component within these marker chromosomes.

The 12q-13-15 chromosomal component contains several genes that are amplified or re-arranged in well-differentiated liposarcomas, including the CDK4 (cyclin-dependent kinases) and the MDM2 (murine double minutes) families. Both CDK4 and MDM2 are proto-oncogenes that permit over-ride of the block operated by the G1-S cell cycle checkpoint on cell proliferation. The mdm2 protein is known to inhibit transactivation of p53, a tumor suppressor gene product, which in turn results in cell proliferation.
Recently, immunostaining of cdk4 and mdm2 proteins has been recognized as a valuable method for the differentiation of benign lipoma from well-differentiated liposarcoma. Furthermore, ki-67 expression is associated with progression of soft tissue sarcomas.

Complete, preferably wide-margin surgical resection is the treatment of choice (see figure 6). The rationale for wide surgical excision of atypical lipomatous tumors is the prevention of recurrence and dedifferentiation.
Given the favorable outcome with wide surgical excision alone, regardless of the histologic type of the tumor, some authors believe that adjuvant radiation therapy is unjustified. However, in patients with large high-grade liposarcomas may benefit from multimodality treatment with chemotherapy and radiation. Radiation therapy may be a valuable adjunct to surgery, especially if other than wide margins of resection. The use of chemotherapy in liposarcomas remains experimental. The grade of well-differentiated liposarcomas provides no incremental information over other histological subtypes in terms of response to therapy.

The most important prognostic factor for well-differentiated liposarcoma is anatomical location. Lesions located in surgically amenable soft tissue do not recur following complete excision. In contrast, in retroperitoneum and mediastinum location it is often impossible to obtain a wide surgical excision; well-differentiated liposarcomas in these locations have been associated with adverse prognosis and a higher rate of local recurrence, and dedifferentiation of recurrent tumors. The ultimate risk of dedifferentiation varies according to site and lesional duration and is probably >20% in the retroperitoneum but <2% in the limbs. The rates of 10 to 20-year mortality range from essentially 0% for tumors of the extremities to more than 80% for those occurring in the retroperitoneum.
Patients with a history of previous local recurrence seem to be more prone to further local recurrence; in our experience, all patients referred and treated for recurrence, experienced a 52% rate of local re-recurrence after re-excision, even if with wide margins. Recurrences my occur as late as 140 months after primary surgery. The increased rate of local re-recurrence may reflect that these tumors although low grade have a high local morbidity if not followed at long-term (at least 6 years).