Pathogenesis unclear. Highly malignant vascular tumors of bone (angiosarcomas) may arise at sites of prior radiation.

Epithelioid hemangioendothelioma of bone account for less than 1% of malignant bone tumors. It may occur at any age, although approximately half of the cases tend to occur during the second and third decades of life. Males and females are approximately equally affected. The tumors show a wide skeletal distribution affecting the long tubular bones of the extremity and the axial skeleton, mainly the spine. The lower extremities are predominantly affected, with more than half of the lesions located in the tibia or femur; spinal lesions account for less than 10% of the cases. Approximately one third are multicentric within a bone or multifocal, within multiple bones with lesions randomly distributed throughout the skeleton or clustered in an anatomic region, such as a single extremity. However, the distinction between multifocal and metastatic disease is not clear. In general multifocal disease is thought to be limited to a specific anatomic region (i.e., bones of the same limb) with variable involvement of individual osseous elements. Thus it is debatable whether disease in the femur and cervical spine may be considered multifocal, as opposed to metastatic given that this tumor has capacity of metastasizing hematologically. However, when disease is located in the distal femur or patella, is easier to consider it multifocal.

Clinical symptoms include pain and possible association with a palpable tumor mass. Neurological symptoms may occur in patients with spinal involvement. Tumor growth may be rapid or slow, and infiltrative.

Imaging
The imaging appearance of epithelioid hemangioendothelioma of bone is non-specific. The tumors are purely lytic, poorly marginated with varying degrees of peripheral sclerosis. A soft tissue mass is often associated with less well differentiated tumors. Clustering of multifocal lesions in a single anatomic location suggests the diagnosis of a vascular neoplasm.

Figure A: Sagittal T2-weighted magnetic resonance imaging of the sacrum shows osteolysis and destruction of the coccyx with anterior soft tissue mass. Biopsy showed epithelioid hemangioendothelioma of the coccyx. Figure B: Sagittal T1-weighted magnetic resonance imaging of the thoracic spine of a patient with recurrent epithelioid hemangioendothelioma of the T3 vertebra.

Gross pathology: Macroscopically, epithelioid hemangioendothelioma of bone tends to be firm and tan-white. The tumor can erode the cortex and extend into the soft tissue.
Micropathology: Microscopically, the tumor is composed of anastomosing cords, solid nests, and strands of endothelial cells that may sometimes form narrow vascular channels. The small capillary-sized tumor vessels can mimic small reactive vessels of granulation tissue. The epithelioid cells tend to have eosinophilic cytoplasm which may show vacuolization and sometimes signet ring-like appearance. The connective tissue stroma shows significant myxoid and hyalinized appearance. The nuclei of the neoplastic cells show varying degrees of pleomorphism and anaplasia.
Although many variants of hemangioendothelioma have been reported, the striking features of growth of epithelioid hemangioendothelioma of bone are the formation of atypical endothelial cells (marked nuclear atypia, mitotic activity, spindling of cells and necrosis) arranged in cords, in greater numbers than required to line the vessels with a simple endothelial membrane, and the formation of vascular tubes with a delicate framework of reticulin fibers with a marked tendency for their lumens to anastomose. On hematoxylin and eosin stains the neoplastic epithelioid endothelial cells are embedded in a hyalinized (deep pink) or chondroid-like (light blue) matrix. No tumor should be considered an epithelioid hemangioendothelioma of bone unless these criteria are present.
Immunophenotype: The endothelial cells uniformly express vimentin and many cells stain with antibodies to Factor VIII, CD31, CD34, and Ulex Europaeus. Epithelioid malignancies may also express cytokeratins and EMA.
Ultrastructure: The endothelial cells contain Weibel-Palade bodies, but are generally difficult to find in poorly differentiated tumors. Cytoplasmic filaments are abundant. 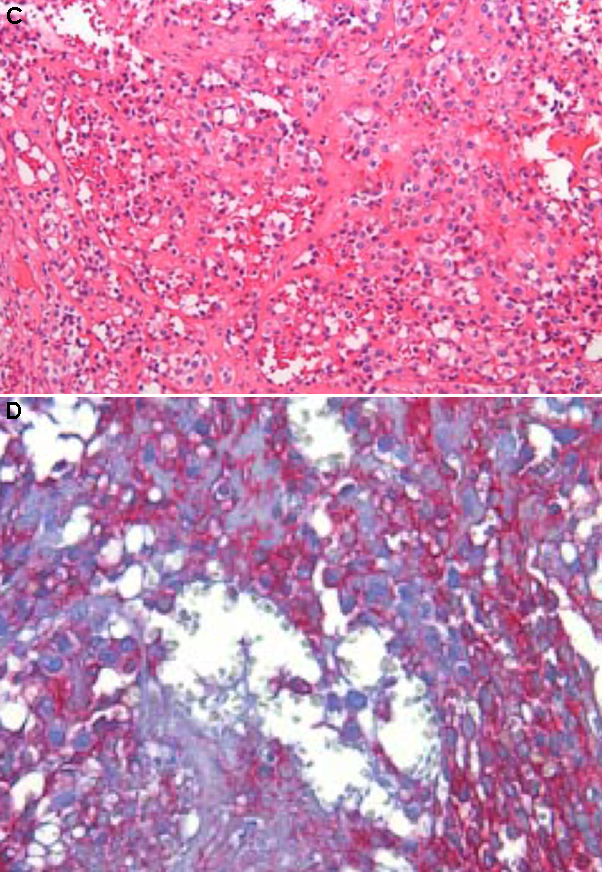 Surgical: Patients with epithelioid hemangioendothelioma of bone may be cured by surgery, with or without other treatments such as chemotherapy, radiation therapy and embolization. A possible major role for wide surgery should be considered for these tumors whenever this choice does not involve high morbidity or poor functional results.
Radiation therapy: Adjuvant radiation therapy is advocated to decrease the risk of local recurrence. The risk for postradiation complications should be considered.
Embolization: As a vascular tumor the potential for intraoperative blood loss is significant. To lessen this complication, patients should have an angiographic evaluation and selective embolization when feasible.

Outcome: The reported local recurrence rate is up to 13%. Wide tumor resection has been related with a lower risk for local recurrence; however, a statistically significantly higher survival to local recurrence has not been shown in multivariate analysis. A median survival of 21 months, a 5-year survival of approximately 33%, and a metastatic rate of up to 31% has been reported. It is difficult to establish correctly which patient had bone metastasis and which patient had progression of the disease in the multifocal form. In the absence of a genetic analysis, patients with unifocal tumors that developed bone lesions after treatment should probably be considered as tumor progression in multifocal form.

The histological degree of differentiation as evaluated pathologically by the histological pattern of the tumor and the cytologic atypia of the neoplastic endothelial cells, and the presence of unifocal or multifocal tumor are the most important prognostic factors. The survival advantage for the patients with multifocal tumors may in part be related to the fact that multifocal tumors show better differentation. Conventionally, multifocal disease in a tumor with atypia would be considered a metastatic deposit, whereas when it occurs in tumors with entirely benign features it is considered a multifocal process. Additionally, tumor location in the axial skeleton and limb girdles probably precludes good prognosis because it is difficult to obtain adequate surgery, or multifocal tumors with poor outcome represent tumors with biologic behavior closer to angiosarcoma.