It is considered to be the most common odontogenic tumor. It is a tumor of the enamel organ without formation of enamel. Robinson has defined it as: Unicentric, nonfunctional, intermittent in growth, anatomically benign and clinically persistent. The importance of this tumor lies in its common occurrence, locally invasive behavior which causes marked deformity and serious debilitation. They also demonstrate increased recurrence rate after surgery. 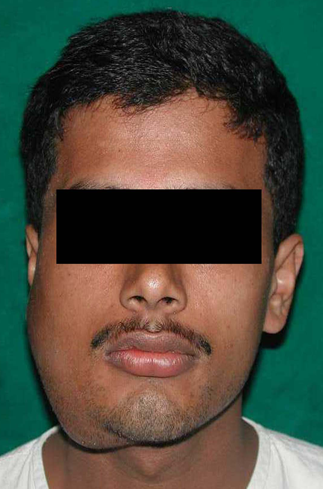 History: Gorlin identifies Cusack as the first person to identify ameloblastoma in 1827. Falkson gave a detailed description in 1879. The first histopathologic description was given by Wedl (1853) who called the tumor cystosarcoma or cystosarcoma adenoids and thought that it could have arisen from tooth bud/dental lamina. Wagstaffe (1871) gave the first histological drawing. Malassez (1885) introduced the term adamantine epithelioma while Derjinsky (1890) introduced the term adamantinoma. However, this term has become obsolete and has to be avoided. Ivy and Churchill in 1930 encouraged the use of the term Ameloblastoma which is the preferred terminology till date.

Ameloblastoma arise from remnants of odontogenic epithelium i.e. from rests of dental lamina. If these rests are situated outside the bone in the soft tissues of gingiva or alveolar mucosa may give rise to peripheral ameloblastoma. Other possible sources of origin include gingival surface epithelium and lining of odontogenic cysts.

Ameloblastoma although rare, is the most common odontogenic tumor accounting for 1% of all tumors in head and neck region and around 11% of all odontogenic tumors. They usually occur in middle age group i.e. 20-40 years with highest incidence noted in 33 years. They are rare in children (8.7% - 15%). Maxillary ameloblastoma and extraosseous ameloblastoma occur in a slightly older age group while unicystic ameloblastoma (Avg 10.8 years) and granular cell ameloblastoma occur in a younger age group. It shows equal sex predilection with no specific racial predominance. There is conflicting evidence on the incidence rates in different races. Although some reports claim an increased incidence of ameloblastoma in black individuals, a large study identifies Asians as the population with greatest number of affected patients.
Ameloblastoma occurs in all areas of jaws, but the mandible is the most commonly affected area i.e. more than 80% of cases are seen here. Within the mandible, the molar angle ramus area is involved three times more commonly than are premolar and anterior regions combined. In the maxilla, most usually occur in the molar area, but may be seen occasionally in the anterior region, maxillary sinus and nasal cavity. Based on the clinical, radiographic, histopathologic and behavioral aspects, four subtypes of ameloblastoma are currently identified namely:
- Classic/solid/multicystic ameloblastoma
- Unicystic ameloblastoma
- Peripheral ameloblastoma
- Desmoplastic ameloblastoma

Ameloblastoma grow slowly and usually are asymptomatic until a swelling is noticed. Most patients thus typically present with a complaint of swelling and facial asymmetry. Occasionally, small tumors may be identified on routine radiography. As the tumor enlarges, it forms a hard swelling and later may cause thinning of the cortical bone resulting in an egg shell crackling which can be elicited. The slow growth also allows for reactive bone formation leading to gross enlargement and distortion of the jaw. If the tumor is neglected, it may perforate the bone and spread into the soft tissues making excision extremely difficult. Pain has been reported as an occasional finding which could be attributed to secondary infection. Other effects include tooth mobility, displacement of teeth, resorption of roots, paraesthesia if the inferior alveolar canal is involved, failure of eruption of teeth and very rarely the ameloblastoma can ulcerate through the mucosa.
Peripheral ameloblastoma usually presents as normal colored, smooth surfaced nodules or enlargements but occasional tumors may present with erythematous or papillary surface. They are slow growing and cause little or no bone erosion. Any saucerisation of the underlying bone is due to pressure rather than invasion.

Radiology: Ameloblastoma usually present as a well defined, multilocular radiolucency with scalloped border typically described as honeycomb or soap bubble appearance. However, unicystic ameloblastoma typically presents as a unilocular radiolucency containing an impacted tooth. They typically infiltrate through the medullary bone, therefore the radiographic margins are not accurate indicators of the extent of involvement. Expansion of buccal and lingual cortical plates, displacement and root resorption may also be seen.
Desmoplastic ameloblastoma present with a ill-defined radiolucent radiopaque lesion reminiscent of a fibro-osseous lesion. 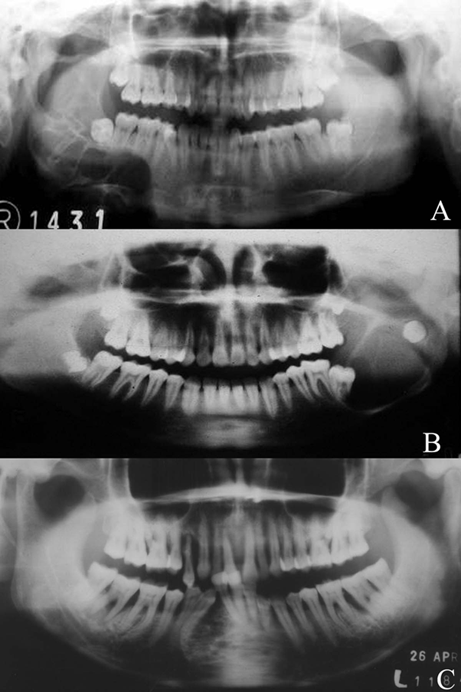 There are six histopathologic subtypes which have been identified for ameloblastoma i.e. follicular, plexiform, acanthomatous, basal cell, unicystic and desmoplastic ameloblastoma. Mixtures of different patterns are commonly observed and the lesions are usually classified based on the predominant pattern present.

Follicular ameloblastoma: These are most readily recognizable and common type of ameloblastoma histologically. The follicular pattern consist of islands of epithelial cells with a central mass of polyhedral cells or loosely arranged angular cells resembling stellate reticulum, surrounded by well organized single layer of cuboidal or tall columnar cells with nuclei placed at the opposite pole of basement membrane resembling pre-ameloblasts. This peripheral cell layer tends to show cytoplasmic vacuolization. Cystic formation is often seen in the center of the epithelial islands due to degeneration of stellate reticulum like cells.
Plexiform ameloblastoma: The tumor epithelium is arranged in form of network/tabeculae which is bound by a layer of cuboidal or columnar cells and stellate reticulum like areas are usually minimal. Cyst formation occurs but is usually due to stromal degeneration rather than cystic change in the epithelium. The stroma consists of loose, vascular sparsely cellular connective tissue.
Acanthomatous ameloblastoma: It resembles a typical follicular ameloblastoma except it shows extensive squamous metaplasia sometimes with keratin formation within the epithelial islands.
Granular cell ameloblastoma: When the central stellate reticulum cells show extensive granular cell transformation i.e. in the form of sheets of large eosinophilic granular cells, the tumors are referred to as granular cell ameloblastoma. Sometimes this change, may be so extensive that the peripheral columnar cells may also be replaced making the diagnosis difficult especially in a small biopsy. Ultrastructurally, it is seen that the granules consist of pleomorphic, osmiophilic, lysosome like organelles.
Basal cell ameloblastoma: This variant shows predominant basaloid pattern consisting of darkly stained cells with minimal cytoplasm and little evidence of palisading at the periphery resembling those seen in basal cell carcinoma.
Desmoplastic ameloblastoma: This variant was first described in detail by Eversole et al. in 1984 and is characterized by extensive stromal collagenization or desmoplasia surrounding compressed small/irregular islands of odontogenic epithelium making it a distinct entity. Cyst formation is common and ameloblast like areas are present only in small foci. Calcification in the fibrous stroma and occasional bone formation can also be seen. Histochemical evaluation of the collagen suggests that the dense stroma is not scar tissue but represents active denovo synthesis of extracellular matrix proteins. It typically presents radiographically as a mixed radiolucency and radiopacity mimicking a fibrosseous lesion. In contrast to typical ameloblastoma, this variant frequents the maxilla and the anterior region of the jaws.
Unicystic ameloblastoma: This is considered as an in-situ or superficially invasive form of ameloblastoma and consists of a single cyst lined by ameloblastic epithelium. It presents clinically similar to a dentigerous cyst and is usually associated with an impacted tooth (usually 3rd molars). They are usually seen in younger patients with an average age of diagnosis being 22 years and generally involve the mandible.
This variant histologically presents as a single cyst lined by ameloblastomatous epithelium and is divided into several subgroups based on pattern and extent of ameloblastomatous proliferation in relation to cyst wall.
Reichart et al. classification modified from Ackermann et al.:
-1. Luminal UA: Cystic lesion lined by epithelium which exhibits columnar differentiation and reverse polarization of the basal cell layer. The connective tissue adjacent to the epithelium often exhibits a uniform, thin band like area of hyalinization.
-1.2. Luminal and intraluminal UA: Is the simple type but exhibits one or more nodules projecting into the lumen. No extension is seen into the surrounding connective tissue wall. Occasionally, this form of UA can produce an intraluminal plexiform pattern of odontogenic epithelium that lacks typical ameloblastomatous differentiation and is called as unicystic plexiform ameloblastoma.
-1.2.3. Luminal, intraluminal and intramural UA: Here there is occurrence of intramural proliferation of ameloblastoma along with subgroup 1.2 features.
-1.3. Luminal and intramural UA: exhibits a cyst with a luminal lining in combination with intramural nodules of SMA tissues. The intramural ameloblastoma tissue may be seen as an infiltration from the cyst lining or as free islands of follicular ameloblastoma.
Peripheral ameloblastoma: They present histologically with follicular or plexiform pattern as well as acanthomatous pattern. In most cases, the tumor is well separated from the overlying epithelium but many are confluent with the overlying mucosa.
Other rare variants: Clear cell variant which may contain clear PAS positive cells are localized in the stellate reticulum like areas.
Papilliferous keratoameloblastoma show occurrence of areas of ameloblastoma with keratinisation, tumor islands with papilliferrous appearance along with cystic areas resembling odontogenic keratocysts.
Mucous cells can also be demonstrated rarely in ameloblastoma.

The diagnosis has to be confirmed by a biopsy, but occasionally in cystic variants it may be made only after excision.
Ameloblastomas, although benign are relentlessly infiltrative. Conventional ameloblastoma infiltrates into surrounding bone and extends beyond the apparent radiographic boundaries seen in plain radiographs. The rate of recurrence reported varies from 20-90%. Treatment planning should take into consideration tumor size, location, histopathology, and clinical/radiographic presentation.
Treatment with curettage is clearly inadequate and may leave small islands of tumor within the bone. Marginal or en bloc resection is the most widely used form of therapy with many surgeons advocating margins of excision to include 1.5 cm of clinically normal bone. Maxillary ameloblastoma are particularly dangerous due to bony architecture and they grow upwards to involve the sinonasal passages, pterygomandibular fossa, orbit, cranium, and brain. Maxillary ameloblastomas thus warrant radical surgery as close proximity to vital structures makes recurrence potentially dangerous in this area.
Reichart et al. reveal that the overall recurrence rate is around 22% and half of them appear 5 years after the initial surgical management. Lifelong follow up is strongly recommended. Rare malignant transformation has also been documented.
For the luminal and intraluminal variants of unicystic ameloblastoma, the tumor is usually confined by the fibrous connective tissue wall of the cyst and isusually treated with complete enucleation. However, in the intramural variants which show invasion into the cyst wall is thought represent a typical ameloblastoma and warrants a more aggressive treatment. Long term follow up however remains mandatory.
Peripheral ameloblastomas are not aggressive clinically and can be managed by local excision. A recurrence rate of 8% has been reported and a further and wider local excision can be curative.