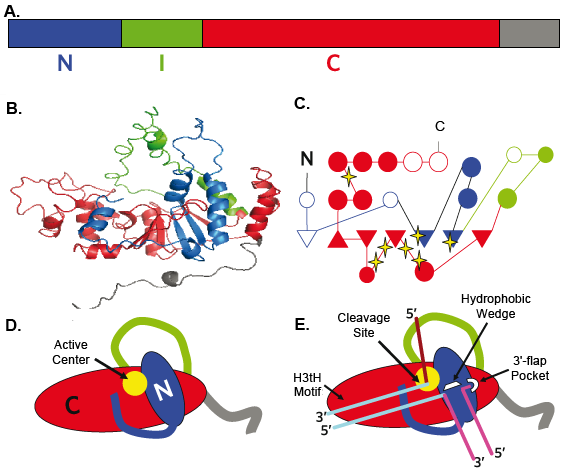 Figure 2. Structure of human FEN1.
A. Schematic of hFEN1 organization as determined by primary sequence analysis (Shen et al., 1998). The protein is divided into the N-terminal (N), Intermediate (I), C-terminal (C), and extended C-terminal regions colored in blue, green, red, and grey, respectively.
B. Structure of hFEN1 (1UL1) colored according to region. Note: electron density for portions of the I-region and the extended C-terminus were not observed (Sakurai et al., 2005).
C. Topology diagram of hFEN1 (Horton, 2008) colored according to region. Filled triangles and circles indicate structural elements that are conserved in all known FEN1s, whereas open circles and triangles indicate structural elements that vary between phage and archaeal/eukaryotic FEN1s. Yellow stars indicate the relative positions of the active site carboxylate residues that bind the requisite divalent metal ions.
D. Two-dimensional schematic of the hFEN1 structure (Grasby J, U. Sheffield, personal communication). Note: the amino terminus of hFEN1 (true for other archaeal and eukaryotic FEN1s as well) is structured and resides near the active site.
E. Schematic illustration of hFEN1 and its interaction with a double-flap substrate. The duplex DNA 3 of the cleavage site is denoted as the downstream duplex (cyan). The upstream duplex dsDNA (magenta) is 5 to the cleavage site. The 5-ssDNA flap (brown) likely interacts with the helical arch formed by the I-region (Chapados et al., 2004; Liu et al., 2006; Devos et al., 2007; Nazarkina et al., 2008).

Human FEN1 is a metallonuclease comprised of 380 amino acid residues (Nazarkina et al., 2008). The protein has a nuclease core domain composed of the N, I, and C regions and an extended C-terminus (Figure 2A) (Shen et al., 1998). The extended C-terminus is dispensable for nuclease activity, but is important for protein-protein interaction with partners like PCNA and WRN (Brosh et al., 2001; Brosh et al., 2002; Zheng et al., 2005; Zheng et al., 2007; Guo et al., 2008; Nazarkina et al., 2008; Karanja and Livingston, 2009) and contains a bipartite nuclear localization signal (Qiu et al., 2001). Structural studies show that the nuclease core domain of FEN1 has a SAM-like or PIN-like fold with a mixed beta-sheet buttressed on both sides by alpha-helical structure and spanned by an arch-like structure (Figure 2B and C) (Horton, 2008). Moreover, the N and C regions form the saddle-like structure of the protein that binds dsDNA and provide the amino acid residues that bind the requisite divalent ions (Figure 2D). hFEN1 binds two divalent metal ions (Sakurai et al., 2005) and is thought to achieve phosphodiesterase activity using a two-metal-ion mechanism (Yang et al., 2006; Syson et al., 2008). The C-region contains an H3tH motif and binds the downstream dsDNA of the substrate (Figure 3E). The N-region interacts with the upstream dsDNA. Notably, a hydrophobic wedge stacks on the terminal base pair of the upstream duplex closest to the active site and a cleft or pocket binds to a 3-extrahelical nucleotide. The N and C regions are interrupted by the I-region, which forms an arch that spans the beta-sheet and the active site residues. The arch likely interacts with the 5-ssDNA flap (Chapados et al., 2004; Liu et al., 2006; Devos et al., 2007; Nazarkina et al., 2008).
Human FEN1 is subject to post-translational modifications, which are thought to regulate hFEN1 activities in vivo (Nazarkina et al., 2008). The extended C-terminal domain can be acetylated in vitro by p300 at four lysine residues (Friedrich-Heineken et al., 2003). A mass spec analysis identified K267 and K375 of hFEN1 as in vivo sites of acetylation (Choudhary et al., 2009). Amino acid residue S187 can be phosphorylated in vitro and in vivo by CDK1-Cyclin A, which regulates the S to G2 transition. S187 phosphorylation has been shown to decrease FEN1 activity in vitro, which is consistent with the role of CDK1-Cyclin A in cell cycle regulation (Henneke et al., 2003). 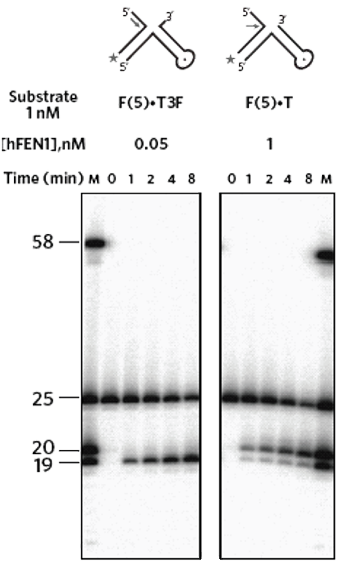 Figure 3. The 3-flap directs cleavage site specificity. Using double- and single-flap synthetic substrates labeled at the 3-terminus (indicated by the gray star), the predominant cleavage site is observed to change from the dsDNA-ssDNA junction (single flap - F(5)•T) to one nucleotide into the downstream duplex (double flap - F(5)•T3F). Single-flap substrates have a secondary cleavage site one nucleotide into the duplex that is equivalent to the cleavage site on the double flap substrate. Note: similar studies with 5-radiolabelling show that a six-nucleotide product is formed with F(5)•T3F, whereas a 5- and 6-nucleotide product are formed with F(5)•T. 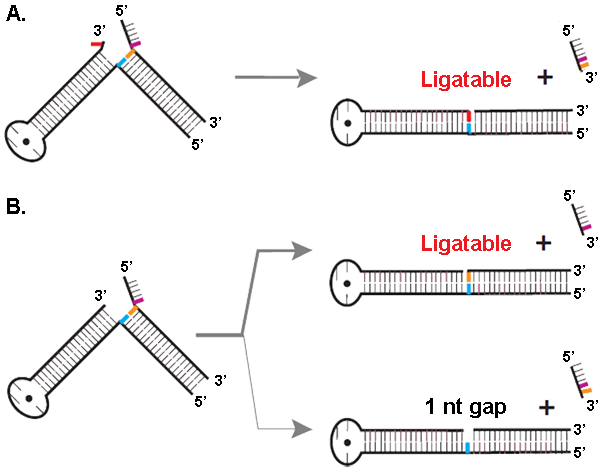 Two FEN1 polymorphisms have been reported to be associated with an increased risk of lung cancer. The first polymorphism is c.69G>A (rs174538:G>A) and resides in the FEN1 promoter region. The second is c.4150G>T (rs4246215:G>T) and resides in the 3-UTR of the transcript (Figure 1). Both polymorphisms are associated with decreased FEN1 expression levels (Yang et al., 2009).
DNA sequencing of DNA from tumors and tumor-derived cell lines has revealed mutations in the FEN1 gene that affect nuclease activity (Zheng et al., 2007). Furthermore, studies have shown that mice from two genetic backgrounds that are homozygous for an active site mutation known to alter enzymatic activity in vitro show an increased incidence of cancer (Zheng et al., 2007; Larsen et al., 2008).