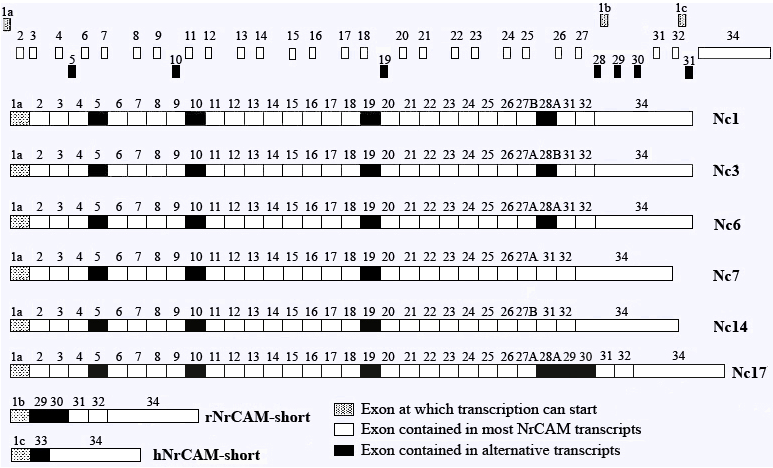 Cartoon of the distribution of NrCAM exons, including those used in most transcripts (open boxes) and those that are alternatively spliced (filled boxes). Most exons are conserved in human, mouse and rat. Exons 1b and 33 have not been identified in humans. The candidate alternatively transcribed exons produce the shorter rat and human isoforms are shown in the bottom two rows. (Rows 3-8) NrCAM clones (Nc)1, 3, 6, 7, 14, 17 that represent splice variant isoforms identified in rat brain cDNAs. (Rows 9-10) Shorter NrCAM gene product expressed isoforms that are identified from ESTs in rat and human databases (from Ishiguro et al., 2006).

The NrCAM gene is about 316 kb in length, consisting of 34 exons.

According to UniProt database there are two known somatic mutations of NrCAM gene, both related to breast cancer (Sjoblom et al., 2006). First mutation results in amino-acids change from medium size and polar His to hydrophobic Pro (H1093P) in the Fn-III 5 domain, and in consequence missing in isoform 3 and 5 NrCAM protein. Second leads to another amino-acids substitution G1116V in the Fn-III 5 domain and effects in missing of 3 and 4 isoforms.

Entity name
Brain tumor
Disease
NrCAM is over-expressed in high-grade astrocytoma, glioma and glioblastoma tumor tissues. High expression of NrCAM was also observed in cell lines derived from tumors mentioned above. Low levels of NrCAM expression were observed in neuroblastoma and meningioma. Northern blot analysis showed an alternatively spliced mRNA of 1.4 kb that could translate into a small variant of the NRCAM protein, which may be tumor-specific. Analysis of DNA from brain tumor cell lines showed that over-expression of NrCAM was not due to gene amplification. The results suggest that NrCAM is over-expressed in malignant brain tumors and can serve as a novel marker for brain tumor detection and perhaps therapy (Sehgal et al., 1998).
Entity name
Colon cancer
Disease
NrCAM expression is induced by beta-catenin and plakoglobin in complex with LEF/TCF through activation the NrCAM promoter where several LEF/TCF binding sites are localized. Excessive activation of beta-catenin signaling is characteristic for colon cancer. Significant expression of NrCAM was demonstrated in the human colon cancer cell lines, and more importantly in colon carcinoma tissue samples but not in normal colon. The results indicate that NrCAM, as a target gene of the beta-catenin-TCF/LEF-1 pathway, may play a key role in the colon cancer tumorigenesis, probably by promoting cell growth and motility (Conacci-Sorrell at al., 2002).
Entity name
Melanoma
Disease
Melanoma cell lines from advanced stages of human melanoma, which express high levels of NrCAM, stimulate cell growth, enhance motility, induce transformation, and produce rapidly growing tumors in nude mice, while those lacking NrCAM do not. NrCAM was found in complex with alpha4 integrin and beta1 integrin in melanoma cells, indicating that it can mediate heterophilic adhesion with extracellular matrix receptors. Suppression of NrCAM levels by small interfering RNA (siRNA) inhibits the adhesive and tumorigenic capacities of these cells, and implies that NrCAM expression is necessary for these cellular processes in melanoma cells. (Conacci-Sorrell et al., 2002 and 2005).
Entity name
Pancreatic carcinoma
Disease
NrCAM is expressed by nonneuronal elements of human pancreas and is dysregulated in various stages of pancreatic cancer. In normal tissue, NrCAM is expressed predominantly on the surface of acinal cells, and very weekly on normal ducts. In most poorly differentiated tumors as well as human pancreatic adenocarcinoma cell lines decreased or no expression of the protein is seen, whereas the well and moderately differentiated carcinomas show elevated expression. The data indicate expression of NrCAM in normal pancreas and loss in pancreatic adenocarcinoma. Taken together, this differential tissue- and cell-specific regulation of NrCAM expression suggests that this molecule may be involved in the pathogenesis and invasive/metastatic behavior of pancreatic cancers (Dhodapkar et al., 2001).
Entity name
Papillary thyroid carcinoma
Disease
NrCAM is over-expressed in papillary thyroid carcinoma (PTC) on both gene and protein levels. The upregulation of NrCAM gene is not related to the primary tumor stage (TNM) and size (Gorka et al., 2007). NrCAM gene over-expression in papillary thyroid carcinoma was also shown by DNA microarrays study (Jarzab et al., 2005; Delys et al., 2007). Moreover, artificially raised expression of RET/PTC1) in normal human thyrocytes, directly induces many inflammatory and tumor invasion genes including the NrCAM (Borello et al., 2005). NrCAM induction and over-expression in PTC cells regardless of the primary tumor stage suggests that this is an early event during PTC development.
Entity name
Autism
Disease
Results from various genomic screens provide evidence for an autism susceptibility region on chromosome 7q31, which contains NRCAM gene.
According to Hutcheson et al. (2004) none of the individual polymorphisms in or surrounding NRCAM demonstrated evidence for allelic association to autism. The distinct results have been reported by Bonora et al. in 2005. Screening for mutations in unrelated individuals with autism led to identification of polymorphisms in the promoter and untranslated region of NRCAM. Results suggest that alterations in expression of NRCAM gene may be linked to autism susceptibility, and association was more significant when considering the haplotype transmission (Bonora et al., 2005).