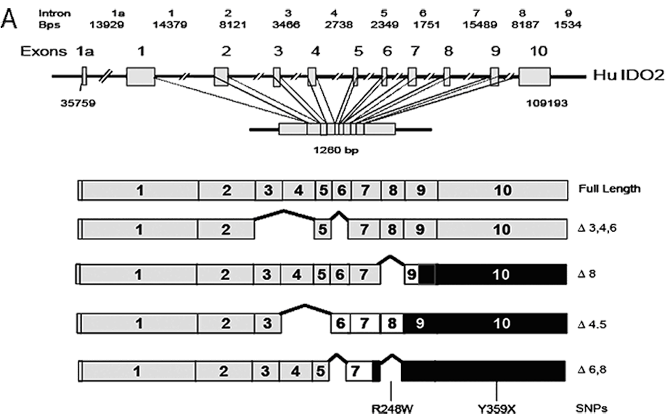 The human IDO2 gene is encoded by 10 exons spanning 81,437 bps at chromosome 8p11.21 (nucleotides 39,911,631-39,993,067). The murine IDO2 gene is similarly sized but localized to a syntenic locus on mouse chromosome 8A2. The IDO1 and IDO2 genes are present tandemly in a tail-to-head arrangment on chromosome 8 in humans and mice. In lower vertebrates such as zebrafish and toads only a single IDO gene may be present that may be more IDO2-like in structure. This closer relationship to IDO2 suggests that IDO2 may actually be the ancestor of the better characterized IDO1 gene, and that IDO1 might have been generated by gene duplication of IDO2 before the origin of tetrapods in mammalian evolutionary history. Two single nucleotide polymorphisms (SNPs) that occur commonly in the coding region human IDO2 gene have been characterized. These SNPs are discussed further below in the Protein Function section.

Transcription of IDO2 gene produces multiple mRNA messages of which the first characterized was 1,260 bp in length. At least two transcripts are expressed with alternate 5 exons, suggesting that the IDO2 gene may have multiple promoter regions. Exon 1A of the IDO2 genes contain the start codon for a full-length protein; the transcript(s) containing exon 1B do not have an in-frame start codon at a similar position. On the other hand, transcripts containing exon 1B have a more widespread expression pattern than those containing exon 1A that encode full-length proteins. Start codons in exon 3 exist that have a Kozak consensus sequence that are conserved in an alignment of all vertebrate IDO proteins, thus, these codons may potentially be used to generate NH2 terminally-truncated IDO2 proteins. The IDO2 gene encodes least 4 alternatively spliced transcripts that lack various patterns of exons (exons 3, 4, 5, 6, and 8) from within the full-length coding sequence. The IDO2 promoter contains a prominent binding site for IRF7, a master regulator of dendritic cell differentiation. 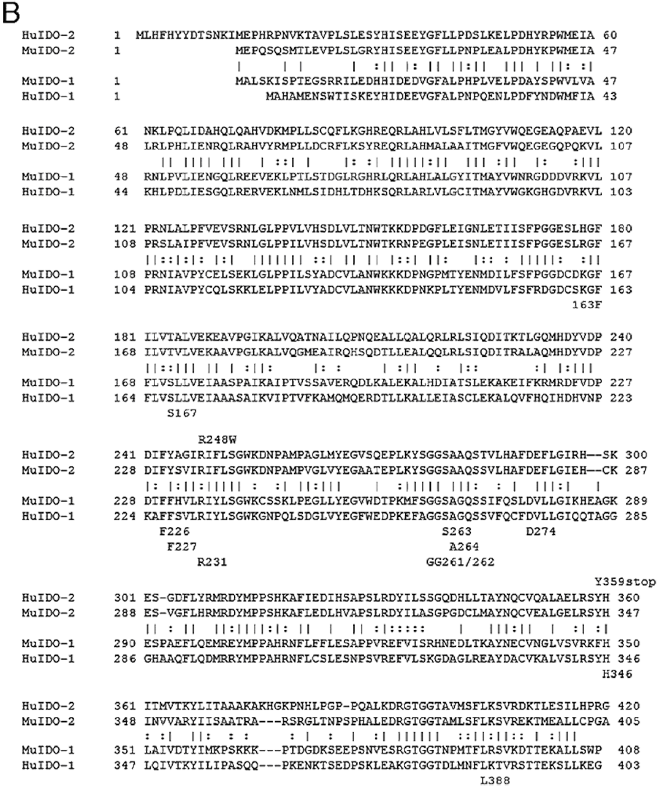 B: Amino acid alignment of IDO and IDO2. Amino acids determined by mutagenesis and the crystal structure of IDO that are critical for catalytic activity are positioned below the human IDO sequence. Two commonly occurring SNPs identified in the coding region of human IDO2 are shown above the sequence which alter a critical amino acid (R248W) or introduce a premature termination codon (Y359stop).

Full-length IDO2 encodes a protein of 420 amino acids with an approximately calculated molecular weight of 45 kDa. The size of this IDO2 protein is slightly larger than full-length IDO1 protein.

IDO2 is a presumptive immunomodulatory gene based on its close structural relationship to IDO1 and its expression in a variety of antigen-presenting cell types. Both IDO1 and IDO2 will catabolize tryptophan to kynurenine. Biochemical studies indicate that both enzymes are similarly robust in catabolic activity, although the in vitro conditions required for IDO2 to manifest the same level of activity differ somewhat from IDO1. However, whether IDO2 is active as a tryptophan catabolizing enzyme in human dendritic cells has been disputed. Further work is needed to conclusively determine that IDO1 and IDO2 are similar in their preference for substrates and reaction pathways to generate product.
A non-redundant function for IDO2 relative to IDO1 is suggested by their rather distinct expression patterns and response to extracellular stimuli. For example, IDO1 is strongly induced by interferon-gamma (IFNG) but it is less clear this is the case for IDO2. Additionally, whereas IDO1 is induced in endothelial cells during malaria infection in mice, IDO2 is induced in kidney, downregulated in liver, and unlike IDO1 independent of the presence IFN-g. Both IDO and IDO2 catabolize tryptophan, trigger phosphorylation of the translation initiating factor eIF2a, and mobilize translation of LIP, an inhibitory form of the immune regulatory transcription factor NF-IL6/CEBPb that is upregulated by amino acid deprivation. However, whereas tryptophan restoration switches off the LIP induction pathway when it is activated by IDO1, LIP induction is not switched off when it is activated by IDO2. Together, this information suggests that IDO1 and IDO2 produce somewhat distinct signaling pathways, suggesting distinct functions in immunomodulation.
Two single nucleotide polymorphisms (SNP) that produce non-conservative changes in the coding region have been characterized that abolish catalytic activity. One SNP is a C-T transition that causes the amino acid change R248W. Based on knowledge of the related IDO protein, the R248W change is predicted to abolish a critical contact in the catalytic site that contacts the indole ring of tryptophan, the presumptive substrate. Experimental data confirm that this SNP abolishes tryptophan catabolic activity. The other SNP is a T-A transversion that produces the premature stop codon Y359STOP. Experimental data confirm that this SNP also abolishes tryptophan catabolic activity. The R248W alteration is highly represented in individuals of European descent. The Y359STOP alteration is highly represented in individuals of Asian descent. Neither SNP is as prevalent in individuals of African descent. Individuals with one of these inactivating alleles might display alterned immune function relative to individuals with a wild-type allelic configuration.
In biochemical assays, IDO2 exhibits preferences distinct from IDO1 for inhibition by the well-studied IDO inhibitor 1-methyl-D,L-tryptophan (1MT). Specifically, the levo stereoisoform L-1MT preferentially inhibits IDO1 activity whereas the dextro stereoisoform D-1MT preferentially inhibits IDO2. Interestingly, in preclinical models D-1MT has been observed to exhibit greater antitumor activity compared to L-1MT, prompting the hypothesis that IDO2 may contribute to tumoral immune escape like IDO1. However, since IDO is genetically required for the activity of D-1MT the biochemical mechanisms underlying 1MT action are likely to be complex. Nevertheless, results of in vitro biochemical experiments suggest that L-1MT preferentially blocks IDO1, with little effect on IDO2, whereas D-1MT preferentially the IDO2, with little effect on IDO1.

Entity name
Cancer
Note
While limited information exists as yet, two lines of information have suggested a possible link between IDO2 and cancer. First, recent work has identified IDO2 expression in human tumors, including gastric, colon, renal, and pancreatic tumors. Immunohistochemical analysis performed in pancreatic tumors reveals IDO2 expression both at the level of the tumor cell as well as immune cells in tumor-draining lymph nodes. However, IDO2 expression and tryptophan catabolizing activity in human tumor cells and antigen-presenting cells has been disputed. Second, the apparent selectivity of IDO2 for inhibition by the D stereoisomer of 1MT, which tends to be more active in a variety of biological assays for IDO function, including in antitumor assays, suggests that IDO2 may be important to sustain immune escape and growth of tumors. Knockout mice that have become available recently will be important for establishing the these suggested roles for IDO2 in cancer.