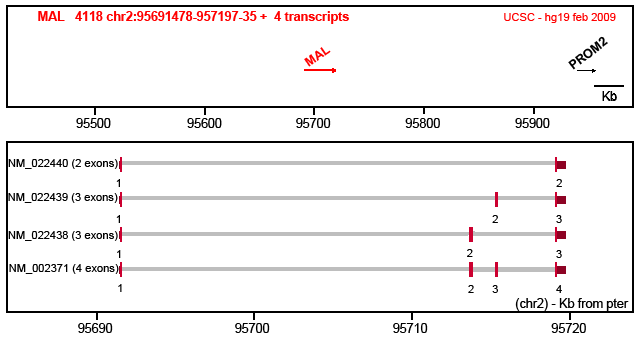 Amplification of cDNA from different T-cell samples by PCR revealed that there are four different splicing variants of mRNA named as MAL-a (462 bp), MAL-b (333 bp), MAL-c (294 bp), and MAL-d (168 bp). These variants defined according to involvement of exon2 and/or exon3, while MAL-a includes all 4 exons. As the three introns were located between complete codons, the reading frame was maintained in all the transcripts. (Figure adapted from Atlas of Genetics and Cytogenetics in Oncology and Haematology).

Genomic DNA of MAL gene is located on chromosome 2q11.1 spans 21 kb and includes 4 exons interrupted by three introns.
The promoter lacks a consensus TATA box in the vicinity of transcription start side and there is no consensus polyadenylation signal, although ATAAAA sequence exists.
There are two separated promoter CpG islands at a totally 1500 bp length of region extending into the first intron and contains up to 116 CpG dinucleotides. CpG island is divided into two regions and usually methylation status of these regions are evaluated separately by specifically designed primer sets.
MAL promoter at 110 bp upstream of the transcriptional start site contains also several SP1 binding sites, which may be regulated by transcriptional activator SP1 (Tugores et al., 1997).

MAL coding sequence: bases 60-518, accession NM_002371.2.
The mRNA is 1051 bp and open reading frame is 460 bp in length. Translation begins from a start codon in exon 1, ends at a stop codon in exon 4, and results in a 153 amino acid protein product. mRNA orientation is forward and transcription occurs on plus strand. The first exon encodes the 5 untranslated region and the first 31 amino acids. The second and the third exons encode 56 and 42 amino acids, respectively. Fourth exon encodes the 24 amino acids at COOH-terminal and the 3 untranslated region. The intron boundaries follow the AG/GT rule of acceptor/donor splice signal sequences and splicing between exons occurs between the last nucleotide of a codon and the first one of the next codon (Rancano et al., 1994b).

There is no identified pseudogene.

MAL belongs to the MAL family of proteolipids including BENE, MAL2 and Plasmolipin. In mouse, the conserved motif of (Q/Y-G-W-V-M-F/Y-V), which is located at the junction of the first extracellular loop and the second membrane-associated domain serves as a fingerprint for the MAL family, although overall amino acid sequence identities between mouse MAL and the related proteins are between 29-37% (Magyar et al., 1997). This motif is also shared in human MAL family.
Molecular mass of the MAL protein is 16700 Da and assigned into proteolipid group based on the solubility feature in lipophilic solvents. MAL is a non-glycosylated integral membrane protein including four transmembrane domains as hydrophobic segments. Each of four exons encodes a hydrophobic membrane-associated segment and its adjacent hydrophilic sequence in the protein structure (Rancano et al., 1994a). A model is proposed about orientation of MAL protein in the membrane (Alonso et al., 1987).
Another feature of MAL is its transmembrane helices constituting the MARVEL (MAL and related proteins for vesicle trafficking and membrane link) domain. This domain is also found approximately in 20 open reading frames of human genome (Sanchez-Pulido et al., 2002). Furthermore, the domain is also found in the tight-junction-associated proteins including occluding, tricellulin, marvelD3 and in the synaptic-membrane-localized synaptophysin and synaptogyrin. Thus, a common characteristic of proteins containing the MARVEL domain is localization to specialized domains within surface membranes (Magal et al., 2009).

Alonso and Weissman originally identified MAL expression in intermediate and late stages of T-lymphocyte differentiation (Alonso and Weissman, 1987). Furthermore, expression of MAL mRNA is also found to be related with differentiation in urothelial cells, neuronal cells (Liebert et al., 1997; Wakeman et al., 1997) and esophageal epithelium (Mimori et al., 2007). Accordingly, expression is prominent in upper layers, while it is weak or absent in basal layers of esophageal epithelium (Marazuela et al., 2003). These results implied a strong relation between differentiation status and MAL expression.
Although four transcripts identified, MAL-a variant containing the all four exons is found to be the most abundantly expressed in several tissues including peripheral blood lymphocytes and HNSCC tissues (Rancano et al., 1994b; Beder et al., 2009).

The MAL proteolipid is an integral membrane protein and generally embedded in the plasma membrane of epithelial cells (Magal et al., 2009). Expression is generally more pronounced in supranuclear - apical membrane domain for most of the polarized epithelia including gastrointestinal mucosa and thyroid follicular cells (Marazuela et al., 2003) according with its role in polarized sorting.
The protein has been mainly identified as an internal component of glycolipid-enriched membrane (GEM) domains in T-lymphocytes (Millan et al., 1997), in polarized epithelial MDCK cells (Zacchetti et al., 1995) and in myelin-forming cells (Kim et al., 1995). As intracellular placement, the protein is localized to endoplasmic reticulum of T-lymphocytes (Rancano et al., 1994b).

Plasma membrane (PM) of epithelial cells divided into apical membrane domain involved in exchange with the organ lumen, and the basolateral domain maintaining contact with neighboring cells and the underlying extracellular matrix. Localizing numerous PM proteins to apical and basolateral domains by direct or indirect pathways result in cell polarization. In the direct pathway, proteins delivered directly from the trans-golgi network (TGN) to the apical PM by raft-dependent or non-raft carriers. Rafts are clustering of glycospingolipids, sphingomyelin and cholesterol into membrane microdomains and therefore also named as GEM (glycosphingolipid- and cholestrol-enriched membrane) domains. These detergent insoluble membranes defined by resistancy to cold extraction with Triton X-100. Several proteins participate in structure of rafts.
MAL is an integral membrane component of raft domains and recycles between the Golgi complex and the apical membrane in MDCK cells (Puertollano et al., 1999a). Although, exact mechanism of MAL function in raft-dependent apical sorting is unknown, MAL family proteolipids are implicated to be potent regulator of apical transport by involving in the assembly and targeting of apical transport platforms and in the formation and stabilization of raft domains. Consensus sorting motifs in the C-terminus function in regulation of raft transport (Puertollano et al., 1997).
In apical sorting, PM proteins are clustered into either glycolipid raft domains or non-raft carriers. MAL and MAL2 together with FAPP2 take part in constitutive apical transport of Influenza hemagglutinin (HA) (Puertollano et al., 1999b) and GPI-anchored proteins (decay-accelerating F factor, folate receptor, GFP-GPI, 5-nucleotidase, CEA) by lipid-raft-associated mechanism (Weisz et al., 2009). Based on apical sorting of many proteins, MAL is implied to function in establishment of cell polarity, however, MAL knockout mice did not display a clear defect in neuronal and epithelial cell polarity (Harada, 2010).
Related with the location of MAL in membrane microdomains another role is also suggested in cell signaling (Alonso et al., 2001), although there is yet no clear evidence concerning this function.

MAL protein is shown to be widely conserved (94-97%) across species by sequence alignment. In MAL family of human, MAL displays 39% and 36% amino acid sequence identity with BENE and MAL2, respectively and all proteins have four-transmembrane domain structure.

Direct sequencing of the entire coding region revealed no somatic mutations in 20 cases of cervical cancers (Hatta et al., 2004) and in 24 head and neck cancer cell line series (Beder et al., 2009).
Currently, there is no further data in HGMD database.