Oocyte expressed protein, alias OOEP, is a component of the subcortical maternal complex (SCMC) that play its roles in oocytes and in early stages of embryogenesis. In this review it is done an insight on its DNA, its RNA, its protein encoded and on the diseases where OOEP is involved. 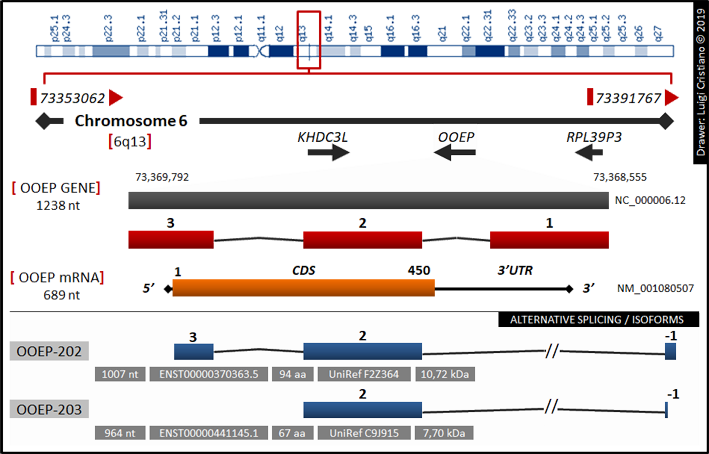 Figure. 1. OOEP gene, transcript and splicing variants/isoforms. The figure shows the locus on chromosome 6 of the OOEP gene, its transcript and its alternative splicing/isoforms (blue). The primary transcript is OOEP-201 mRNA (orange), but also EEF1G-202/203 variants seem be able to codify a protein (reworked from https://www.ncbi.nlm.nih.gov/gene/1937; http://grch37.ensembl.org; www.genecards.org)

OOEP, alias oocyte expressed protein, is a protein coding gene that starts at 73,368,555 nt and ends at 73,369,792nnt from qter and with a length of 1238 bp. The current reference sequence is NC_000006.12 and contain 3 exons. It is proximal to KHDC3L (KH domain containing 3 like, subcortical maternal complex member) gene and to RPL39P3 (ribosomal protein L39 pseudogene 3) gene. Around the genomic locus of OOEP take place different promoter or enhancer transcriptional elements. Two strong elements are closer to the sequence of OOEP gene and are located at +0.3 kb and at -27.3 kb respectively.

For OOEP are known some pseudogenes that are classified as processed pseudogenes and are listed in Table 1. 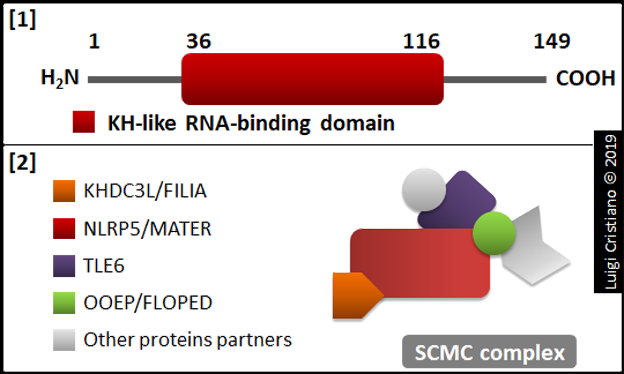 The canonical sequence for OOEP protein (RefSeq NP_001073976) counts 149 amino acids and has a molecular weight of 17.17 kDa and a theoretical pI of 6.59. Contains a KH-domain, a typical domain of the type I superfamily of RNA binding proteins (Herr et al., 2008), that could mediate RNA transcript regulation during the oogenesis and early embryogenesis stages.
There are known other two isoforms produced by alternative splicing: the isoform OOEP-202 (UniRef, F2Z364) is formed by 94 residues and has a molecular weight of 10.72 kDa, while the isoform OOEP-203 (UniRef, C9J915) counts 67 amino acids and has 7.70 kDa of molecular weight.

OOEP, as the others factors of the subcortical maternal complex (SCMC), is uniquely expressed in mammalian oocytes and in early embryo (Bebbere et al., 2016). However, some authors found mouse OOEP transcripts also in ovary and thymus, although the protein could not be detected. This may suggest that the transcript remains untranslated (Herr et al., 2008) and perhaps plays a regulatory function. The human OOEP mRNA was found in pituitary gland (Herr et al., 2008; Carninci and Hayashizaki, 1999), placenta (https://www.ncbi.nlm.nih.gov/gene) and testis, where it was overexpressed (https://www.gtexportal.org/home/gene/ENSG00000203907; https://genevisible.com/ tissues/HS/UniProt/A6NGQ2). It was also found in traces in ovary, endometrium, prostate, salivary gland, adrenal, appendix, brain, digestive system and related organs (esophagus, stomach, duodenum, small intestine, colon, gall bladder, liver, pancreas), lung, fat cells, heart, spleen, thyroid and urinary bladder (from https://www.ncbi. nlm.nih.gov/gene).

OOEP is located in the cytoplasm.

OOEP is a component of the subcortical maternal complex (SCMC) that includes at least other three proteins, i.e. KHDC3L (also known as KH domain containing protein 3, FILIA), NLRP5 (also called Maternal Antigen That Embryo Requires, MATER) and TLE6 (also known as Transducin-Like Enhancer of Split 6). These proteins are expressed by maternal effect genes (MEGs) exclusively in oocytes and early embryos and are physically bound together in the SCMC complex. Also only a mutation on one of them, such as TLE6, induces instability of the complex and may be a cause of human female infertility and earliest human embryonic lethality (Bebbere et al., 2016; Alazami et al., 2015; Zhu et al., 2015; Bebbere et al., 2014).
OOEP plays an essential role for zygote progression beyond the first embryonic cell divisions (Bebbere et al., 2014) and it is hypotized that it could play a role in the formation/stabilization of the oocyte cytoskeleton, called oocyte cytoplasmic lattices (CPLs) and also it could be involved in the organization and regulation of the translational machinery through the interaction between SCMC complex with other protein and/or protein complexes (Bebbere et al., 2016; Tashiro et al., 2010). In addition, OOEP could be involved in RNA degradation during oocyte maturation and in the early stages of embryogenesis (Wang et al., 2012) and it could be directly or indirectly involved in the binding of the mRNAs and in their correct subcellular localization (Bebbere et al., 2016). In mouse oocytes was found that OOEP may participate in the regulation of genome stability (He et al., 2018), but it is not confirmed in humans yet.

OOEP is highly and abundant conserved in many species and its homology between the species is reported in Table.2

The genomic alterations observed include the formation of novel fusion genes as EEF1G/OOEP (acute lymphoblastic leukemia/lymphoblastic lymphoma), EXOC2/OOEP (bladder transitional cell carcinoma), FAM19A2/OOEP (breast adenocarcinoma), KHDC1/OOEP, OOEP/ EIF3A, RERE/OOEP (prostate adenocarcinoma) and SENP6/OOEP (prostate adenocarcinoma) (http://atlasgeneticsoncology.org// Bands/6q13.html), however there are no experimental data yet to understand the impact on cellular behaviour and so the implications in cancer of these fusion genes.

Top note
OOEP is a maternal-effect gene that is expressed in zygote and in early stages of embryo development. It is linked with female infertility, however there is some evidence of its involvement in cancers. We review the diseases in which OOEP gene showed overexpression, upregulation or aberrant fusion with other genes. Anyhow some authors found a downregulation of OOEP in ovarian cancer patient samples (Veskimäe et al., 2018), in colon cancer (Penrose et al., 2019) and in prostate cancer cells (Lu et al., 2015).
Entity name
t(6;11)(q13;q12) EEF1G/OOEP
Disease
Acute lymphoblastic leukemia/lymphoblastic lymphoma (Atak et al, 2013)
Hybrid gene
T-cell acute lymphoblastic leukemia (T-ALL) affects about 15% of pediatric patients and 25% of adult patients of total ALL cases. It is an agressive tumor characterized by the accumulation of multiple genomic mutations and chromosomal aberrations, such as frequently chromosomal translocations, that bring to the formation of many in-frame fusion genes encoding the respective chimeric and oncogenic proteins (Atak et al., 2013). Among all these chromosomal aberrations it was found also the fusion gene 5 EEF1G / 3 OOEP deriving by the genomic translocation and fusion of a part of OOEP gene, situated on chromosome 6, with a portion of EEF1G gene, located on chromosome 11. This leads to the know but not still well-characterized translocation t(6;11)(q13;q12) EEF1G/OOEP.
Entity name
Human female infertility/ early embryo lethality
Disease
Aberrant expression of SCMC members, such as OOEP, could compromise the fertility in women but also could be linked to abnormalities in preimplantation embryo development and in early lethality of the human embryos and so cover a significant role both in female inability to get pregnant and in failure of the development of implanted embryo after in vitro reproductive assistance procedures (Bebbere et al., 2016; Alazami et al., 2015; Zhu et al., 2015; Zhang et al., 2008).
To effort these considerations, an experiment in mouse demonstrated that a lack of OOEP gene (OOEP -/- knockout mice) causes complete infertility and disorganization/abnormalities in oocyte cytoplasmic lattices (CPLs). However, Ooep-null mice females grew to adulthood and showed no apparent abnormalities except the infertility (Tashiro et al., 2010).
Entity name
Osteosarcoma
Note
Some authors found OOEP gene upregulated in osteosarcoma cells (Li et al., 2017).
Entity name
Small cell lung carcinoma
Note
The expression of OOEP is increased in small cell lung carcinoma (Jiang et al., 2016).
Entity name
Testis cancer
Note
Some databases reported that the expression of OOEP is increased in testis cancer (https://www.proteinatlas.org/ENSG00000203907-OOEP/pathology; https://genevisible.com/cancers/ HS/UniProt/A6NGQ2) but is not clear if also protein can be displayed.
Entity name
Thyroid cancer
Note
One database reported high levels for the presence of OOEP protein in thyroid cancer although its expression level in this cancer type was reported to be lower (https://www.proteinatlas.org/ ENSG00000203907-OOEP/pathology).