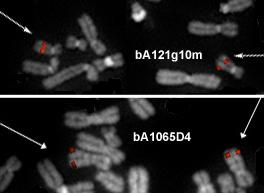 Review on BRAF, with data on DNA, on the protein encoded, and where the gene is implicated.

The real sequence A31 G32 A33 was erroneously considered R31 P32. As the A33 was missing in previous sequences, some articles have erroneously assigned wrong numbers to coding mutations and amino acids (i.e. V599E mutation instead of V600E).

Figure 1. Diagram of the BRAF protein in scale. Numbers inside the blue boxes indicate the exon from which is translated each part of the protein. The three boxes inside represent the conserved regions of the protein with the ARAF and RAF1 genes (CR1, CR2 and CR3). With green bars are represented three different domains: RBD (Ras binding domain), CRD (Cysteine-rich domain) and KD (Kinase domain). A conserved glycine motif (G-loop) in exon 11 is indicated with a red bar and the activation segment (AS) in exon 15 with a pink bar. The black arrows indicate the major phosphorylation sites of the protein. C: Carboxyl-terminal; N: Amino-terminal.

Amino acids: 766. Molecular Weight: 84437 Daltons. The BRAF gene is a proto-oncogene that belongs to the Serine/Threonine Kinase Family. It is also a member of the RAF Subfamily together with the ARAF and RAF1 genes.

BRAF is expressed in most tissues. Protein expression using antibody staining is not mainly consistent with RNA expression.

BRAF is a serine/threonine kinase that belongs to the RAS/RAF/MEK/ERK/MAPK pathway, which is involved in the transduction of mitogenic signals from the cell membrane to the nucleus. BRAF in its inactive form has region CR1 autoinhibiting region CR3 that contains the Kinase Domain, preventing BRAF kinase abilities. The activated form of BRAF is triggered by Ras proteins. RAS is inactive when bound to GDP, but when it binds to GTP becomes active and promotes phosphorylation and activation of BRAF and the pathway signal. This step is mediated by the Ras Binding Domain (RBD) in CR1 of BRAF, which is released ceasing the kinase inhibition. Several downstream genes have been found to be activated by this pathway, among them, CCND1 (cyclin D1), CCND2 ( cyclin D2) and CCND3 (cyclin D3) (self-sufficiency in growth), VEGF (angiogenesis), MYC (insensitivity to antigrowth signals), ITGB3 (b3-integrin )(tissue invasion and metastasis) and MDM2 (apoptosis evasion, limitless replicative potential and angiogenesis).

BRAF shares three conserved regions (CR1, CR2 and CR3) with the other two RAF genes: ARAF and RAF1 (Figure 1). CR1, which has 131 aa, contains the cysteine-rich domain (CRD) and most of the Ras binding domain (RBD). These two domains bind to RAS-GTP. CR2, which has 16 aa, is rich in serine and threonine residues, including S365 as an inhibitory phosphorylation site. Finally CR3, which has 293 aa and has the kinase domain, contains also the G-loop GXGXXG motif (highly conserved in most of the human kinases), the activation segment and the regulatory phosphorylation sites S446, S447, D448, D449, T599 and S602. The other two RAF genes do not show pathogenic mutations for unclear reasons.

BRAF contains several single nucleotide polymorphisms, both synonymous and non-synonymous. It is unclear whether any of them may impact BRAF function. 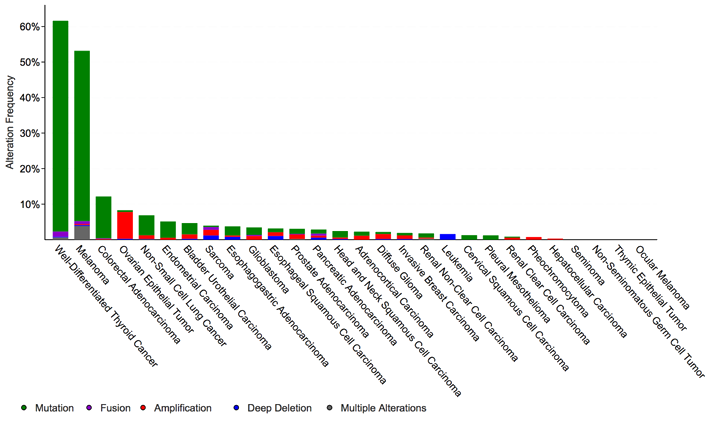 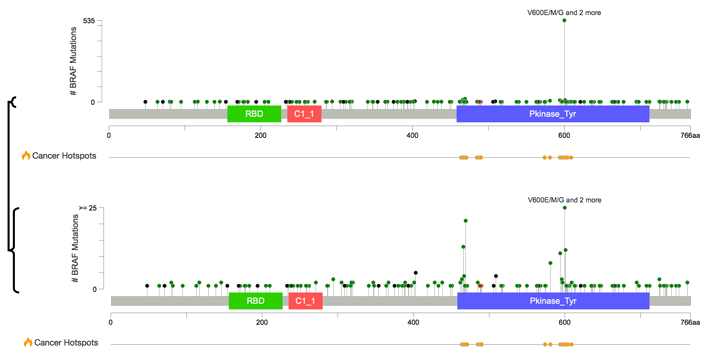 Figure 4. Mutations in BRAF, KRAS, NRAS and HRAS genes do not overlap (taken from cbioportal).

BRAF presents somatic mutations in different sort of tumours like thyroid cancer, malignant melanoma, sporadic colorectal tumors showing mismatch repair defects in microsatellites (MSI) and low-grade ovarian serous carcinoma (Figure 2). A majority of these mutations correspond to the hotspot transversion mutation T1799A that causes the amino acidic substitution V600E, which is the most common single nucleotide change in cancer (Figure 3a). The other atypical ones account for a wide variable range of missense mutations residing in the glycines of the G-loop in exon 11 or in the activation segment in exon 15 near the V600 residue (Figure 3b). The mutation V600E confers transformant activity to the cells because it mimics the phosphorylation of T599 and/or S602 in the activation segment so BRAF rests constitutively active in a RAS independent manner.
BRAF mutations can be classified into 3 subtypes depending on their effect on BRAF activity. Class 1 mutations function as an active monomer and are Ras-independent as they do not require any upstream signaling from Ras. Mutations in codon 600 like the main hotspot are examples of Class 1 mutations. Class 2 mutations are also Ras-independent but they act as dimers (eg K601E, K601N, K601T, L597Q, L597V, G469A, G469V, G469R, G464V). Class 3 are mutations that inactivate the kinase domain but strikingly result in higher MAPK signalling. This is because these are Ras-dependent mutations that also provide higher affinity to both Ras and RAF1 (CRAF), resulting in increased downstream signalling. Examples of Class 3 mutations are D287H, V459L, G466V, G466E, G466A, S467L, G469E, N581S, N581I, D594N, D594G, D594A, D594H, F595L, G596D.
Mutations in the Ras genes HRAS, KRAS or NRAS are not concomitant with BRAF mutations (Figure 4), strongly suggesting same pathway activation. The exception are Class 3 BRAF mutations, probably because they benefit from upstream pathway overactivation by Ras mutations.
BRAF-V600E is not present in other tumours like high-grade ovarian serous carcinoma, gastric cancer, esophageal cancer, endometrial cancer, uveal melanoma, biliary tract cancer or hepatocellular carcinoma.. Gene fusions retaining an intact kinase domain of BRAF have been found in different tumour types at frequencies below 3%.

BRAF has some CpG sites from upstream the transcription start site to the first exon but no methylation has ever been described.