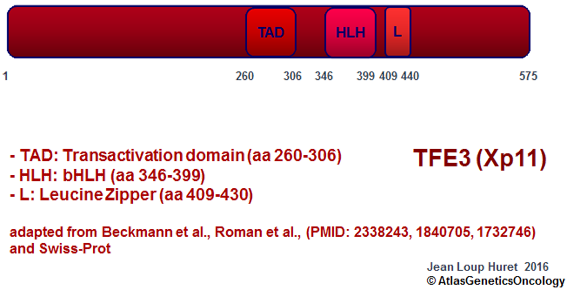 wide; in fetal and adult tissues

transcription factor; member of the basic helix-loop-helix family (b-HLH) of transcription factors primarily found to bind to the immunoglobulin enchancer muE3 motif, Ig K enhancers and Ig H variable regions promotors; the helix-loop-helix - leucine zipper region is implicated in DNA binding and dimerization (homo and heterodimerizations); mice which lack TFE3 in their B and T lymphocytes reconstitute the B- and T-cell compartments, but IgM levels are reduced

Entity name
t(X;1)(p11.2;q21.2) in renal cell carcinoma --> PRCC/TTFE3
Prognosis
overall 5-yr survival rate around 85%
Hybrid gene
5 PRCC- 3 TFE3; variable breakpoint in PRCC; breakpoint in the 1st intron of TFE3
Fusion protein
N-term PRCC with the proline rich sequence fused to most of TFE3, including the acidic transcriptional activation domain, the helix-loop-helix, and the leucine zipper; the reciprocal TFE3-PRCC is expressed; it is to be noted that the normal TFE3 transcript is lost in female patients

Fusion protein
N-term PSF and most of it fused to the DNA binding domains of TFE3 (excluding the acidic transcriptional activation domain, including the C-term helix-loop-helix, and the leucine zipper); no TFE3-PSF reciprocal transcript, as the der(X) t(X;1) is missing; the normal TFE3 transcript is found
Entity name
inv(X)(p11.2q12) in renal cell carcinoma --> NONO/TFE3
Disease
only one case of papillary renal cell carcinoma
Hybrid gene
5 NONO- 3 TFE3

Fusion protein
N-term NONO and most of it except the C-term proline rich sequence fused to the DNA binding domains of TFE3 (excluding the acidic transcriptional activation domain, including the C-term helix-loop-helix, and the leucine zipper); the reciprocal transcript is found
Entity name
Alveolar soft part sarcoma with ASPSCR1 -TFE3 fusion
Cytogenetics
der(X)t(X;17)(p11;q25) is consistently involved; it implicates: 1- the formation of a hybrid gene at the breakpoint, and also, 2- gain in Xp11-pter sequences, and loss of heterozygocity in 11q25-qter, with possible implications
Hybrid gene
5 ASPSCR1-3 TFE3; the reciprocal 5 TFE3 - 3 ASPSCR1 is most often absent. ASPSCR1 is fused in frame to TFE3 exon 3 or 4
Fusion protein
NH2 term ASPSCR1, fused to the C term of TFE3
Oncogenesis
might combine the effect of a fusion protein to that of gene(s) dosage
Entity name
primary renal ASPSCR1-TFE3 tumour
Disease
a subset of renal cell carcinoma, which presents with a combination of alveolar soft part sarcoma-like features and epithelial features is found to carry this anomaly
Cytogenetics
balanced t(X;17)(p11.2;q25), in contrast with what is found in the alveolar soft part sarcoma (see above)
Hybrid gene
5 ASPSCR1-3 TFE3
Fusion protein
NH2 term ASPSCR1, fused to the C term of TFE3
Entity name
other Xp11 involvements in renal cell carcinoma (t(X;10)(p11;q23), etc ...) are likely to implicate TFE3 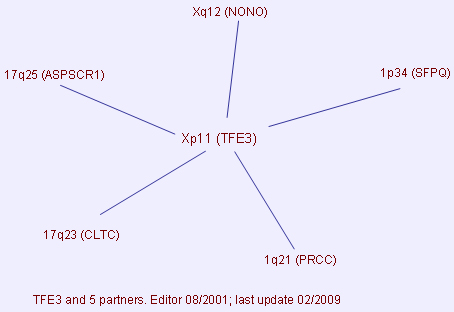