Very rare, only one case described.

Imatinib mesylate after 14 years from diagnosis.

Molecular remission after one year of treatment. 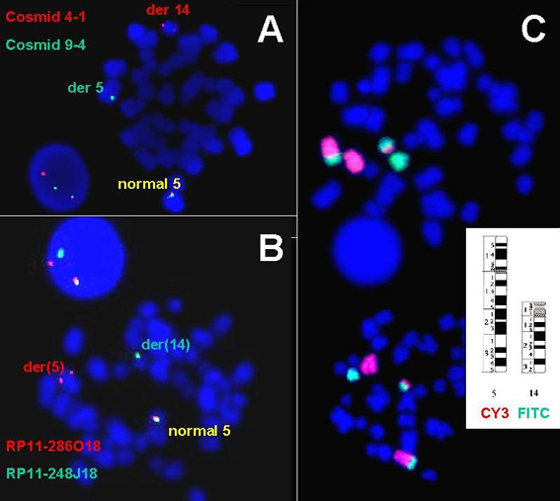 Gene name
NIN ninein (GSK3B interacting protein)
Location
14q22.1
Note
This gene is involved only in this translocation.
Dna rna description
31 exons spanning 111.3 Kb on 14q22.1. Transcription is from telomere to centromere. 4-5 alternative transcripts.
Protein description
Homooligomer. Interacts with GSK3B (GSK3-beta) via its C-terminus domain, ait also interacts with C14ORF166 preventing its phosphorylation by GSK3-beta. NIN is a component of the core centrosome. Arranged in a tubular conformation with an open and a closed end within the centrosome. In the mother centrosome, it localizes at both ends of the centrosome tube, including the site of centrosome duplication, while in the daughter centrosome it is present only at the closed end. Requires PCM1 for centrosome localization. In interphase cells, it is localized in the centrosome. Decreases in metaphase and anaphase and reappears in telophase. Its expression is ubiquitous and is high in heart and skeletal muscle.
Gene name
PDGFRB (platelet-derived growth factor receptor, beta polypeptide)
Location
5q32
Dna rna description
23 exons spanning 42 Kb on 5q32. Transcription is from telomere to centromere. 1 transcript with 5.6 Kb.
Protein description
This gene encodes a cell surface tyrosine kinase receptor for members of the platelet-derived growth factor family. These growth factors are mitogens for cells of mesenchymal origin. The identity of the growth factor bound to a receptor monomer determines whether the functional receptor is a homodimer or a heterodimer, composed of both platelet-derived growth factor receptor alpha and beta polypeptides. This gene is flanked on chromosome 5 by the genes for granulocyte-macrophage colony-stimulating factor ( GM-CSF ) and macrophage-colony stimulating factor receptor; all three genes may be implicated in the 5q- syndrome. Several rare translocations between this gene and other partners result in chronic eosinophilic leukemia, atypical CML or chronic myelomonocitic leukemia with eosinophilia. Only one case with a t(5;14)(q31;p12) and CEV14-PDGFRB fusion has been found as a secondary event in a patient with relapsed acute myeloid leukemia.

Schematic representation of the fusion NIN-PDGFRB consequence of the t(5;14)(q33;q24) in a chronic myeloproliferative disorder with eosinophilia. From up to down: PDGFRB, NIN and the putative chimeric NIN-PDGFRB structure. TM, transmembrane domain; TK, tyrosine kinase domain; LZ, leuzine-zipper domain. Coiled coil domains on NIN and NIN-PDGFRB are indicated with asterisks.

The fusion gene is predicted to encode a NIN-PDGFRB protein of 300 kDA (2595 aminoacids) retaining most of NIN protein (2047 of the wild-type 2116 aminoacids) and most of the intracellular domain of PDGFRB (548 aminoacids), including the entire tyrosine kinase domain. This fusion involves PDGFRB exon 12, whereas all other reported PDGFRB fusions involve exon 11. Consequently, NIN-PDGFRB lacks the PDGFRB transmembrane domain. From ninein, the fusion would retain the potential GTP-binding site, a large coiled-coil domain, four leucine-zipper domains and a GSK-3B binding site.

NIN shares features in common with other tyrosine kinase fusion partners, namely widespread expression and the presence of putative oligomerization domains. Although there is no direct experimental proof, it is likely that the NIN promoter drives expression of the chimeric gene in hemopoietic progenitor cells, and the oligomerization domain(s) result in ligand-independent activation of the PDGFRB kinase moiety by mimicking the normal process of ligand-induced receptor dimerization.