Proposed definitions of extranodal lymphoma vary, according to purpose, from lymphomas restricted to a single extranodal site and its regional lymph nodes to lymphomas which may be more widespread but in which an extranodal organ is the presenting and predominant site of disease, to which therapy may be primarily aimed. Extranodal lymphomas are different from those of lymph nodes, representing approximately 25-50% of all non-Hodgkin lymphomas (only 2-5% of classical Hodgkin lymphomas present at extranodal sites) (dAmore,et al.2008.). Most lymphomas are from the gastrointestinal (GI) tract, followed by skin, Waldeyers ring, central nervous system, salivary glands, orbit, lung, bone, sinonasal tract, thyroid gland, testes, breast and other sites. (dAmore,et al.2008; Heckendorn, et al. 2015. Siddiqui, et al. 2009.) Both the lymphoma subtype and the organ involved may influence the clinical behaviour and management of the lymphoma.
Both B- and T/NK-cell lymphomas can occur in extranodal sites, in which B-cell lymphoms are more common. At most of extranodal sites, DLBCL-NOS is the most frequent lymphoma subtype. Although sharing features typical of DLBC-NOS at any site of destructive tumours composed of diffuse sheets of large atypical B cells with prominent nucleoli and a high proliferative rate, DLBCL arising at some extranodal sites has characteristic features. For example, DLBCL of the testis and DLBCL of the central nervous system (DLBCL-CNS) share characteristic deletions of chromosome 6p21.3 leading to loss of HLA genes, not seen in nodal DLBCL. Clinically, DLBCL-NOS of Waldeyers ring and the GI tract have a better prognosis than DLBCL-NOS) overall, while testicular DLBCL-NOS has a worse outcome with a tendency for spread or relapse to other extranodal sites, particularly the CNS, and a propensity for late relapse.(Bacon, et al.2009. Swerdlow, et al ,2008. Swerdlow, et al ,2016. )

DLBCL-NOS arising at some extranodal sites has characteristic features, which arising in bone often has multilobated nuclei, and those of the testis and stomach are usually of non-germinal centre immunophenotype while those of the small intestine and Waldeyers ring are more often of germinal centre phenotype. DLBCL almost always expresses pan-B-cell markers, such as CD20. Most are bcl-6+, many are bcl-2+, and a minority are CD10+ (Swerdlow, et al ,2008. Ferry , 2008).

DLBCL is the most common extranodal lymphoma, and it is the most common lymphoma encountered in GI, the central nervous system, the eyes, the paranasal sinuses, Waldeyer ring, bone, heart, adrenals, and other sites. DLBCL is mainly found in older adults, with a median age in the seventh decade, but younger adults and children are occasionally affected. There is a slight male preponderance overall, but this varies among anatomic sites (Swerdlow, et al ,2008. Ferry , 2008).

Patients usually present with a rapidly enlarging tumor mass at single or multiple extranodal sites. DLBCL typically produces large, destructive lesions that may invade adjacent structures. Almost half of the patients have stage I or II disease. Most patients are asymptomatic but when symptoms are present they are highly dependent on the site of involement. Extranodal DLBCL-NOS is relatively increased in frequency in immunosuppressed individuals (Swerdlow, et al ,2008. Ferry , 2008. Bacon, et al.2009).

Microscopic examination reveals a diffuse proliferation of large cells with round, oval, irregular, or lobated nuclei, distinct nucleoli, and scant cytoplasm. In a few cases, neoplastic cells may be bizarre or anaplastic, and in occasional cases, they may show plasmacytoid differentiation. In some cases, there is a concomitant component of low-grade lymphoma or a history of low-grade lymphoma ( marginal zone lymphoma, follicular lymphoma, etc) consistent with large-cell transformation. 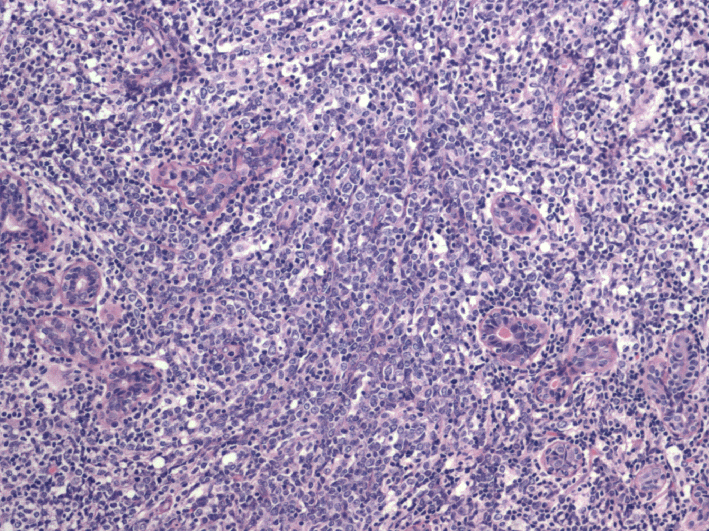 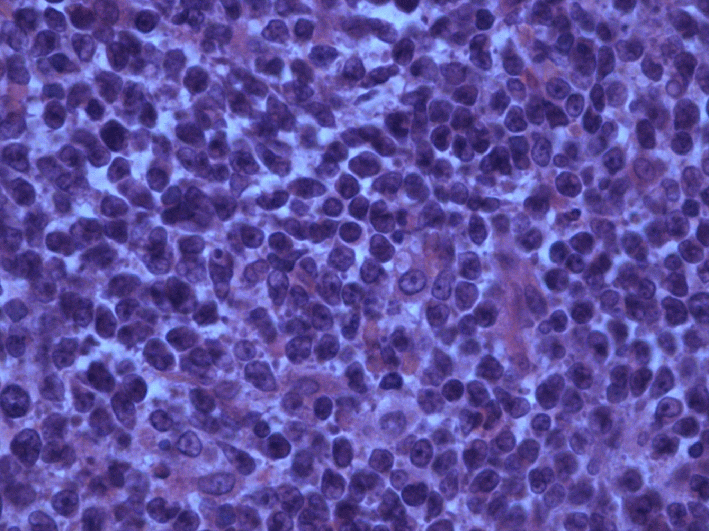 Figure 2. The lymphoid cells are large, with oval nuclei and distinct nucleoli. (HE staining). 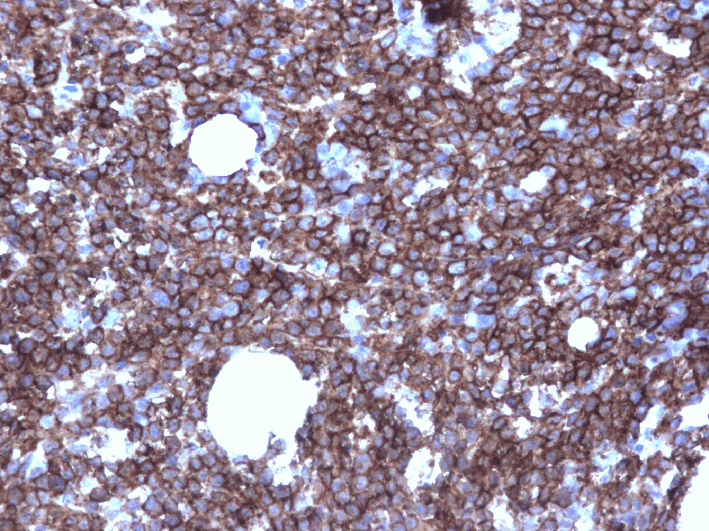 Figure3. The cells are positive for CD20.

Both the lymphoma subtype and the organ involved may influence the clinical behaviour and management of the lymphoma. DLBCL are aggressive but potentially curable with multi-agent chemotherapy. The CHOP regimen has been the mainstay of therapy for several decades. The addition of the anti-CD20 monoclonal antibody rituximab to CHOP ( R-CHOP) has led to a marked improvement in survival (Swerdlow, et al ,2008. Ferry , 2008. Bacon, et al.2009). One study suggests that anatomical location in B-NHL is governed by the differential expression of specific adhesion/motility molecules and provides implications for therapeutic strategies that aim to disrupt protective micro-environmental interactions (Middle, et al. 2015.).

Clinically, DLBCL of Waldeyers ring and the GI tract have a better prognosis than DLBCL overall, while testicular DLBCL has a worse outcome with a tendency for spread or relapse to other extranodal sites, particularly the CNS, and a propensity for late relapse (Swerdlow, et al , 2008. Bacon, et al.2009).