Review on i(4p) in myeloid malignancies, with data on clinics, and the genes involved.

+i(4p) as sole cytogenetic aberration represents less than 1% of cases of myeloid malignancies. The median age is 60 years old (32-79), the M/F sex ratio is 6:1

No particular cytologic feature is associated with the presence of a supernumerary i(4p). The median white blood cell count is 6.95 (2.7-49). Thrombocytopenia is reported in 5 of the 7 cases. Among AML cases, it seems there is an association with a monocytic differentiation: indeed three of the four precedent AML cases were classified into acute myelomonocytic leukemia (Hagemeijer et al., 1981; Hoo et al., 1995; Soriani et al., 2010) and in one case, despite the absence bone marrow evaluation and the absence of peripheral monocytosis, the expression of CD4 and CD11c on blast cells demonstrated by flow cytometry was consistent with this observation (Richebourg et al., 2016). No specific morphologic feature is described in MDS cases.
Cytometry No common phenotype arises from the 3 cases with phenotypic data published.

The 2 AML cases with molecular characterization demonstrate the same profile with the presence of NPM1 mutation and the absence of FLT3-ITD mutation (NPM1+/FLT3-ITD-).

Therapeutic data are available for 3 of the 5 AML cases: the patients received idarubicine + cytarabine based induction chemotherapy followed either by no consolidation or consolidation by chemotherapy or autologous peripheral blood stem cell transplantation.
Therapeutic data are available for one of the two MDS cases: the patient received azacytidine and achieved transfusion independence.

100% of AML patients with follow up data achieved a complete remission. Only 1 case of relapse is reported, 1 year after the diagnosis. Interestingly, this case presented a double supernumerary i(4p) at diagnosis, which could be considered as a clonal evolution and may have had an impact on the risk of relapse.
Since no specific prognostic significance is attached to the presence of supernumerary i(4p), this abnormality should be included into the intermediate cytogenetic subgroups according to the ELN (Döhner et al., 2010) and R-IPSS (Greenberg et al., 2012) classifications for AML and MDS respectively.

Note
No specific gene or protein are described. Supernumerary i(4p) is reported as the sole karyotypic abnormality, both at diagnosis and relapse, suggesting its role as a primary genetic alteration in pathogenesis. The presence of extra isochromosomes leads to gain of genetic material and consequently to amplification of genes possibly involved in the neoplastic process. Overexpression of genes located on 4p but not on 4q may play a crucial role in the pathogenesis of MDS and AML with supernumerary i(4p). Different cancer associated genes mapping on the short arm of chromosome 4 such as CD38, FGFR3, MED28, S100P, RHOH or TACC3 may be involved. Among them, the role of FGFR3 in signal transduction and activation of multiple signaling pathways regulating cell proliferation, differentiation, migration and apoptosis is well known, and an oncogenic role for FGFR3 overexpression has already been proposed in various haematological disorders, including myeloid neoplasm (Dvorak et al., 2003). However, it remains speculative whether this a "dosage effect" of FGFR3 could account in the development of myeloid neoplasm with supernumerary i(4p).

Isochromosome 4p10 results in the loss of the long arm (4q) and duplication of the short arm (4p) of one chromosome 4 leading to partial 4q monosomy and partial 4p trisomy.
This rare abnormality has been reported in different phenotypes of solid tumors (adenocarcinoma, squamous cell carcinoma, melanoma, leiomyosarcoma, astrocytoma, medulloblastoma), usually in complex karyotype, and in various types of haematological disorders: Acute Myeloid Leukaemia (AML), Myelodysplastic Syndromes (MDS), Hodgkin and non Hodgkin lymphoma, myeloma.
Whereas in solid tumors or lymphoid neoplasia this abnormality is observed as a part of complex karyotypes, in myeloid malignancies it is only reported as an isolated supernumerary i(4p), except for one case with a double supernumerary i(4)p (Soriani et al., 2010), assuming the fact that the gain of isochromosome 4p may be a sufficient event for the pathogenesis of myeloid neoplasia. To date, only 7 cases have been documented in myeloid neoplasms, all reported either in AML or MDS (Hagemeijer et al., 1981; Hoo et al., 1995; Chen et al., 1999; Soriani et al., 2010; Desangles et al., 2014; Richebourg et al., 2016).
According to literature, there is a male predominance since 6 of the 7 cases are male patients and, among AML cases, it seems there is an association with a monocytic differentiation of blast cells.
Because of its rarity, no specific prognosis significance is associated with the presence of a supernumerary isochromosome 4p in myeloid malignancies. 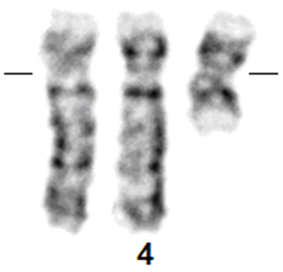