Myelodysplastic syndrome with excess blasts (MDS-EB) represents the most clinically aggressive end of the continuum of the myelodysplastic syndromes (MDS). All MDS are characterized by clonal, ineffective hematopoiesis with maturation defects and increased apoptosis resulting in peripheral blood cytopenias, abnormal myeloid maturation (dysplasia) and variable risk of progression to bone marrow failure and/or acute myeloid leukemia. Progressive degrees of restricted myeloid maturation represented by abnormally increased numbers of morphologically-defined blasts in the blood and/or bone marrow is the key feature separating MDS-EB from the other myelodysplastic syndromes and is strongly associated with increased risk of disease progression and decreased survival. Metaphase chromosome analysis of bone marrow myeloid cells is the cornerstone of documenting clonal hematopoiesis to establish the diagnosis of MDS and for risk stratification of patients with confirmed MDS. Molecular analyses are becoming increasingly utilized for diagnosis and prognosis.

Myelodysplastic syndromes may affect individuals of any age, gender or ethnicity. Accurate measurement of the incidence of myelodysplastic syndromes, including MDS-EB, is very difficult to obtain due to underreporting and underdiagnosing, but clearly shows a marked increase incidence with age. Some estimates are as high as 63.9 / 100,000 in people ≥85 y.o. (Cogle et al., 2015). The median age of diagnosis is around 71 years (Pfeilstöcker et al., 2016).

Patients may present with asymptomatics cytopenias identified on routine laboratory testing or due to symptoms related to cytopenias, e.g. fatigue or exercise intolerance due to anemia, infections due to neutropenia and/or bleeding due to thrombocytopenia. Diagnosis requires examination of blood and bone marrow for morphological features of disordered maturation of myeloid lineages ("dysplasia") and enumeration of blast cells in blood and marrow correlated with genetic and often molecular testing. 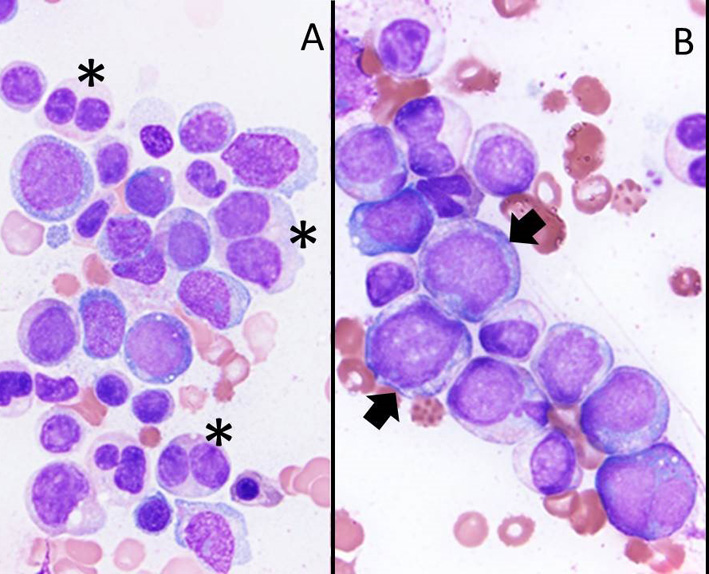 As about 40% of patients with MDS-EB will have normal metaphase chromosomes, many investigators have sought to use higher-resolution molecular techniques to identify diagnostic, prognostic and predictive molecular aberrations.
The use of FISH for as an adjunct to metaphase chromosome analysis in MDS is controversial. Many physicians routinely request a panel of interphase FISH probes to common and/or clinically significant abnormalities (e.g. -5/5q-, +8, -7/7q-, 20q-, 17p/TP53) a priori for all patients with suspected or confirmed MDS. However, several studies have shown essentially no additional clinically useful information is discovered with this technique if the metaphase study is adequate. Interphase FISH may be useful for specimens without adequate metaphases. Metaphase and/or interphase FISH may also be helpful to clarify subtle abnormalities of metaphase spreads.
Array comparative genomic hybridization (aCGH) and single nucleotide polymorphism array (SNP array) are particularly attractive methods to interrogate the entire genome at a fairly fine resolution to identify the gains and/or losses of chromosomal material that are common in MDS. Additionally, SNP arrays can identify copy-neutral loss of heterozygosity (CN-LAH) which can functionally inactivate tumor suppressor genes, similar to gross monosomies and deletions. These techniques have been shown to confirm most, but not all chromosomal abnormalities concurrently identified in metaphase chromosome analysis. They also detect additional abnormalities in genes or regions implicated in the pathogenesis or prognosis of patients with myeloid neoplasia. The precise clinical significance of detecting these submicroscopic chromosomal abnormalities in patients with MDS is currently under extensive study.
Sequence level techniques, including targeted sequencing of specific genes or broader whole-genome sequencing (WGS) may be used to document clonal hematopoiesis and to provide prognostic and predictive data to patients with established MDS. Targeted sequencing techniques will identify mutations in up to 90% of all MDS patients. Commonly mutated genes include: SF3B1, TET2, SRSF2, ASXL1, DNMT3A, RUNX1, U2AF1, TP53, and EZH2 (Haferlach et al., 2014). The clinical significance of specific mutations is currently evolving (Bejar et al, 2017).
In patients with MDS-EB, the issue of clonality is rarely a question, but the predictive information about which therapies may work for an individual patient may prove highly beneficial, such as mutations of IDH1 /IDH2 that can be targeted by specific drug therapies. In addition, these techniques have identified novel genetic abnormalities and mechanisms, e.g. chromothripsis, which are improving our understanding of the mechanisms of disease development and progression (Abaigar et al., 2016).

Treatment options for patients with MDS-EB include a broad spectrum of options from supportive care, low-intensity therapies, to high-intensity therapies +/- stem cell transplantation. Given that the incidence of MDS-EB is highly positively correlated with age, it is no surprise that many patients will have significant comorbidities and decreased performance status at the time of diagnosis, which are likely to limit their tolerance of higher-intensity chemotherapy and stem cell transplant.
Supportive care options are aimed at ameliorating or lessening symptoms and improving quality of life, such as RBC transfusion to improve symptoms of decreased oxygen carrying capacity or platelet transfusions for bleeding events. Antifibrinolytics may benefit patients who are unresponsive to platelet transfusion. Some patients may also respond to colony stimulating factors such as erythropoietin, granulocyte colony stimulating factor, granulocyte-monocyte stimulating factor and thrombopoietin mimetics.
Low intensity therapeutic options mostly center hypomethylating agents such as 5 azacytidine or decitabine or low-dose cytotoxic chemotherapies such a as cytosine arabinoside. Some patients will respond to immunosuppression (ATG) and/or biological response modifiers (lenalidomide) suggesting an immune-mediated etiology in some individuals.
High intensity treatments are similar to those used for acute myeloid leukemia such as intensive induction chemotherapy, e.g. idarubicin/daunorubicin, cytarabine/fludarabine, topoisomerase inhibitors, etc. +/- allogeneic stem cell transplantation.

MDS-EB is usually a clinically and genomically unstable disease state with a very high rate of progression to death due to bone marrow failure and/or acute myeloid leukemia (>20% blasts). Cytogenetic evolution often accompanies and/or precedes clinical and morphological progression.

The prognosis for patients with MDS has been studied intensively leading to several risk stratification models, e.g. IPSS, IPSS-R and IPSS-RA (ie, IPSS-R including age),the original WHO classification-based Prognostic Scoring System (WPSS) applying transfusion need, its modification using hemoglobin thresholds (WPSS 2011) and its modification including age (WPSS-A), and the Lower-Risk Prognostic Scoring System (LR-PSS). (Pfeilstoeker et al., 2016) The most commonly used system in clinical practice is the IPSS-RA. (Greenberg et al, 2012) These systems all incorporate chromosomal analysis with clinical and morphological features. Most patients with MDS-EB will be stratified into higher-risk categories with median overall survival about 9 months to 2 years and about 50-90% risk of progression to AML within 5 years. 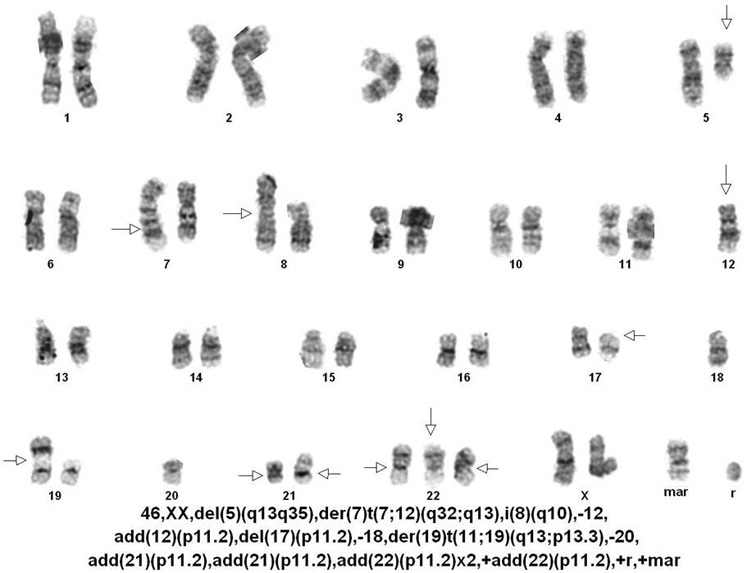