The canonical isoform 1 is composed of 2002 amino acids.
The catalytic dioxygenase domain is located at the C-terminal part of the protein, inside a cysteine-rich region. Isoforms 2 and 3 appear as truncated proteins whose function is not yet well understood.

Wide, mainly in haematopoietic tissues and in some specialized areas of the nervous tissue. 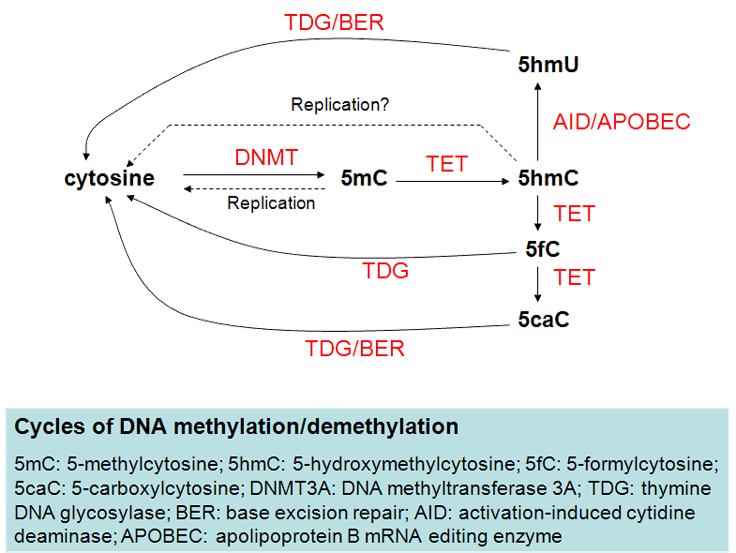 Methylcytosine dioxygenase dependant of α-ketoglutarate (α-KG, also called 2-oxoglutarate) and Fe++, which catalyses conversion from 5-methylcytosine (5mC) to 5-dihydroxymethylcytosine (5hmC). TET proteins play a key role in epigenetic regulation of the transcription. The transition from 5mC to 5hmC, and later to 5-formylcytosine (5fC) and 5-carboxylcytosine (5caC), is considered as a key step in the process of DNA demethylation at CpG islands and other sites. The enrichment in 5hmC in CpG islands near or inside promoter sites, as well as in intragenic regions, leads to increased gene expression. 5mC can be restored enzymatically from 5fC and 5caC, but not from 5hmC. The global epigenetic regulation of transcription seems to depend on the dynamic balance between 5mC and 5hmC (Branco et al., 2012; Kohli and Zhang, 2013) (figure 1).
The role of TET2 in haematopoiesis is pleiotropic, including self renewal of haematopoietic stem cells (HSCs), lineage commitment and cell line differentiation. TET2 is strongly expressed in progenitors and HSCs, and progressively repressed during differentiation. In mice the consequence of targeted inactivation of the Tet2 gene is a decrease of 5hmC and an increase of the number of mutated HSCs/progenitor cells, with a selective advantage over wt HSCs (Ko et al., 2011).
TET2 and TET3 proteins have a strong interaction with O-GlcNac transferase (OGT), independent from their catalytic activity on 5mC. OGT mediates the addition of O-GlcNac to ser and thr residues of many intracellular proteins. The link TET2/3-OGT promotes the activity of OGT: this complex binds to chromatin and contributes to promoters activation by enrichment in histone H3K4me3 (Solary et al., 2014).
Tet1 and Tet2 are also expressed in murine embryonic stem cells. To be noted the role of murine Tet2, in conjunction with the enzyme poly(ADP-ribose) polymerase-1 (Parp1), at an early stage of epigenetic reprogrammation of somatic cells into induced pluripotent stem cells (IPSCs) (Doege et al., 2012).

TET2 is one member of a family comprising the 3 evolutionary conserved genes TET1, TET2 and TET3 in mammals. Only TET1 and TET2 are involved in malignant haematological diseases. The 3 proteins have two highly conserved domains in the middle of the protein and at the C-terminal extremity. TET1 and TET3 contain also a CXXC DNA binding zinc finger domain at the N-terminal extremity, which is not present in TET2. However there is a CXXC domain in a gene named CXXC4 or IDAX located 650kb proximal from TET2, which results from a chromosomal inversion affecting the ancestral TET2 gene. IDAX is oriented and transcribed in opposite direction from TET2, it regulates its expression and would be involved in its DNA binding (Ko et al., 2013).

All types of somatic TET2 mutations were observed in cancer. The more prominent implication was described in haematological malignancies. However TET2 activity alteration, either by mutation or transcriptional mRNA reduction, was subsequently reported in a great variety of human tumours.
The implication of the gene in haematological malignancies was first detected after the observation of reciprocal translocations involving a sub microscopic 4q24 deletion in tumour cells (Viguié et al., 2005). All mutations alter the catalytic activity, leading to a loss-of-function of the enzyme. Nonsense and frame shift mutations, which result in a truncated protein, occur all over the gene. But critical missense mutations occur only in the two evolutionary conserved domains of TET2. Missense variations outside of these two domains are considered as germinal polymorphisms. Both copies of the gene are altered in less than half of the patients, suggesting a role for haploinsufficiency. Consequently TET2 must be considered as a tumour suppressor gene.
In murine models, the consequence of Tet2 inactivation is a depletion of 5hmC in bone marrow cells, an increase of the pool of HSCs, and an orientation of maturation towards monocyte/macrophage differentiation (Quivoron et al., 2011). The same effect is obtained in vitro on human cell lines or CD34+ cells, by shRNA knockdown of TET2 gene (Pronier et al., 2011).
Mutations of TET2 and of IDH1/IDH2 are mutually exclusive, suggesting that they act in the same pathway. IDH1 and IDH2 are the two genes coding for an isocitrate deshydrogenase, they catalyse the decarboxylation of isocitrate to α-ketoglutarate (α-KG) in the Krebs cycle. IDH mutations lead to a gain of function and the production of the R enantiomer of 2-hydroxyglutarate (R-2HG) instead of α-KG. As α-KG is a crucial cofactor for the activity of TET2, the protein is inactivated by the production of R-2HG instead of α-KG.
Mutations of IDH1/IDH2 are observed in many tumours including haematological malignancies with the same final epigenetic effect as TET2 inactivation, mainly a global promoter hypermethylation.

Entity name
Ph negative myeloproliferative neoplasms (MPN)
Note
Frequency: mutated in 10-16% of polycythemia vera, 4-11% of essential thrombocytemia, 7-17% of idiopathic myelofibrosis, 14% of myelofibrosis post PV or ET, 29% of mastocytosis. TET2 mutation is a very early event, preceding JAK2 mutation in the major part of cases with JAK2 V617F mutation. It is associated with the expansion of the mutated clone (Delhommeau et al., 2009; Tefferi et al., 2009b). However there is no notable correlation with prognosis.
TET2 mutations were also observed during the progression from MPN to AML, appearing as a later event.
Entity name
Ph positive chronic myeloproliferative leukemia (CML)
Note
No TET2 mutation detected in chronic phase.
In contrast mutations were detected in 8-12% of accelerated or blastic phase (Makishima et al., 2011; Roche-Lestienne et al., 2011).
Entity name
Chronic myelomonocytic leukemia (CMML)
Note
Frequency : TET2 mutated in 42-50%, being by far the most frequent molecular event in CMML.
Prognosis
Controversial. In some clinical studies CMML with TET2 mutated have a shorter overall survival and a higher monocyte rate compared to wt CMML. However other studies show less genomic alterations and a better prognosis in TET2 mutated patients (Tefferi et al., 2009a; Smith et al., 2010).
Genome-wide DNA methylation studies show that TET2 mutated CMML express a lower level of hypermethylation than wt CMML and constitute a subtype with distinct epigenetic characteristics.
Entity name
Myelodysplastic syndrome (MDS)
Note
Frequency : TET2 mutated in 12-26%. As in CMML, TET2 mutation is the most frequent molecular event, before ASXL1 (~ 14%) and RUNX1 (~ 8%) mutations. There is no significant association with either sub-type of MDS. However there is a correlation between TET2 mutation and MDS with a normal karyotype (Tefferi et al., 2009a; Langemeijer et al., 2009; Smith et al., 2010).
Prognosis
So far, no independent prognosis value.
Entity name
Acute myeloid leukemia (AML)
Note
Frequency : from 7 to 27% of primary AML.
Prognosis
The impact of TET2 mutations on AML prognosis is controversial. TET2 mutations are significantly associated with normal karyotype, older medium age, hyperleucocytosis and blasts rate more elevated. According to European Leukemia Net criteria, TET2 mutation impairs the prognosis of cytogenetically normal AML with favourable risk (NPM1 and/or CEBPA mutated, FLT3-ITD negative), in comparison with wt-TET2 patients (Metzeler et al., 2011). A more recent study from the EORTC group in AML patients
Entity name
Blastic plasmacytoid dendritic cell neoplasm
Note
One study of 13 cases of this rare haematopoietic neoplasm of uncertain lineage showed TET2 frame shift, nonsense or missense mutations in 7 cases (53%). In 3 cases at least the mutations were biallelic (Jardin et al., 2011).
Entity name
Lymphoproliferative disease
Note
Frequency: TET2 mutations were observed largely more frequently in T-cell lymphomas than in B-cell lymphomas (12% vs 2%). One to 3 TET2 mutations were found in 47 to 76% of angioimmunoblastic T-cell lymphoma (AITL), often associated with mutations of DNMT3A, a gene involved in cytosine methylation. In peripheral not otherwise specified T-cell lymphoma (PTCL-NOS), 38% harboured a TET2 mutation (Odejide et al., 2014).
TET2 mutations can occur in early or advanced stages of lymphoid differentiation. Some patients have a concomitant or previous myelodysplastic syndrome, and the same TET2 mutation is found in both cell lineages, favouring a common origin from an early stem cell (Viguié et al., 2005; Delhommeau et al., 2009).
More recently TET2 mutations were observed in12% of diffuse large B-cell lymphomas, composed of 5% missense and 7% nonsense mutations (Asmar et al., 2013).
Entity name
Low grade diffuse glioma
Note
More than 85% of low grade diffuse glioma have an IDH1/2 mutation. TET2 gene was explored in those lacking one of these two mutations. No TET2 mutation was found but TET2 promoter methylation was detected in 5 of 35 cases (14%). No TET2 alteration was observed in all cases with IDH1/2 mutation (Kim et al., 2011).
Entity name
Other cancer types
Note
Some studies show that 5hmc reduction is significantly associated with tumorigenesis in a great variety of tumours, and that 5hmC depletion is frequently linked to a TET2 mutation or transcriptional inactivation, in cancers of breast, lung, pancreas, liver and probably colon and prostate (Yang et al., 2013).