Myeloid/Lymphoid neoplasms with abnormalities of PDGFRA

This insert represents a review of myeloid and lymphoid neoplasms with abnormalities of PDGFRA including clinical presentation, morphologic review, and cytogenetic findings.

Myeloid and lymphoid neoplasms with abnormalities of PDGFRA are neoplasms in which eosinophilia is highly typical, although not required. For years, most patients with eosinophilia and abnormalities of PDGFRA were diagnosed with hypereosinophilic syndrome (HES) as karyotype was frequently normal and no secondary cause was identified. However, in 2001, a subset of patients with HES were found to show responsiveness to tyrosine kinase inhibitors (TKI), specifically imatinib. Investigation of the tyrosine kinases within these patients revealed a cryptic deletion resulting in fusion of PDGFRA to FIP1L1. After this groundbreaking research, the entity was first formally accepted in the 2008 edition of the World Health Organizations Classification of Tumours of Haematopoietic and Lymphoid Tissues along with abnormalities of PDGFRB and FGFR1. In the WHO 2016 edition, myeloid and lymphoid neoplasms with eosinophilia and t(8;9)(p22;p24.1) PCM1 / JAK2 is now recognized as a provisional entity.

The cell of origin is a hematopoietic cell with commitment to eosinophilic differentiation. These clonal eosinophils may show evidence of activation by immunohistochemistry, with CD23, CD25, and/or CD69 expression.

There is an overwhelming male predominance with a median age of onset of 40-years-of age, although they may present across a broad age range.

In patients with abnormalities of PDGFRA, eosinophilic atypia may be present (Figure 1), but is variable and not required. This includes atypical nuclear segmentation, hypogranular cytoplasm with puddling of eosinophilic granules, more variability in granule texture/color, and cytoplasmic vacuolation. Eosinophils are typically mature with usually only rare eosinophilic precursors noted (Figure 2). Anemia and thrombocytopenia are common, while monocytosis and basophilia are infrequent (Savage et al., 2013).Bone marrow trephine biopsies are typically hypercellular with increased eosinophils and their precursors (Figure 3) (Bain et al., 2008). Fibrosis may also be increased and can be highlighted with a reticulin histochemical stain (Figure 4). Mast cells are often increased as well, either in loose or cohesive clusters, and may have atypical spindled morphology. Moreover, they may have an aberrant immunophenotype, frequently expressing CD25 or even CD2 and CD25. However, the findings usually fall short of criteria for systemic mastocytosis as KIT D816V mutation is not present and serum tryptase levels are typically less than 20 ng/mL.

In this smear obtained from a patient with PDGFRA abnormality, eosinophilia is noted with some atypical morphology. Specifically, granules unevenly fill the cytoplasm with one eosinophil having few cytoplasmic vacuoles. In addition, the nuclear segmentation is atypical with increased nuclear lobes noted in one eosinophil. (Wright Giemsa stained peripheral blood smear, original magnification 500x). 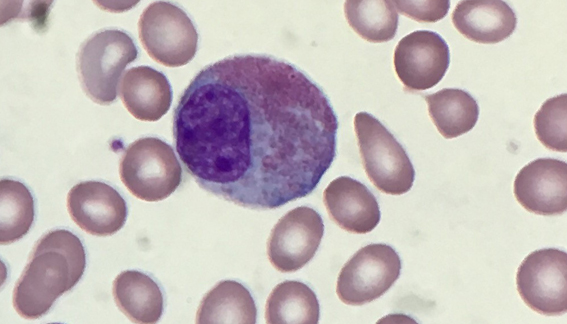 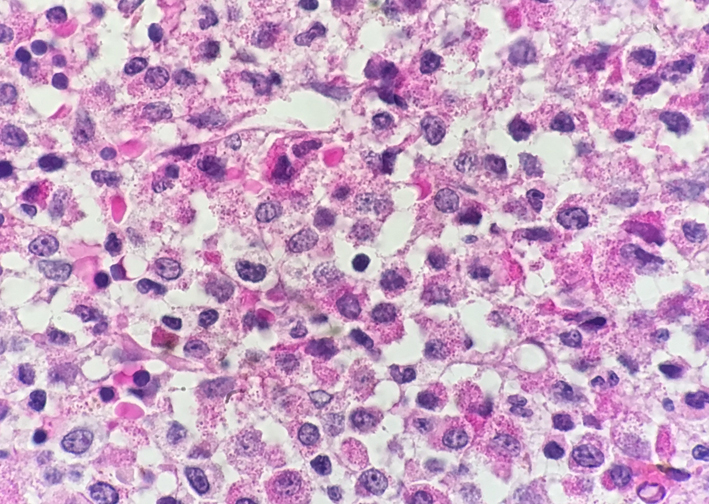 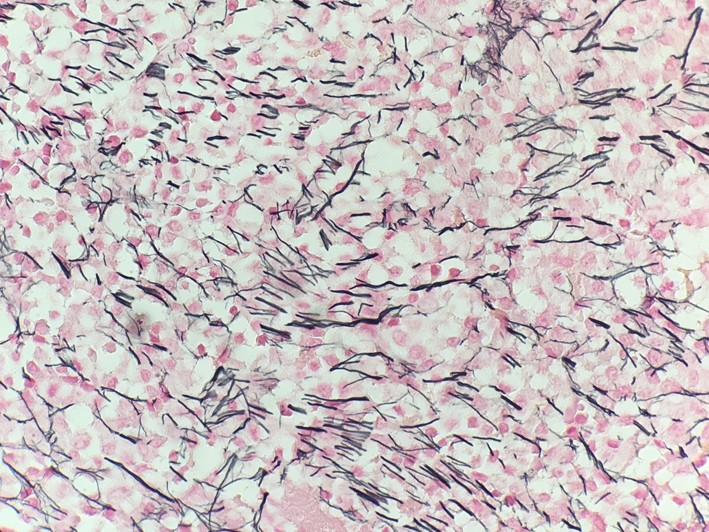 Patients with abnormalities of PDGFRA are exquisitely sensitive to imatinib. An initial dose of 100 mg per day leads to complete hematologic response in most patients. If imatinib is discontinued secondary to adverse reactions or very rarely due to resistance, it can be replaced by second or third generation TKI.

Prior to identification of this neoplasm with response to TKI, prognosis was poor. However, now while on maintenance therapy, >90% of patients will achieve complete molecular response. Prognosis is excellent particularly if therapy is initiated prior to organ damage especially cardiac sequela.

Although a number a fusion partners for PDGFRA have been identified (Table 1), the most common by far is FIP1L1 (Bain et al., 2008). The FIP1L1-PDGFRA fusion gene is created by an interstitial deletion on chromosome 4q12 (Cools et al., 2003); this deletion includes cysteine-rich hydrophobic domain 2 ( CHIC2) (Pardanani et al., 2003). The deletion is most often cryptic resulting in a normal karyotype, necessitating FISH for identification (Figure 4). However, rarely it may be caused by chromosomal rearrangement. .
Fusion partner genes and locations
>
Table 1. Myeloid and lymphoid neoplasms with eosinophilia and abnormalities of PDGFRA - reported fusion partners. 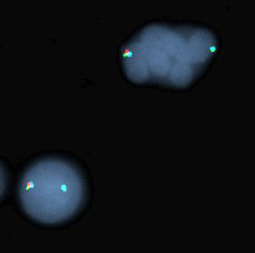 Gene name
PDGFRA (platelet-derived growth factor receptor, alpha polypeptide)
Location
4q12
Note
Platelet Derived Growth Factor Receptor Alpha (PDGFRA) is located on chromosome 4, band q12. It contains 23 exons and spans approximately 65 kb. The encoded protein is 1089 amino acids with molecular weight of 122670 Da. It is inactive as a monomer in the absence of bound ligand. It is a member of the type III class of tyrosine kinase receptors. It contains 5 immunoglobulin-like extracellular domains, a single transmembrane domain, and an intracellular split kinase domain. The protein plays an essential role in the regulation of many biological processes which include cell proliferation, differentiation, migration, and survival.

Myeloid/Lymphoid neoplasms with abnormalities of PDGFRA