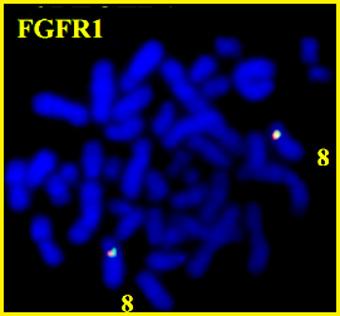 The gene spans 57,697 bases on reverse strand; there are numerous splicing forms, with mRNAs from about 3 kb to 5.688 kb for the canonical form, made of 18 exons. 11 transcripts for Ensembl, 18 transcripts for Swiss-Prot. Different transcripts are expressed in different cells and tissues. Some isoforms are truncated in the extracellular domain (IgI, in particular, is often missing), others in the intracellular domain (TK2 missing) or both. Secreted forms lack the transmembrane domain; TK truncated forms are kinase-deficient. Exon numbering is variable. 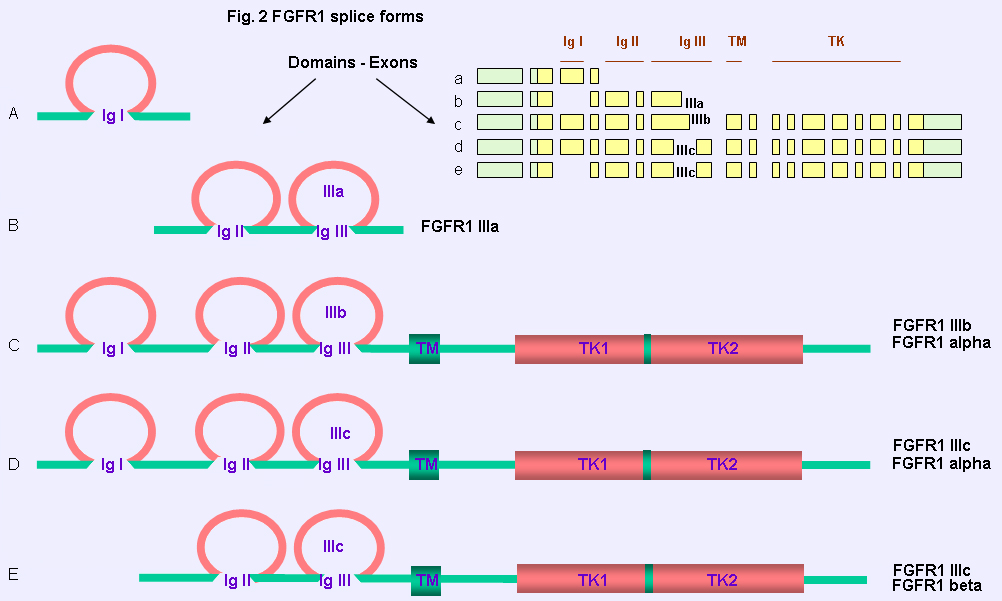 The canonical form comprises 822 amino acids; 100-135 kDa glycoprotein from a 90-115 kDa protein core. FGFR1 is composed of an extracellular ligand-binding domain, a unique transmembrane domain, and a catalytic (tyrosine kinase) cytosolic domain. The extracellular region (with the N-terminus) contains a signal peptide (amino acids (aa) 1-21), 3 immunoglobulin-like loops (aa: 25-119, 158-246, and 255-357 according to Swiss-Prot), with an acidic box (seven glutamic acids in 127-133) between IgI and IgII, a CHD (Cell adhesion molecule (CAM) homogogy domain) in 151-170, and an heparin-binding domain in the begining of the IgII (aa 166-177); this extracellular region is followed by a transmembrane domain (aa 377-397) and an intracellular domain composed of a juxtamembrane domain, which serves as a binding site for phosphotyrosine binding (PTB) domains of proteins such as FRS2 (see below), and a tyrosine kinase domain (aa 478-767) (two kinase domains interrupted by a short kinase insert of 14 amino acids), and a C-terminal tail. A part of the C-terminal tail of FGFR1 containing 28 amino acids binds the SH2 domain of PLCG (PLC gamma). Phosphorylation of Tyrosine 766 is the interactive item with PLC gamma (Itoh et al., 1990; Johnson and Williams, 1993) (Fig 1). A triad of residues N546, E562, and K638 would form a network of hydrogen bounds acting as a molecular brake keeping the kinase in an autoinhibited state (Chen et al., 2007). Details on crystal structure can be found in Eswarakumar et al., 2005. The five tyrosine autophosphorylation sites in the catalytic core of FGFR1 are phosphorylated by a precisely controlled and ordered reaction. The rate of catalysis of two substrates is enhanced by 50- and 500-fold after autophosphorylation of Y653 and Y654, respectively, in the activation loop of FGFR1 (Furdui et al., 2006).

FGFR1, 2 and 3 have distinct expresssion patterns but with overlaps in some tissues (Zhang et al., 2006). FGFR1 and FGFR2 exhibit broad expression in the embryo and latter in life, in contrast with other FGFRs. FGFR1 is predominantly expressed in the brain and in mesenchymal tissues in the embryo, in brain, bone, kidney, skin, lung, heart and muscle in the adulte, but not in liver (Johnson and Williams, 1993) Note: expression of the various isoforms of FGFR1 is shortly described herein above. 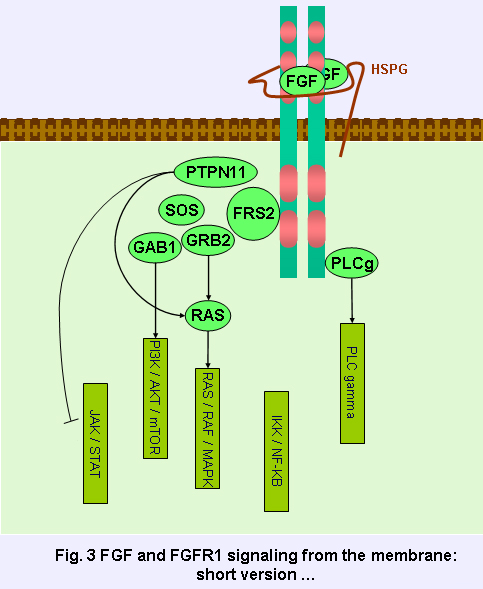 FGF and FGFR1 signaling from the membrane: short version ...
FGF, FGFR and heparan sulfate proteoglycans (HSPG) interact with each other, form a complex. Activation of the FGF-FGFR complex recruits FRS2, PTPN11, GRB2, SOS and GAB1, and also PLCG. The signal further implicates the RAS/RAF/MAPK pathway, the PI3K/AKT/mTOR pathway, the PLC gamma pathway, the JAK/STAT pathway, and the IKK/NF-KB pathway.

Plasma membrane, indeed, but also cytosol and nucleus (see below). 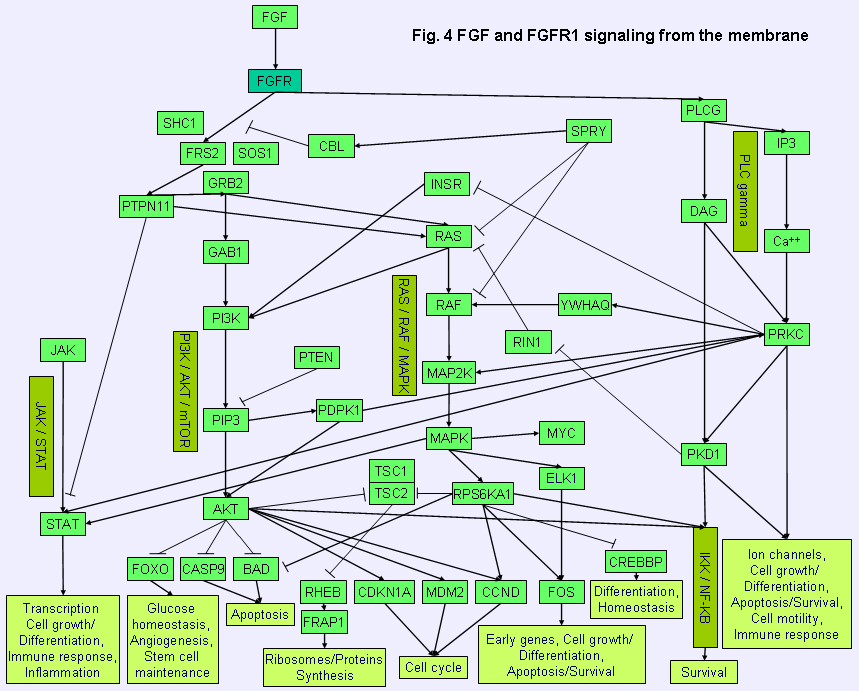 Shortly: Fibroblast growth factors receptors are a family of four receptor tyrosine kinases, named FGFR1 to 4. Each recognizes a unique subset of the fibroblast growth factors (FGF) family of ligands (Table 1).
There are 22 FGF, from FGF1 to FGF23, with no FGF number 15 (see Ornitz and Itoh, 2001). The first family of FGFs consists of FGF1 and FGF2; they can either be secreted or remain intracellular (they possess a nuclear localization signal). The second and third families comprise FGF3-10 and 16-23 and are secreted; the last family (FGF11-14) remain intracellular, they do not bind FGFRs; they are called FHFs (FGF homologous factors).
FGFs bind FGFRs to regulate cell growth, migration and differentiation during embryogenesis, and homeostasis later in life. They act both in mesenchymal and epithelial cells. The ligand-receptor complex, in association with heparin or heparan sulfate proteoglycan (FGF and FGFR both have heparan-binding sites), induces receptor dimerization.
The FGFR1 signaling is achieved by receptor conformational changes upon ligand binding, leading to dimerization and subsequent activation by autophosphorylation of TK intracellular domains. It then activates the MAP (mitogen-activated protein) kinase pathway, necessary for cell cycle progression. However, FGFR1 dimerization leads to the activation of a number of other signaling molecules including the PI3K/AKT/mTOR pathway, the phospholipase Cgamma (PLCgamma ) pathway, the JAK-STAT pathway , and, more indirectly, the IKK/NF-KB pathway (Fig 3). All these pathways interact with other, as is summarized Figure 4.
These functions depend on: 1- the expression of one or multiple FGF and FGF receptors, 2- the various and numerous splicings of the FGFR mRNA, 3- the cell and tissue involved (review in Naski and Ornitz,1998; Ornitz and Itoh, 2001).

FGF-FGFR binding
Surface cell heparin or heparan sulfate proteoglycans (HSPG) interact with FGF to induce growth factor polymerization, binding to FGFR and subsequent dimerization of FGFRs. It is essential for the dimerization and activation of the FGF-FGFR complex. Recent studies showed that KAL1 (Xp22; Kallmann syndrome 1 sequence) acts as an FGFR1-specific modulator and coligand that physically interacts with the FGFR1-FGF-heparin sulfate proteoglycan complex and amplifies the resulting downstream signaling responses (Gonzalez-Martinez et al., 2004).
Note: KAL1, like FGFR1, is involved in Kallmann syndrome (see below).
Proteins which contain either a Src homology (SH2) domain, or a phosphotyrosine binding (PTB) domain can be phosphorylated/activated by the dimerized/activated receptor (herein FGFR1).

SPRY and CBL inhibition
SPRY (sprouty homolog (Drosophila)) competes with PTPN11 and FRS2 for binding to the GRB2-SOS complex, and inhibits the RAS/RAF/MAPK pathway. On the other hand, SPRY prevents CBL-mediated ubiquitylation, endocytosis and degradation of FGFR (Guy et al., 2003; Mason et al., 2006; Dikic and Schmidt, 2007).
Note: SPRY, like FGFR1, is involved in nonsyndromic cleft lip and palate (see below).

Nuclear FGFR1
FGFs may: 1- be secreted (FGF 3-10, 16-23) out of the cell, bind on surface receptors (FGFRs) of other cells and activate signaling cascades as above described; 2- remain intra cellular (FGF 11-14); or 3- both (FGF1, FGF2). Intracytoplasmic FGFs can translocate to the nucleus and act as nuclear signaling molecules.
All the same, FGFRs can be found inserted in the cytoplasmic membrane, but also in the cytosol, and in the nuclear compartment (Fig 5).
FGFR1 (and also FGFR2 and 3 but not FGFR4) contains an atypical transmembrane domain (TM), with a probable beta-sheet conformation, instead of the more membrane-stable alpha-helical conformation of other single TM tyrosine kinase receptors (Myers et al., 2003).
ARF6 (14q21; ADP-ribosylation factor 6) and DNM2 (19p13; dynamin 2) facilitate surface FGFR1 internalization, RAB5 (RAB5; member RAS) facilitates the trafic into the endosome. RPS6KA1 would also favor FGFR1 release from the membrane to the cytosol and also prior to nuclear import. KPNB1 (17q21; importin beta) would facilitate FGFR1 nuclear import. VHL (3p25; von Hippel-Lindau tumor suppressor) is recruited to FGFR1-containing endosomal vesicles and exhibits a functional relationship with RAB5A and DNM2 in FGFR1 internalization. In cooperation with CREBBP, Nuclear FGFR1 (nFGFR1) up-regulates gene transcription of FGF2, CCND1 (11q13; cyclin D1), JUN (1p32; jun oncogene), NEFL (8p21; neurofilament, light polypeptide), TH (11p15; tyrosine hydroxylase) (Groth and Lardelli, 2002; Bryant and Stow, 2005; Hsu et al., 2006; Stachowiak et al., 2007). 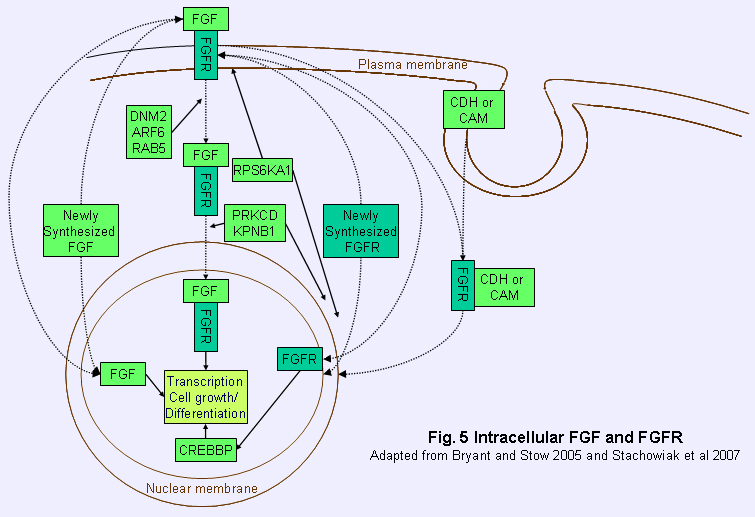 Pfeiffer syndrome is due to an activating mutation of FGFR1. 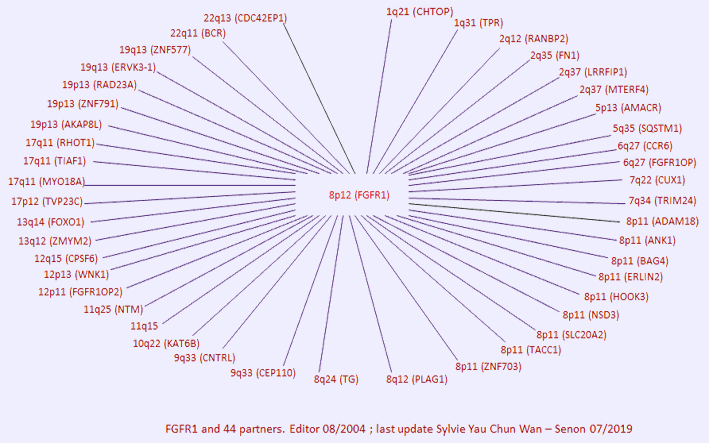