Biological overview: Importin beta 1 is a prominent member of the karyopherin beta family of transport receptors (reviewed by Ström and Weis, 2001; Mosammaparast and Pemberton, 2004; Chook and Süel, 2011). It was originally identified as an indispensable component for nuclear import of proteins that function in the nucleus of interphase cells (Moore and Blobel, 1992; Adam and Adam, 1994; Radu et al., 1995; Görlich et al., 1995). Due to the importance of nuclear transport of proteins (e.g. DNA replication and repair factors, transcription factors, epigenetic regulators, hormone receptors, oncogenes and tumor suppressors; see Fulcher and Jans, 2011), that discovery was awarded the Nobel prize for Biomedicine to Prof. Günter Blobel in 1999 (www.nobelprize.org/nobel_prizes/medicine/laureates/1999/blobel-lecture.html).
The discovery of importin beta 1 as a nuclear import vector overshadowed other functions for some time, but it is now well recognized that importin beta 1 plays multiple roles in cell life and division beyond nucleo-cytoplasmic transport, as will be explained in more depth below:
- at mitotic onset nucleo-cytoplasmic transport ceases and importin beta 1 assumes new functions as an inhibitor of mitotic factors with which it interacts and participating in many mitotic steps (see below). Because these factors are not biologically productive when bound to importin beta 1, the latter is regarded as a negative regulator of mitotic progression (reviewed by Ciciarello et al., 2007; Kalab and Heald, 2008);
- Importin beta 1 also regulates the reorganization of the nucleus and the nuclear envelope at mitotic exit prior to the resumption of nucleo-cytoplasmic transport in the next interphase (reviewed by Harel and Forbes, 2004; Güttinger et al., 2009); in this processes it largely operates via nuclear envelope precursors and nucleoporins (NUP), the constituents of nuclear pore complexes (NPCs) that fenestrate the nuclear envelope.
Importin beta 1 is therefore a versatile regulator of critical importance to many essential cellular processes and is growingly implicated in the onset of genomic instability in cells in which it is expressed in a deregulated manner.

Figure 2. Localization of importin beta 1 by immunofluorescence, in a human HeLa cell in interphase. Importin beta 1 (red) accumulates in the nucleus and around the nuclear envelope, with a regular, punctuate pattern, typical of the association with nuclear pores. The nucleus is visualized by staining the DNA with 4,6-diamidino-2-phenylindole (DAPI, blue) and the cell shape is depicted by staining the cytoskeleton using an antibody against alpha-tubulin (green). Bar: 5 μM.

The localization of importin beta 1 protein is related to its function. In interphase, when it acts in nuclear import of proteins, it is particularly abundant at the nuclear envelope, with a punctuate pattern corresponding to NPCs (figure 2). This localization is particularly evident after treatment with mild detergents that remove soluble importin beta 1.
At mitotic onset, when the nuclear envelope breaks down, importin beta 1 associates with mitotic microtubules, as determined in co-sedimentation assays; importin alpha also co-sediments with mitotic microtubules. The association of both importins alpha and beta 1 with the mitotic spindle microtubules requires the minus end-directed motor dynein (figure 3; Ciciarello et al., 2004). Due to the minus-end directed movement of dynein, the importin alpha/beta dimer can transport NLS-containing spindle regulatory factors to the poles, and thus regulate the mitotic apparatus organization and function.
By immunofluorescence staining, importin beta 1 co-localizes with the mitotic spindle and accumulates to the spindle poles (figure 4, top and midde rows), consistent with the microtubule association assay (figure 3). In early telophase, when chromosome segregation is complete, importin beta 1 dissociates from the microtubules and relocalizes around the reforming nuclei (Ciciarello et al., 2010; figure 4 bottom row).

Figure 3. Sedimentation assay of mitotic microtubules (MTs) after centrifugation through a sucrose gradient; tubulin monomers and dimers remain in the supernatant. Microtubule-associated proteins were analyzed by Western immunoblotting of the MT pellet, revealed by alpha-tubulin antibody. As schematized on the right, ATP addition recovers proteins that associate with MTs directly: under these circumstances, no importin beta 1 signal is detected in the MT pellet (Western panel, lane 2). The addition of non-hydrolyzable AMPPnP analogue recovers proteins that associate with MTs via motors: under these conditions, both importin beta 1 and importin alpha co-sediment with the MT pellet, as does the mitotic kinase p34/cdk1 (lane 1). To identify the specific motor protein that bridges importin alpha and beta 1 to mitotic MTs, the pellet was incubated with antibody to the dynein intermediate chain (anti-DIC), which sequesters dynein: under these conditions, importin alpha and beta 1 detach from the MT pellet (lanes 4), as does dynamitin, whereas a non-specific IgM has no effect (lane 3). These assays indicate that importin alpha and beta 1 interact with mitotic MTs via dynein. Details in Ciciarello et al., 2004. 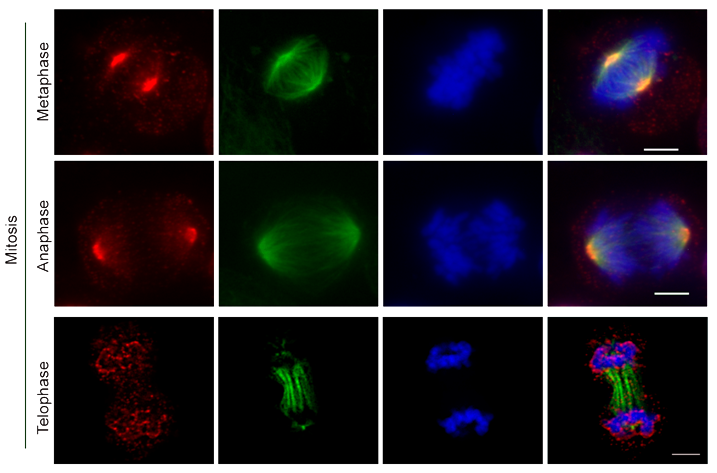 Figure 4. Importin beta 1 localization in human HeLa cells during mitotic progression. Importin beta 1 (red) accumulates at mitotic spindle microtubules and poles until anaphase; later in telophase it relocalizes around the segregating chromatin, where the nuclear envelope will reform. An antibody against alpha-tubulin (green) stains the spindle microtubules and the midbody in telophase. DAPI stains chromosomes. The merged pictures represent the overlay of all three images. Bars: 5 μm.

No spontaneous mutations are reported in human cells or tissues. Importin beta 1 mutants (i.e. point mutations or deletion mutants) have been engineered in several laboratories to study the role of different domain in various cellular processes.