A human protein, originally named CC112 based on its apparent molecular weight, was identified in a search for interacting partners of CAN/NUP214, a nucleoporin regarded as a proto-oncogenic factor. CAN was implicated in acute myeloid leukemia and in myelodysplastic syndrome (von Lindern et al., 1992) as part of the DEK-CAN fusion gene generated in the translocation t(6;9)(p23;q34). Another potentially oncogenic fusion protein involving CAN was identified in a patient with acute undifferentiated leukemia, in which case the t(6;9) yielded a SET-CAN fusion. Wild-type CAN is identical to the nucleoporin NUP214. CC112 was capable of interacting with both wild-type CAN/NUP214 and with both its fusion proteins, DEK-CAN and SET-CAN, suggesting potential roles in proliferation of cancer cells (Fornerod et al., 1996).

The human XPO1/CRM1 protein is composed of 1071 aminoacidic residues with a molecular weight of 112 kDa (Fornerod et al., 1997b). It is a modular protein composed of several fuctional domains:
- The N-terminal region shares sequence similarity with importin β in a region called the CRIME domain (acronym for CRM1, importin beta etc.). This domain interacts with the GTPase RAN. In the GTP-bound form, RAN stabilizes export complex formed by CRM1 and NES-containing proteins.
- Most of the XPO1/CRM1 protein is composed of 19 HEAT repeat motifs. HEAT repeat 8 contains an acidic loop which cooperates with the CRIME domain in RANGTP binding.
- The central region of XPO1/CRM1 is involved in NES binding. Cys528, lying in this region, is specifically blocked by the inhibitor leptomycin B (LMB), which therefore blocks the export activity of XPO1/CRM1 (Wolff et al., 1997).
- The C-terminal region is thought to modulate the affinity of XPO1/CRM1 for its cargoes.

Structures
The structure of the region corresponding to residues 707-1034 (C-terminal region) was elucidated by X-ray crystallography (Petosa et al., 2004).
The structure of XPO1/CRM1 complexed to various NESs and to RANGTP has been solved (Güttler et al., 2010).

Due to its function as a shuttling nuclear transport receptor between the nucleus and cytoplasm, the human XPO1/CRM1 protein is preferentially localized at the nuclear envelope in interphase cells (Kudo et al., 1997; Fornerod et al., 1997b). In the nucleus it can be detected in specific bodies called CRM1 nucleolar bodies (CNoBs). CNoBs depend on RNA polymerase I activity, suggesting a role in ribosome biogenesis (Ernoult-Lange et al., 2009).
In mitotic cells, a fraction of XPO1 is found at centrosomes (Forgues et al., 2003; Wang et al., 2005) and a substantial fraction localizes to the kinetochores (Arnaoutov et al., 2005). 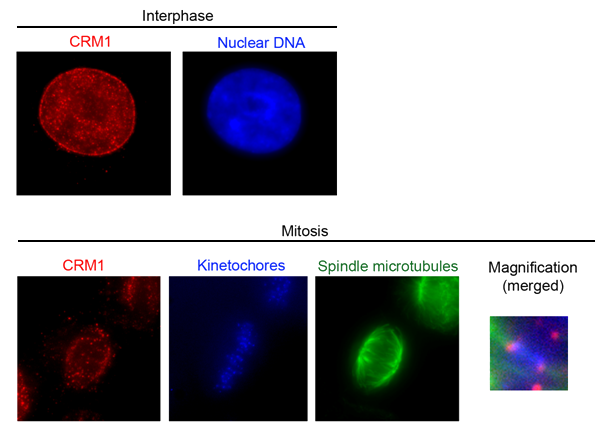 The plates show the subcellular localisation of CRM1 (detected by indirect immunofluorescence) in interphase and mitotic human HeLa cells. Upper row: an interphase cell showing CRM1 (in red in the left panel) within the nucleus and especially around the nuclear envelope, where it concentrates with a regular, punctuated pattern typical of the association with nuclear pore complexes. The nuclear shape is depicted in the upper right panel by staining the DNA with the fluorochrome 4,6-diamidino-2-phenylindole (DAPI, in blue). Lower row: a metaphase cell showing CRM1 (in red in the left panel) concentrating at the kinetochores (compare with the middle panel, where kinetochore proteins are stained using CREST antiserum and a blue-emitting secondary antibody). A CRM1 fraction is also visible at spindle poles (compare with the staining of the mitotic spindle microtubules using an antibody against alpha-tubulin, in green). The merged picture shows a 3.5x magnification of the overlay of all three images: CRM1 (red) lies at the interface between the kinetochores (blue) and the microtubules (green) projecting from opposite spindle poles.

hCRM1 was found to interact stably in complexes containing not only NUP214/CAN (or its derivatives), but also another component of nuclear pores, the nucleoporin NUP88 (Fornerod et al., 1997b). These interactions hinted at a possible role of hCRM1 in nucleocytoplasmic transport. Further studies indeed demonstrated that hCRM1 acts as a nuclear export factor (reviewed by Fried and Kutaj, 2003; Hutten and Kehlenbach, 2007): it interacts with various classes of RNAs and with proteins carrying nuclear export signals (NES) (Fornerod et al., 1997c; Fukuda et al., 1997; Ossareh-Nazari et al., 1997), short aminoacidic stretches harbouring hydrophobic residues (general consensus LX(2-3)ΦX(2-3)LXΦ, where can be L, I, M or F), present in many shuttling proteins of cellular or viral origin, and transports these molecules out of the nucleus through nuclear pore complexes in a manner dependent on the GTPase RAN. The protein is therefore alternatively called either exportin-1 or XPO1, based on its function, or hCRM1, based on evolutionary conservation.
Regulated export of some shuttling proteins (e.g., p53, p27, STAT, NF-kB and many viral proteins) out of the nucleus is essential for regulated cell cycle and cell proliferation (reviewed by Fabbro and Henderson, 2003; Rensen et al., 2008). This has lead some authors to view nuclear export as a promising target process in cancer therapy (reviewed by Yashiroda and Yoshida, 2003; Turner and Sullivan, 2008).
Recent findings have revealed additional roles of XPO1/CRM1 in mitosis: first, an XPO1/CRM1 fraction regulates the localisation of nucleophosmin (NPM/B23), a regulator of centrosome duplication. XPO1/CRM1 is required to prevent centrosome overduplication and the formation of multipolar spindles (reviewed by Budhu and Wang, 2005; Ciciarello and Lavia, 2005). Second, a kinetochore-associated fraction of XPO1/CRM1 regulates the assembly of the so-called k-fibers, bundles of microtubules that stably connect the spindle poles to the kinetochores of mitotic chromosomes to ensure proper chromosome segregation (reviewed by Arnaoutov and Dasso, 2005; Ciciarello and Lavia, 2005; Dasso, 2006). Third, XPO1/CRM1 regulates survivin, a member of the chromosomal passenger complex with roles in chromosome segregation and apoptosis (reviewed by Knauer et al., 2007).
In synthesis, XPO1/CRM1 acts in control of cell proliferation, and affects loss of proliferation control in cancer cells, through several pathways: 1. as a nuclear export factor, it directly regulates the subcellular localisation, and hence the activity, of oncogenes and tumour suppressor proteins that contain nuclear export sequences; 2. it acts in control of the mitotic apparatus and chromosome segregation; 3. it influences the maintenance of nuclear and chromosome structure.

The human protein originally named CC112 showed homology to the Schizosaccharomyces pombe CRM1 protein, first identified for being implicated in the control of higher order chromosome structure: mutation of the coding gene was associated with the appearance of "deformed nuclear chromosome domains" in fission yeast conditional mutant strains. The gene product was therefore named CRM1 (chromosome region maintenance 1; Adachi and Yanagida, 1989). Based on this homology, the human protein name of CC112 was abandoned and the name hCRM1 was used.