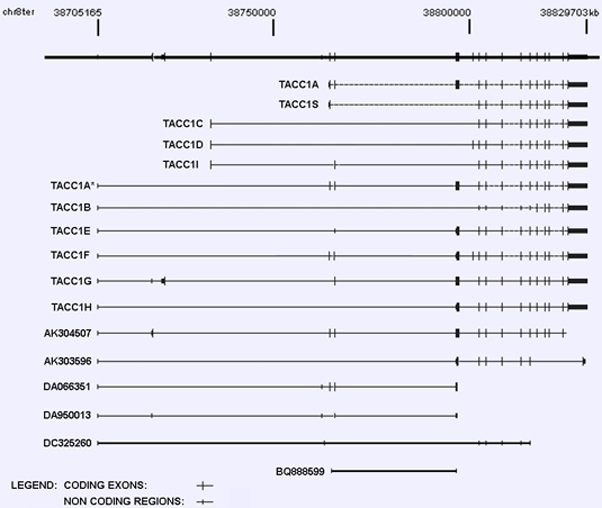 Transcripts depicted above encompass most transcripts evident in ACEVIEW and USGC genome browsers. Most other ACEVIEW "transcripts" appear to be subsets of those shown or unspliced. 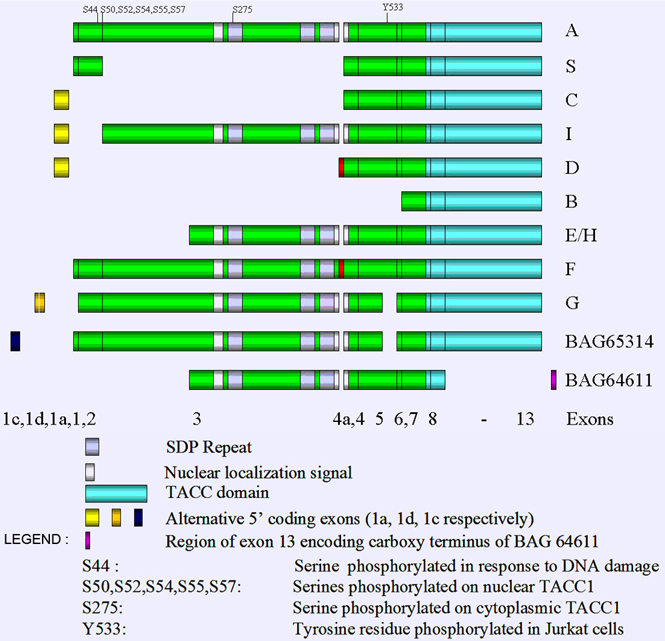 TACC1 is located in the nucleus and/or cytosol, depending on isoform and cell type (Lauffart et al., 2006). Exon 3 contains a predicted nuclear localisation signal. Most immunohistochemical analyses in sectioned tissues have used antibodies that recognize an epitope located in Exon 3. Thus, studies at the protein level have concentrated on exon 3 containing isoforms A, A*, E, F, G, H and I, but fail to differentiate between them. TACC1A weakly interacts with the centrosome during mitosis (Gergely et al., 2000). Overexpression can result in accumulation in cytoplasm in some cells resulting in oligmerisation in punctate structures (Gergely et al., 2000).

TACC1 has been proposed to function in microtubule dynamics in interphase, mitosis and cytokinesis based upon interactions with Aurora A kinase and Aurora B kinase and CKAP5 (ch-TOG/XMAP215) by interactions with the TACC domain (see Pessat and Vernos 2008 for Review). TACC1A may function in RNA splicing, decapping and/or degradation through interactions with SmG (SNRPG) and LSm-7 (LSM7) via amino acids 1-53 (Conte et al., 2002). Increased expression of TACC1A in mammary gland activates ras-MAPK and PI-3K pathways (Cully et al., 2005). The former may be due in part on TACC1A-mediated retention of pERK in the cytoplasm (Lauffart et al., 2007b). Nuclear localized TACC1 is phosphorylated on S50,S52,S54,S55,S57, cytoplasmic TACC1 is phosphorylated on S275, while Y533 is phosphorylated in Jurkat cells (Rush et al., 2005, Olsen et al., 2006). Amino acids 152-258 binds to TDRD7, but function of this interaction is unknown (Conte et al., 2003). TACC1A is a possible indirect activator of CREB via FHL family of proteins (Lauffart et al., 2007b). Uncharacterized roles in transcriptional regulation have been proposed based on TACC1 binding to GAS41 (YEATS4) via amino acid 206-427, hGCN5L2 (KAT2A), FHL coactivator/corepressor proteins and retinoid X-receptor beta via the TACC domain (Gangisetty, 2004; Lauffart et al., 2002; 2007b; 2008; Vettaikkorumakankauv et al., 2008). TACC1A can interact with BARD1 in vitro, and is phosphorylated on serine residue 44 in response to DNA damage (Matsuoka et al., 2007).
Amino acid residues involved in binding or subject to phosphorylation are quoted for TACC1A, but residues, if present in other isoforms, may also be subject to the same interactions or modifications.

To date, no mutation of TACC1 gene have been described.