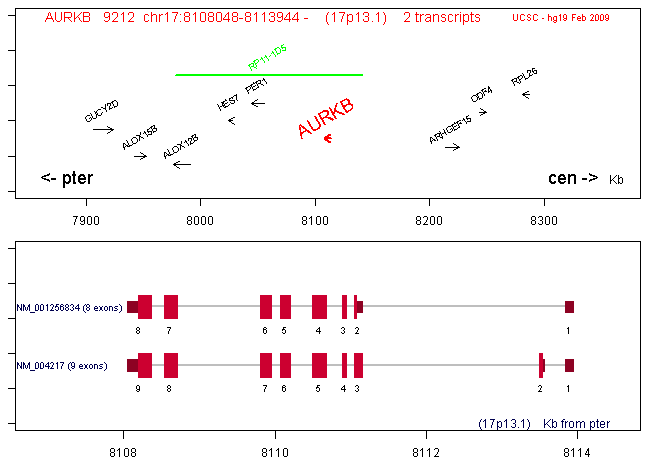 Aurora kinases are conserved during eukaryotic evolution. While the genomes of yeasts encode only one Aurora kinase (Ipl1 in budding yeast and Ark1 in fission yeast), higher eukaryotes express two or more members of this family. In mammals, there are three members (Aurora A, B and C). Aurora A (Aurora 2, ARK1, and BTAK) is present among all vertebrates. Aurora B (Aurora 1, ARK2, and AIM1) and Aurora-C (Aurora 3 and AIK3) came into existence from gene duplication during the evolution of mammals (Brown et al., 2004). 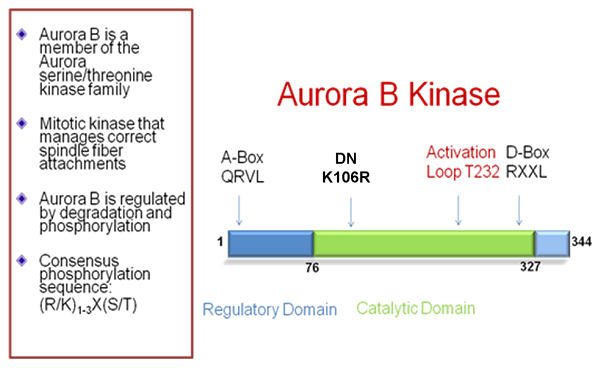 Schematic diagram of protein domains of Aurora B kinase and some key facts. DN -K106R marks the location of amino acid K at position 106 (ATP binding site), which will produce a dominant negative protein when K is mutated to R. T at position 232 is the phosphorylation site involved in autocatalysis. The A-Box and D-Box are consensus sequences for targeted polyubiquitination (King et al., 1996; Pfleger and Kirschner, 2000), and the A-Box in Aurora B is important for Aurora B degradation (Nguyen et al., 2005).

Size: 344 amino acids; molecular weight: 39.3 kDa.
The AURKB gene has 8 exons, but there are 4 isoforms of AURKB protein due to alternative splicing.
The molecular structure of Aurora B has been determined by crystallography (Sessa et al., 2005; Andersen et al., 2008; Girdler et al., 2008). When the amino acid sequences of the ATP-binding pockets of Aurora A, B and C are compared, 3 of the 26 residues lining the active site in Aurora A, Leu215, Thr217 and R220, are different from the corresponding residues in Aurora B and C (Brown et al., 2004); there is no difference in these 26 residues between Aurora B and C. The manner in which Aurora A binds to ATP (Bayliss et al., 2003) and ADP (Nowakowski et al., 2002) have been modeled. Because of the high degree of conservation of the active site between Aurora A and B, Aurora B is expected to interact with ATP and ADP in the same way as reported for Aurora A.
INCENP interacts with AURKB at an α-helix domain and activates AURKB. AURKB-Sv1 lacks the INCENP interaction domain because part of exon 5 is missing and intron 5 and intron 6 may form a new domain. Therefore, the conformation of AURKB-Sv1 is expected to be different from AURKB, and the interaction with INCENP will be affected.
In contrast, the α-helix domain for interacting with INCENP is intact in AURKB-Sv2, but AURKB-Sv2 is missing major parts of the kinase domain. Thus, AURKB-Sv2 does not have kinase activity and may act as a dominant negative competitor against AURKB.
Small molecule inhibitors target the ATP-binding pocket of aurora kinases. There are data available from the Protein Data Bank website (http://www.pdg.org) regarding the interaction of Aurora B with 3 inhibitors [AD6 (4-[(5-bromo-1,3-thiazol-2-yl) amino]-N-methylbenzamide): PDB ID 2vgp (Andersen et al., 2008), ZM447439: PDB ID 2vrx (Girdler et al., 2008), and hesperadin: PDB ID 2bfy (Sessa et al., 2005)]. 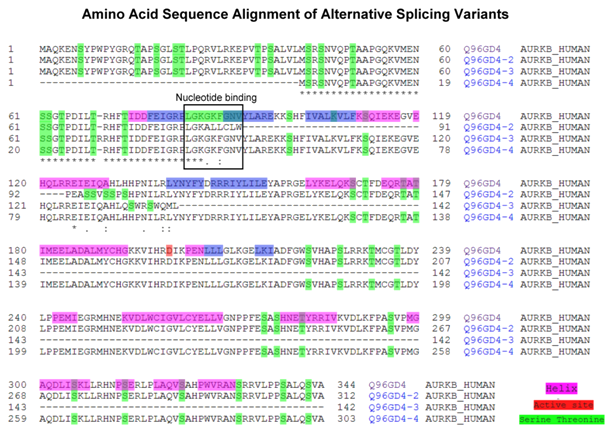 AURKB has 4 alternative splicing variants: the longest one (344 aa); AURKB-Sv1 (312 aa), which loses part of exon 5 but contains a fragment of intron 5 and intron 6 instead; AURKB-Sv2 (303 aa), which lacks exon 6; and the shortest form (142 aa), which loses more than the C-terminal half of the protein (López-Saavedra and Herrera, 2010). The serines and threonines are highlighted to demonstrate the alignment. Helix domains are highlighted in magenta. The active site is highlighted in red. The nucleotide binding region is indicated by the rectangle.

The expression of Aurora kinases varies with cell cycle phases, being at very low levels in the non-M phases (Fu et al., 2007; Gautschi et al., 2008; Mountzios et al., 2008). Although Aurora A and Aurora B are phylogenetically related, they have different biological functions and distinct temporo-spatial subcellular localization in mammals. In prophase, Aurora A is at the centrosomes while Aurora B starts to appear in the nucleus (Carmena and Earnshaw, 2003). In metaphase, Aurora A is near the spindle poles on the microtubules ends while Aurora B is on the centromeric regions of chromosomes as a chromosomal passenger protein. In anaphase, Aurora A is at the polar microtubules while Aurora B relocates from the centromeres to the spindle midzone (spindle equator) where the microtubules from opposite poles interdigitate (Keen and Taylor, 2004). In cytokinesis, Aurora B accumulates at the cleavage furrow before finally concentrating at the midbody. 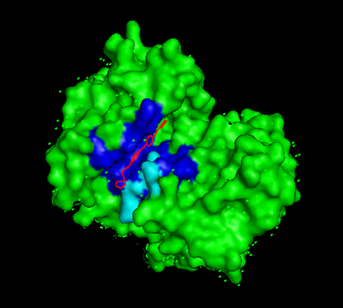 The surface model of ZM447439 bound to Aurora B (amino acid 77-361) is rendered using the program PyMOL. ZM447439 (in stick molecular structure) is shown in the active site ATP-binding pocket of Aurora B (blue), and the 3 residues that differ between Aurora B and A are highlighted in cyan. INCENP-A (amino acid 798-840) in complex with Aurora B is hidden by coloring it black.

The protein level and kinase activity of Aurora B are tightly controlled according to the phase of the cell cycle and the stages in mitosis. It expression peaks at the G2-M transition, whereas its kinase activity and subcellular localization change quickly according to the stage of mitosis. In mitosis, Aurora B, Survivin, Borealin and INCENP form the chromosomal passenger complex (Knauer et al., 2007). It is located at the chromosomes in prophase, the centromeres in prometaphase and metaphase, the central mitotic spindle in anaphase, and the cleavage furrow in cytokinesis (Adams et al., 2001). Analysis of the dynamics of Aurora B showed that the association of Aurora B with centromeres is dynamic (Murata-Hori et al., 2002) but the association with spindle microtubules during anaphase is static. Aurora B is transported to the equatorial cell cortex by astral microtubules.

In mitosis, the chromosomal passenger complex, composed of Aurora B, Survivin, Borealin and INCENP, controls chromosome alignment, histone modification, and cytokinesis (Knauer et al., 2007). Presence of this complex at the right place at the right time is the key to precise control of its enzymatic core, i.e., the Aurora B kinase (Vader et al., 2006). Although Aurora B Kinase is found in complexes that contain Borealin, it is not required for the mitotic phosphorylation of Borealin (Kaur et al., 2007). Thus far, there are a number of known substrates of Aurora B: the RNA methyltransferase NSUN2 (Sakita-Suto et al., 2007), Septin-1 (Qi et al., 2005), vimentin (Goto et al., 2003), histone H3 (Sugiyama et al., 2002), MgcRacGAP (Minoshima et al., 2003), INCENP (Bishop and Schumacher, 2002; Honda et al., 2003), Survivin (Wheatley et al., 2007) and TP53 (Gully et al., 2012).
Aurora B activity is regulated in a variety of ways. It autophosphorylates at T232 through interaction with INCENP (Yasui et al., 2004). The phosphorylation of T232 is indispensable for its kinase activity. The temporo-spatial dynamics of Aurora B is determined by its binding to tubulin (Warner et al., 2006), regulation by other kinases and phosphatases (Sugiyama et al., 2002; Gruneberg et al., 2004), and proteasomal degradation after poly-ubiquitination (Nguyen et al., 2005; Stewart and Fang, 2005; Sumara et al., 2007). Survivin (Chen et al., 2003) and protein serine/threonine phosphatase type 1 (PP1) or type 2A (PP2A) (Sugiyama et al., 2002) regulate Aurora B kinase activation while MKlp2 controls Aurora B localization in anaphase (Gruneberg et al., 2004).
Regarding mitotic chromosome condensation, Aurora B directly phosphorylates histone H3, not only at S10 but also at S28. The level of S28 phosphorylation is rendered undetectable by PP1 just prior to entry into mitosis (Goto et al., 2002). Aurora B binds three other chromosome passenger proteins - inner centromere protein (INCENP), Survivin and Borealin - to form a complex that targets Aurora B to both centromeres and the spindle. The assembly of the outer kinetochore, which binds microtubules to control chromosome movement, is restricted to mitosis, whereas the inner kinetochore remains tethered to the centromeres throughout the cell cycle. Aurora B and PP1 coordinate and mediate cell cycle-dependent changes in kinetochore assembly by regulating the phosphorylation status of kinetochore substrates (Emanuele et al., 2008). The binding of mitotic checkpoint kinase Budding Uninhibited by Benzimidazoles1 beta (BubR1) to kinetochores is regulated by the survivin/Aurora B complex. Aurora B phosphorylates mitotic centromere-associated kinesin (MCAK) at merotelic attachments and regulates the microtubule depolymerase activity of MCAK (Knowlton et al., 2006). These functions of Aurora B are essential for proper chromosome segregation (Lens and Medema, 2003). Aurora B regulates the cleavage furrow-specific vimentin by phosphorylation and controls vimentin filament segregation in cytokinesis (Goto et al., 2003).
Checkpoint kinase 1 (Chk1) is a component of the DNA damage checkpoint, and it augments spindle checkpoint signaling by activating Aurora B and BubR1 (Zachos et al., 2007). Aurora B kinase activity is also regulated by poly(ADP-ribosyl)ation; activation of Poly [ADP-ribose] polymerase 1 (PARP1) in response to DNA damage will lead to a striking inhibition of Aurora B kinase activity by poly(ADP-ribosyl)ation (Monaco et al., 2005).

Intriguingly, replacing the amino acid residue G198 of Aurora A with the equivalent residue N142 of Aurora B, i.e., Aurora A (G198N), makes this single amino acid mutant behave like Aurora B (Fu et al., 2009). Aurora A (G198N) is localized in the inner centromere in metaphase and the midzone in anaphase just like Aurora B, and it can compensate for the loss of Aurora B in chromosome misalignment and premature exit from mitosis. It binds to and phosphorylates INCENP and Survivin. Therefore, the presence of glycine (G) or asparagines (N) at a single site assigns Aurora A-like or B-like functions and properties (Fu et al., 2009).