The N-terminal portion (aa 1-150) of the Snail protein contains a SNAG (SNAI1/GFI) domain (aa 1-9) which includes the consensus sequence PRSFLV found in all Snail family members. This motif is highly conserved among species and also found in several other transcription factors where it is associated with repressive functions. A serine-rich domain (SRD: aa 90-120) and a nuclear export sequence (NES: aa 139-148) are involved in the regulation of Snail protein stability and subcellular localization, respectively.
The C-terminal portion (aa 151-264) contains 3 typical (154-176, 178-202, 208-230) and one atypical (236-259) C2H2-type zinc finger (ZF) domains.

The human SNAI1 transcript has been detected in placenta, adult heart and lung. Lower levels were reported for adult brain, liver and skeletal muscle (Paznekas et al., 1999). Several human fetal tissues were reported to express the SNAI1 transcript, with the highest levels detected in kidney (Twigg and Wilkie, 1999).
Reliable high protein expression is present in the extravillous trophoblast of the human placenta which can be utilized as positive control (Rosivatz et al., 2006). 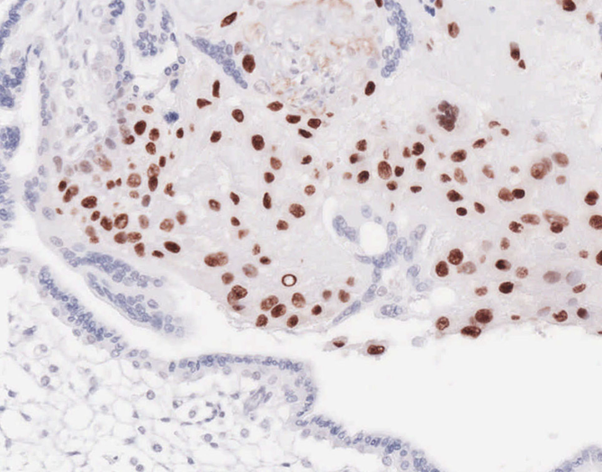 Snail protein (SNAI1) is part of a superfamily of transcription factors composed of the SNAI and the SCRATCH family (Nieto, 2002; Barrallo-Gimeno and Nieto, 2009). The SNAI family contains two more members: Slug (SNAI2 (Cohen et al., 1998)) and Smuc (SNAI3 (Katoh, 2003)) on chromosomes 8 and 16, respectively.
The Snail gene in Drosophila (sna), first identified during analysis of dorso-ventral patterning, is a zinc finger gene with repressor function required for mesoderm formation (Boulay et al., 1987; Leptin, 1991). Isolation of other Snail homologues in different species including the human indicated a high degree of conservation in coding sequence and predicted protein pointing towards a conserved role in early morphogenesis (Paznekas et al., 1999).
Snail protein functions as E-cadherin repressor and is essential during early developmental stages (Cano et al., 2000; LaBonne and Bronner-Fraser, 2000). Snail is re-expressed during adult life in tissue repair as well as in neoplasia, and, in the latter, thought to contribute to the acquisition of a metastatic potential in tumor cells (Batlle et al., 2000). The process by which Snail confers increased motility in individual cells is characterized by a down-regulation of epithelial (cell-cell adhesion, apical-basal polarity) and up-regulation of mesenchymal (cell-extracellular matrix interaction, front-back polarity) features associated with respective changes in molecular composition of the cell which include (among others) cell adhesion molecules and intermediate filaments. This process, termed epithelial-mesenchymal transition (EMT) (Hay, 1989; Thiery, 2002; Peinado et al., 2007), has been classified into 3 types: type 1 in the context of developmental processes, type 2 in inflammation, tissue repair and fibrosis, and type 3 in tumor invasion and metastasis (Kalluri and Weinberg, 2009).
To exert its function as repressor, Snail nuclear import is mediated by importins which recognize a nuclear localization signal that consists of basic residues situated in the zinc finger region (Mingot et al., 2009). Inside the nucleus Snail is required to form ternary complexes with co-repressors via the Snag domain. Different ternary complexes have been described which consist of Ajuba as mediator for the interaction with PRC2 (Herranz et al., 2008), 14-3-3 and PRMT5 (Hou et al., 2010), Sin3A for the interaction with HDAC1/HDAC2 (Peinado et al., 2004), and LSD1 for the interaction with CoREST (Lin et al., 2010). Binding to DNA occurs via E-box elements (5-CACCTG-3) found in the promoter region of different genes including the E-cadherin gene CDH1 (Batlle et al., 2000; Cano et al., 2000).
The regulation of Snail activity mainly involves the central part of the protein which contains most sites for post-translational modification: serine phosphorylation sites (Ser92, 96, 100, 104, 107) in the SRD as well as two lysine oxidation sites (Lys98 and 137), and the NES for Crm1-dependent nuclear export. Two additional serine phosphorylation sites are found N-terminal at Ser11 and C-terminal at Ser246. Phosphorylation of Ser 96, 100, 104 and 107 by GSK3beta is associated with nuclear export, ubiquitination by beta-TrCP1 or FBXL14 and proteasomal degradation (Dominguez et al., 2003; Zhou et al., 2004; Vinas-Castells et al., 2010). Snail is positively regulated by phosphorylation of Ser11, 92 and 246 and its protein stability is increased by interaction with SCP, PKA, CK2, PAK1 and LOXL2 (Peinado et al., 2005; Yang et al., 2005; Wu et al., 2009; MacPherson et al., 2010).
Limited information is available on the factors directly controlling the SNAI1 promoter. Snail up-regulation in cells has been reported as a result of diverse stimuli including cytokines (Interleukin-6), growth factors (TGFbeta, FGF, PDGF, EGF) and activation of their corresponding receptor tyrosine kinases as well as activation of developmental signaling pathways such as Wnt and Hedgehog. Notably, TGFbeta has been described as important EMT trigger leading to HMGA2 and Smad binding at the SNAI1 promoter (Thuault et al., 2008). Another example is Snail expression stimulated by HGF via the MAPK pathway and Egr-1 which also includes a negative feedback mechanism due to Snail binding at the Egr-1 promoter (Grotegut et al., 2006). Also, a conserved 3 enhancer element has been described which interacts with the SNAI1 promoter (Palmer et al., 2007). Furthermore, Snail has been found to control its own expression by binding to an E-box in its own promoter (Peiro et al., 2006). A more detailed overview over the complex signaling pathways regulating Snail expression is given in several recent review publications (Peinado et al., 2007; De Herreros et al., 2010).
Consequences of Snail up-regulation not only include the repression of E-cadherin transcription, but the negative as well as positive control of a series of genes involved in a range of biological functions such as cell-cell adhesion, cell-extracellular matrix interaction, cell polarity, cytoskeleton, cell cycle, survival, and angiogenesis leading to a phenotypic shift towards more mesenchymal cellular characteristics (De Craene et al., 2005; Higashikawa et al., 2008). In the context of tumor-associated EMT these mesenchymal-like characteristics have been correlated with a greater resistance to different therapeutic modalities (Kajita et al., 2004; Kurrey et al., 2009), escape from attack by the immune system (Kudo-Saito et al., 2009), and adoption of a cancer stem cell phenotype (Mani et al., 2008; Morel et al., 2008).
The importance and the exact biological implications of Snail expression in human tumors remain a focus of current research (Schwock et al., 2010). Some of the challenges in this area may be due to the transient and dynamic nature of tumor-associated EMT. Also, it has been proposed that Snail is required as initial trigger in EMT, whereas maintenance of the phenotype is taken over by other factors potentially leaving behind a mesenchymal cell devoid of Snail expression (Peinado et al., 2007). Another intriguing recent observation is the presence of Snail in tumor-associated stroma and its impact on tumor prognosis (Franci et al., 2009).