Monomorphic PTLD (B- and T/NK-cell types)

Post-transplant lymphoproliferative disorders (PTLDs) are serious, life-threatening complications of transplantation, which represent a heterogeneous group of lymphoproliferative diseases and show a spectrum of clinical, morphologic, and molecular genetic features ranging from reactive polyclonal lesions to frank lymphomas. Monomorphic (M) PTLD fufill the criteria for one of the B-cell or T/NK cell neoplasms that are recognized in the immunocompetent host, which shows characteristic clinicopathological features and molecular involvement.

The term "post-transplant lymphoproliferative disorder" or disease (PTLD) was first introduced in 1984 by Starzl ( Starzl et al.1984) .PTLDs are serious, life-threatening complications of solid-organ transplantation (SOT) and bone marrow transplantation, and are associated with high mortality. PTLDs represent a heterogeneous group of lymphoproliferative diseases, which show a spectrum of clinical, morphologic, and molecular genetic features ranging from reactive polyclonal lesions to frank lymphomas.
PTLDs are classified into early lesions, polymorphic, monomorphic and classical Hodgkins lymphoma-like PTLD.
M-PTLD shows characteristic clinicopathological features and molecular involvement. M- PTLD are composed of monotonous proliferation of transformed lymphoid cells or plasmacytic cells, there may be significant pleomorphism and variability of cell size within a given case. M-PTLD can be one of B-cell or T/NK-cell neoplasms, however, the small B-cell lymphoid neoplasms such asfollicular lymphomas or MALT lymphomas are not designated as PTLD. The M-PTLD should be dedignated as PTLD in the diagnostic line of the pathology report, and then further categorized based on the classification of lymphomas arising in the immunocompetent host ( Swerdlow, et al ,2008. Mucha, et al. 2010. His ED, et al , 2000).
The B-cell M-PTLD are monoclonal transformed B lymphocytic or plasmacytic proliferations that fufill the criteria for a diffuse large B-cell lymphoma, less often a Burkitt lymphoma or a plasma cell neoplasm . The T/NK-cell type M-PTLD include PTLD that fufill the criteria for any of the T- or natural killer cell lymphomas. They include almost the entire spectrum of T- or NK-cell neoplasma, with the largest group being peripheral T-cell lymphoma, not otherwise specified type, followed by hepatosplenic T-cell lymphoma, extranodal NK/T-cell lymphoma, nasal type ( Swerdlow, et al , 2008).

The incidence of PTLD ranges from 1-3 % in renal to 5-20 % in lung and intestinal transplantation, related to the type of transplanted organ, intensity of IS, age, and viral infection, etc.( Opelz, 2003. Opelz,1993.) In contrast, the incidence of PTLD after BMT is about 1.0 % for recipients from HLA-compatible related donors (lower than that of SOT), but in up to 25 % for high-risk patients (Curtis, 1999). However, the field has evolved during the last decade. Hoegh-Petersen et al. found a frequency of 8.1 % among 307 allo-HSCT recipients who had also received ATG-based conditioning. Kamani et al. found an overall incidence of 2.3 % for post-transplant malignancy (most of which were PTLD) in patients receiving such transplant for primary immunodeficiency disorders. The highest subgroup, those patients with Wiskott-Aldrich syndrome, had a 3.3 % frequency.In our hospital, it is 1.5 % (9/585) from August 2002 to October 2006 and about 1 % (9/857) from November 2006 to November 2009 after allo-HSCT, respectively. The incidence of PTLD was higher in mismatched or unrelated HSCT group than that of conventional one, 3.4 % (7/208), 2.3 % (1/44) versus 0/323. It was also higher in patients with conditioning regimen including ATG than those without, 3.4 % (9/262) vs. 0/323. In North Ameica and Western Europe, the T/NK-cell type M-PTLD make up no more than 15% of PTLD (Swerdlow, et al ,2008. Chen, 2013)

The clinical features of PTLD differ from those of lymphomas observed in the general population. Symptoms may be mild, such as fever, mononucleosis-like syndrome, lymphadenopathy, recurrent infections or severe organ dysfunction. The variable manifestation of PTLD depends on many factors, such as the type of transplanted organ or IS used, histopathology and time elapsed since transplantation. The first year after transplantation is important, in lung recipients, more than 50 % of all PTLDs develop during the first post-transplant year. Our data showed that 88.2 % of patients (15/17) were diagnosed within 7 months after transplantation (1.5-7 months), and the median interval after transplantation to the diagnosis was 2.5 months (mean 4.7 months, range 1.5-19 months), shorter than that of SOT. The frequent sites of PTLD include GI (jejunum more often than colon), lymph nodes, and central nervous system, different from type to type of transplantation.
The clinical presentation of patients with B-cell M-PTLD is similar to that of the lymphomas or plasma cell neoplasms that they resemble, whereas the presentation of T/NK-cell M-PTLD depends on the type of neoplasm. Most cases present as extranodal sites, sometimes with associated lymphadenopathy (Opelz, et al, 2003. Swerdlow, et al ,2008. Johnson, et al, 2006. Swerdlow,2007). 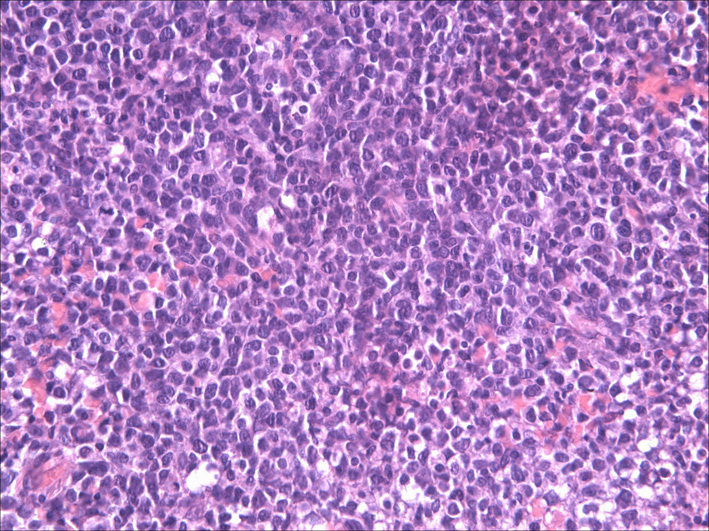 Figure 1. Effacement of the architecture and proliferative large lymphoid cells, with marked nucleoli. ( HE stain) 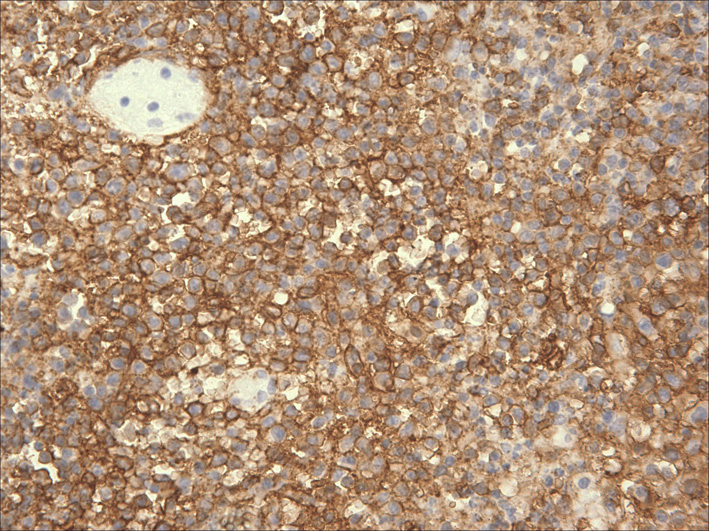 Figure 2. The cells are positive for CD20. 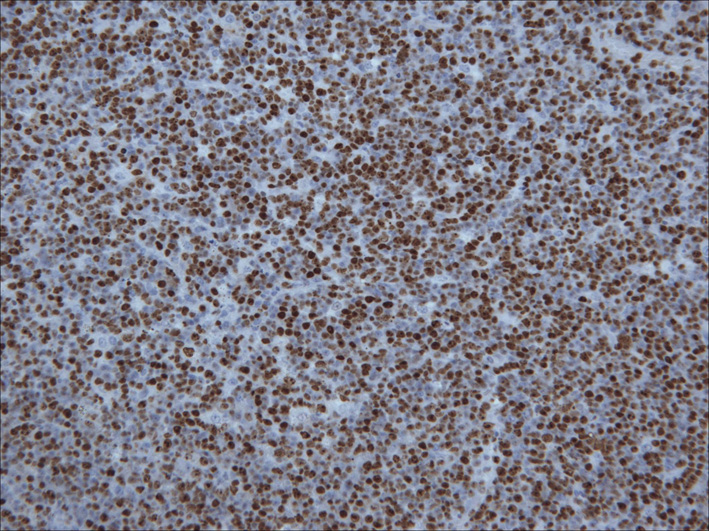 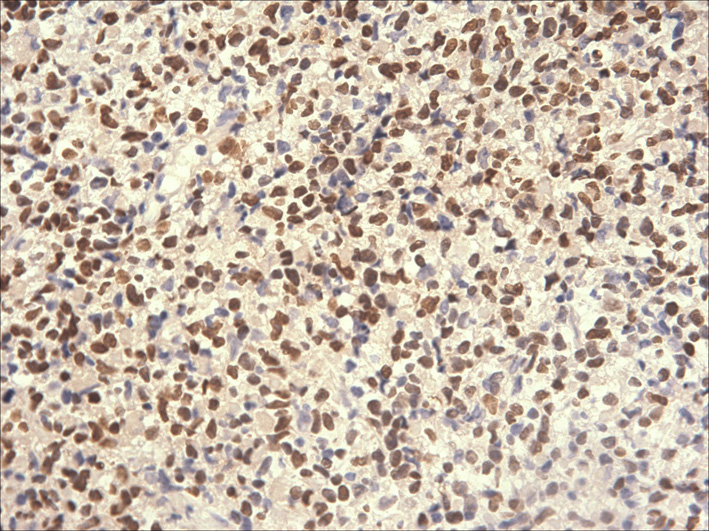 Figure 4. Some cells are positive for EBER (in situ hridization). 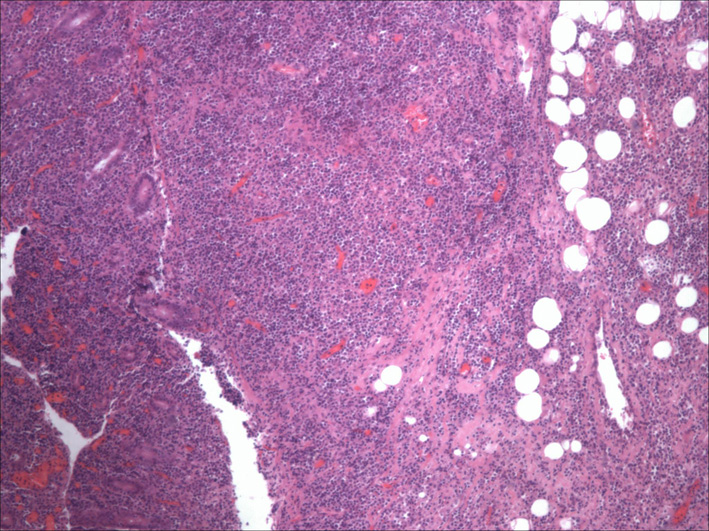 Figure 5. The intestinal wall is infiltrated by lymphoid tissue. 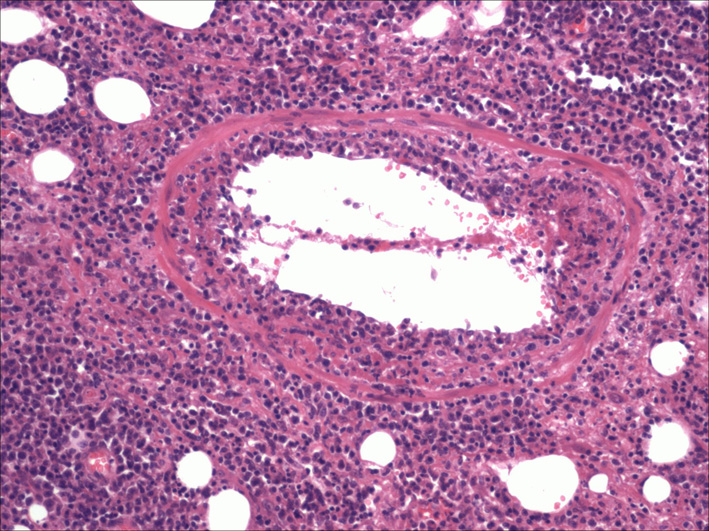 Figure 6. The neoplastic cells are monotonous and medium-sized, infiltrateing and destroying an artery. 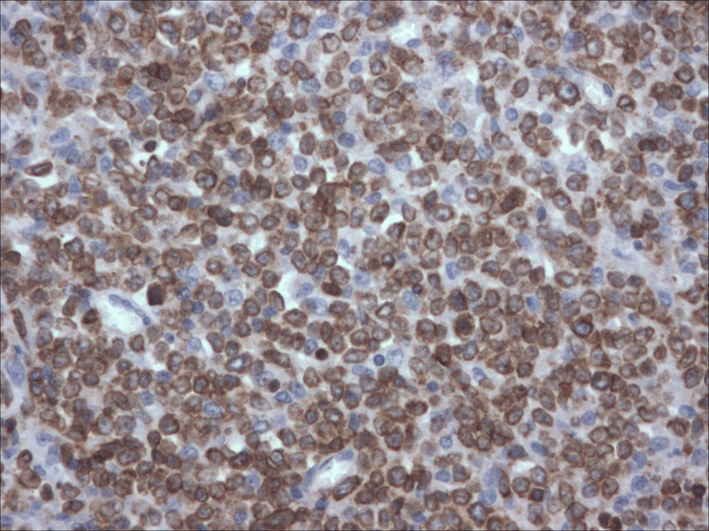 Figure 7. The cells are positive for CD3. 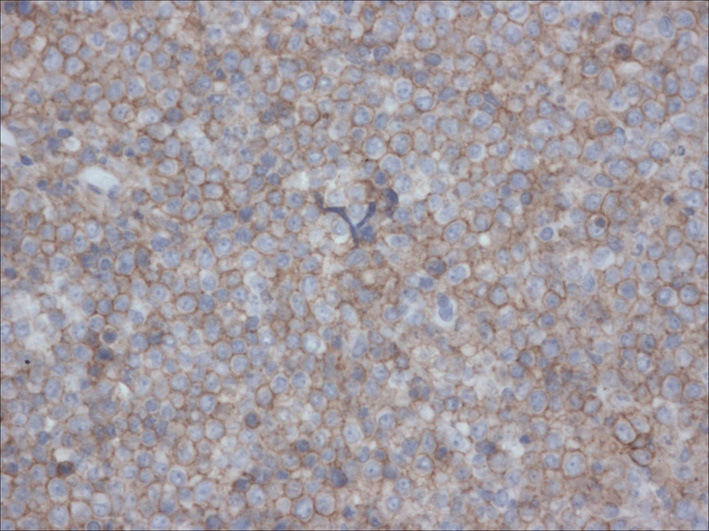 Figure 8. The cells are positive for CD56. 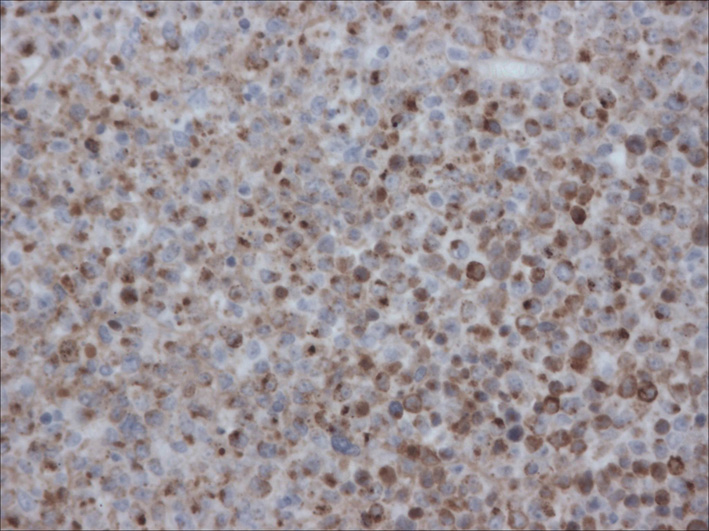 Figure 9. The cells are positive for granzyme B. 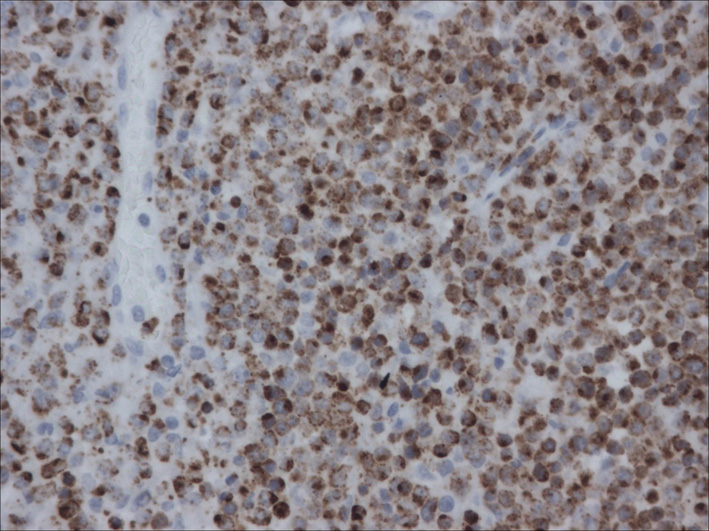 Figure 10. The cells are positive for TIA1. 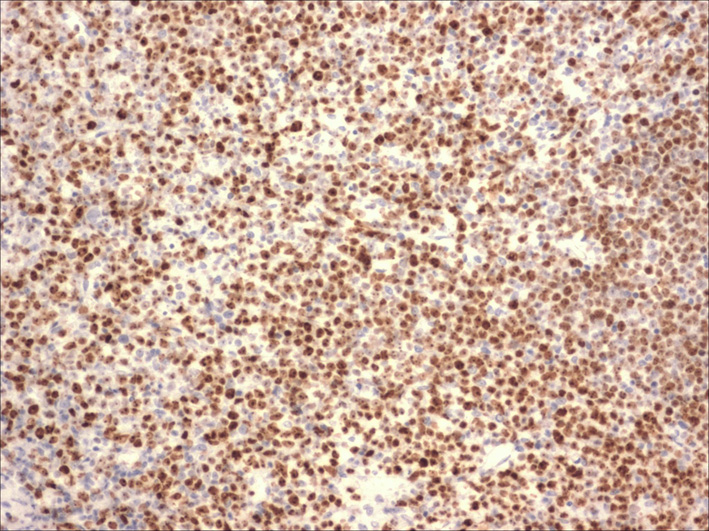 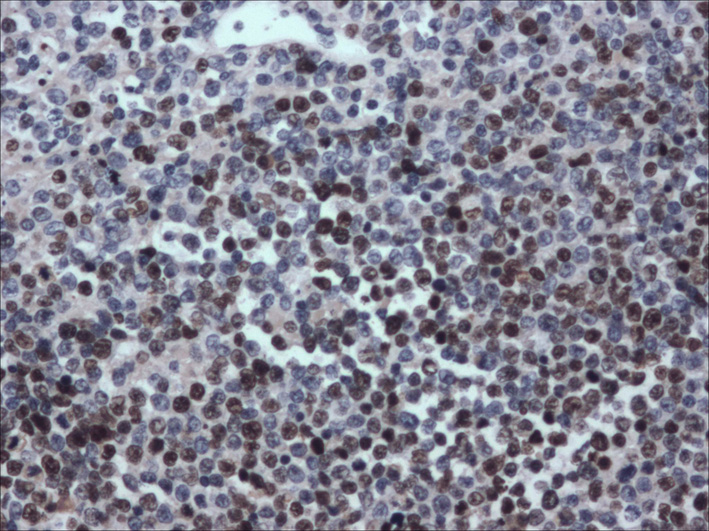 Figure 12. Some cells are positive for EBER. (in situ hridization).

There is no consensus on the optimal treatment of PTLD. It is generally agreed that three major strategies should be applied: restoration of the recipients immunity (to limit the EBV infection), elimination EBV and removal of neoplastic B cells. Reduction of IS or even withdrawal remains the first-line treatment. With reduction of immunosuppression, virtually all early lesions regress and generally show good prognosis, whereas half of P-PTLD regress and some will progress, the majority of M-PTLDs do not regress. DLI was effectively used in EBV-associated PTLD after mismatched/haploidentical haematopoietic stem cell transplantation (HSCT). Patients with lymph node localization have a relatively good outcome, and disseminated disease in contrast has a poor prognosis( Mucha, et al, 2010. Xu, et al, 2010).

The prognosis of PTLD is poor. The treatment of rejection episodes with OKT3 or ATG enhances the PTLD risk in patients who did not receive antibody induction, rejection therapy with OKT3 or ATG adds to the already increased lymphoma risk HLA matching is also a risk factor in the pathogenesis of PTLD, and HLA-B or HLA-DR mismatches especially seem to be critical. The number of HLA mismatches parallels with an increased risk of PTLD ( Opelz, et al, 2003. Opelz, et al, 2010).

Monomorphic PTLD (B- and T/NK-cell types)