Post-transplant lymphoproliferative disorders (PTLDs) are serious, life-threatening complications of transplantation, which represent a heterogeneous group of lymphoproliferative diseases and show a spectrum of clinical, morphologic, and molecular genetic features ranging from reactive polyclonal lesions to frank lymphomas. Polymorphic(P) PTLD are composed of immunoblasts, plasma cells and small and intermediate-sized lymphoid cells that efface the architecture of lymph nodes or form destructive extranodal masses and do not fulfill the criteria for any of the recognized types of lymphoma described in immunocompetent hosts, which shows characteristic clinicopathological features and molecular involvement.

The term "post-transplant lymphoproliferative disorder" or disease (PTLD) was first introduced in 1984 by Starzl (Starzl et al.1984). PTLDs are serious, life-threatening complications of solid-organ transplantation (SOT) and bone marrow transplantation, and are associated with high mortality. PTLDs represent a heterogeneous group of lymphoproliferative diseases, which show a spectrum of clinical, morphologic, and molecular genetic features ranging from reactive polyclonal lesions to frank lymphomas. .
PTLDs are classified into early lesions, polymorphic, monomorphic, and classical Hodgkins lymphoma-like PTLD.
P-PTLD shows characteristic clinicopathological features and molecular involvement. P- PTLD are composed of immunoblasts, plasma cells and small and intermediate-sized lymphoid cells that efface the architecture of lymph nodes or form destructive extranodal masses and do not fulfill the criteria for any of the recognized types of lymphoma described in immunocompetent hosts (Swerdlow, et al ,2008. Mucha, et al. 2010.)

The clinical features of PTLD differ from those of lymphomas observed in the general population. Symptoms may be mild, such as fever, mononucleosis-like syndrome, lymphadenopathy, recurrent infections or severe organ dysfunction. The variable manifestation of PTLD depends on many factors, such as the type of transplanted organ or IS used, histopathology and time elapsed since transplantation. The first year after transplantation is important, in lung recipients, more than 50 % of all PTLDs develop during the first post-transplant year. Our data showed that 88.2 % of patients (15/17) were diagnosed within 7 months after transplantation (1.5-7 months), and the median interval after transplantation to the diagnosis was 2.5 months (mean 4.7 months, range 1.5-19 months), shorter than that of SOT. The frequent sites of PTLD include GI (jejunum more often than colon), lymph nodes, and central nervous system, different from type to type of transplantation.
The frequency of P-PTLD is different from one institution to another, ranging from 20% to over 80% of the cases. P-PTLD is most commonly seen in children, the clinical presentation of which is same to PTLD in general (Opelz, et al, 2003. Swerdlow, et al ,2008. Johnson, et al, 2006.Nelson, et al, 2000. Webber , et al ,2006).

P-PTLD is characterized by effacement of the architecture and full range of B-cell maturation from immunoblasts to plasma cells, with lymphocytes and Hodgkin and Reed-Sternberg (HRS)-like cells. P-PTLD was proposed to separate into polymorphic B-cell hyperplasias and polymorphic B-cell lymphoma, the former composed of a mixture of lymphoid cells with prominent plasmacytoid differentiation and abundant immunoblasts without cytologic atypia, in which necrosis was limited to single cells or small foci, whereas the latter lacking prominent plasmacytoid differentiation with significant cytologic atypia, atypical immunoblasts, and large confluent coagulative areas of necrosis.(Knowles, et al, 1995). 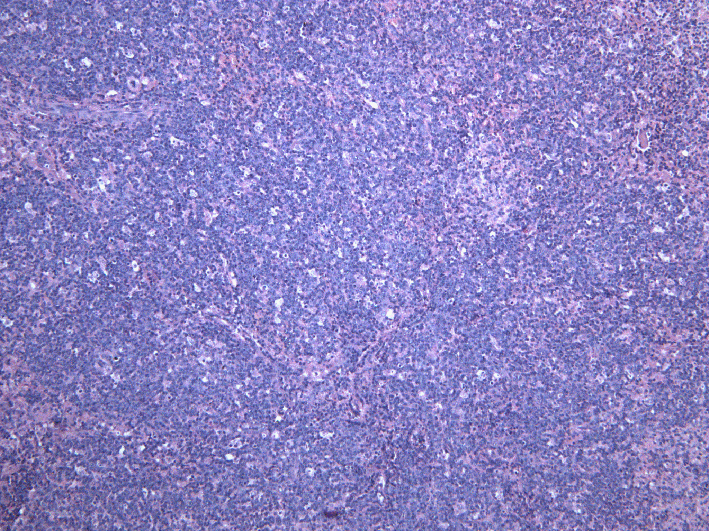 Figure 1. Polymorphic PTLD. Effacement of the architecture and proliferative lymphoid cells. ( HE stain) 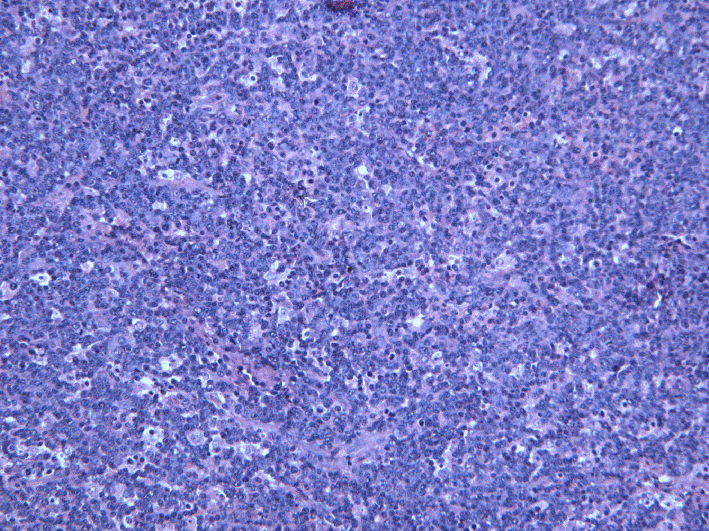 Figure 2. There is a polymorphic proliferation of immunoblasts, small lymophoid cells and plasma cells, with lymphocytes and HRS-like cells 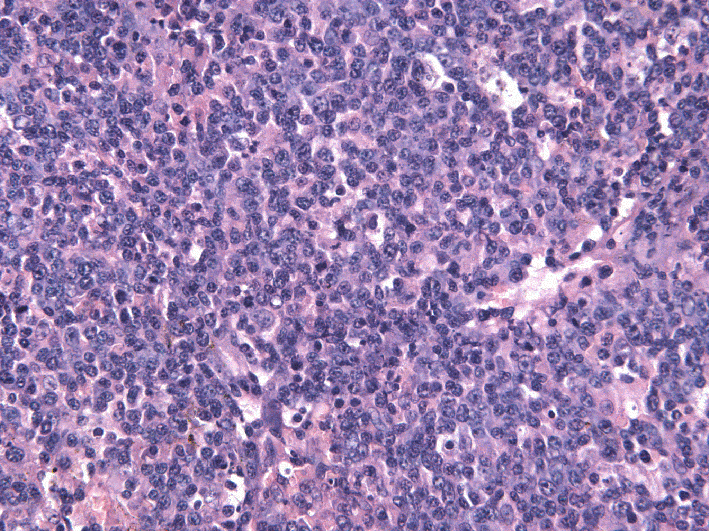 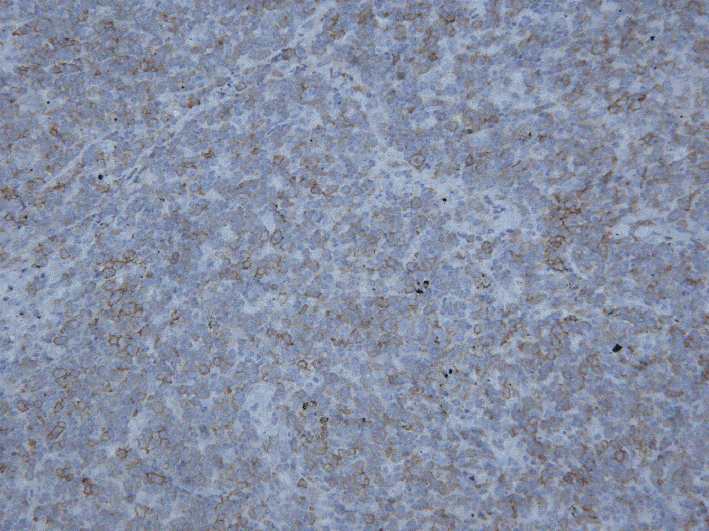 Figure 4. Some cells are positive for CD20. 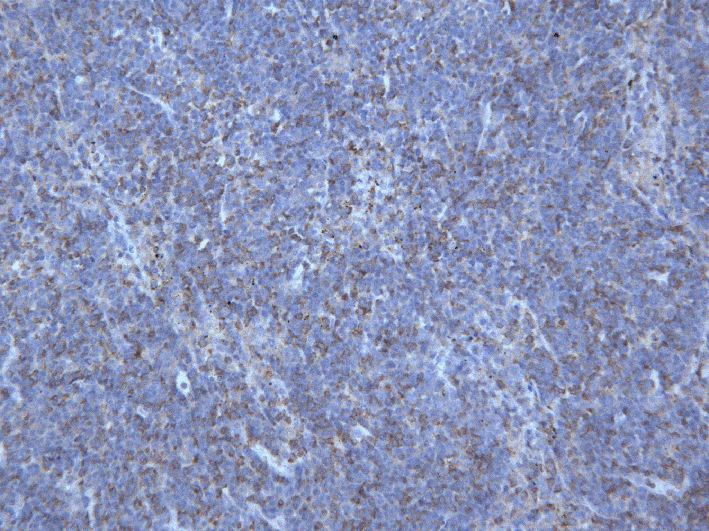 Figure 5. Some cells are positive for CD3. 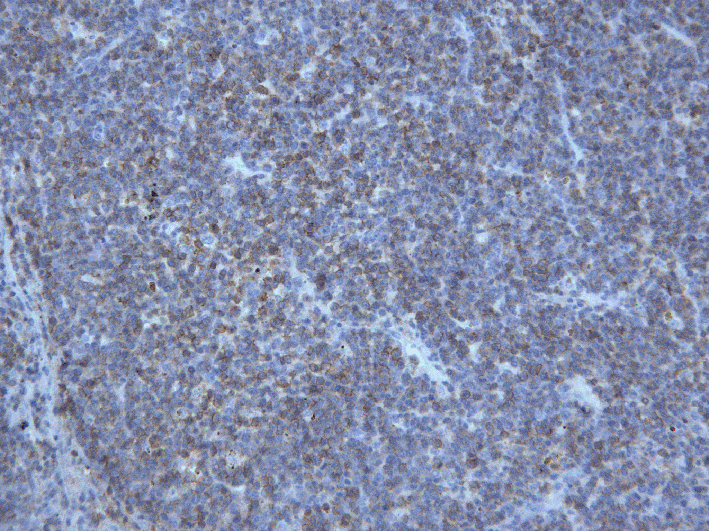 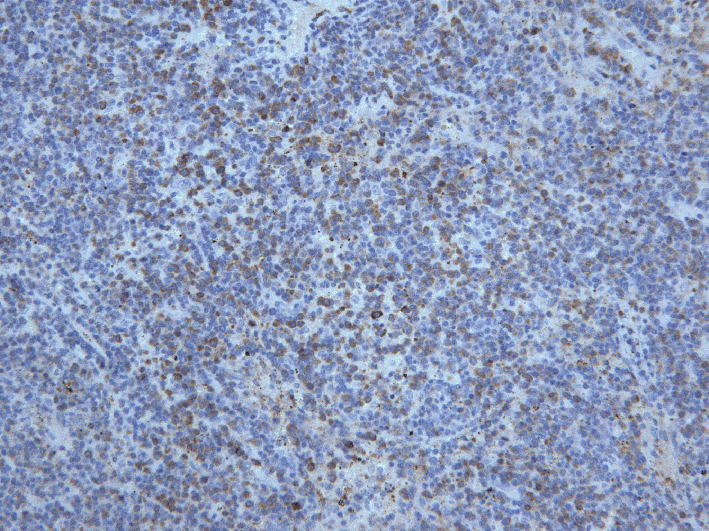 Figure 7. Some plasma cells are positive for Kappa 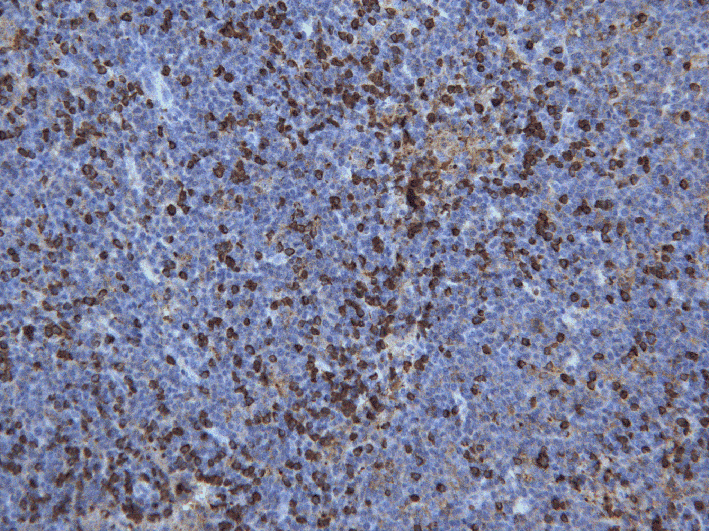 Figure 8. Some plasma cells are positive for Lambda.There is no light chain restriction can be seen. 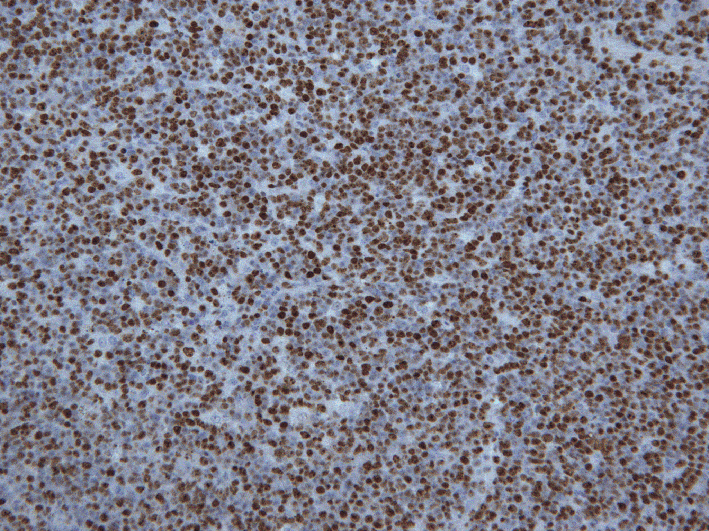 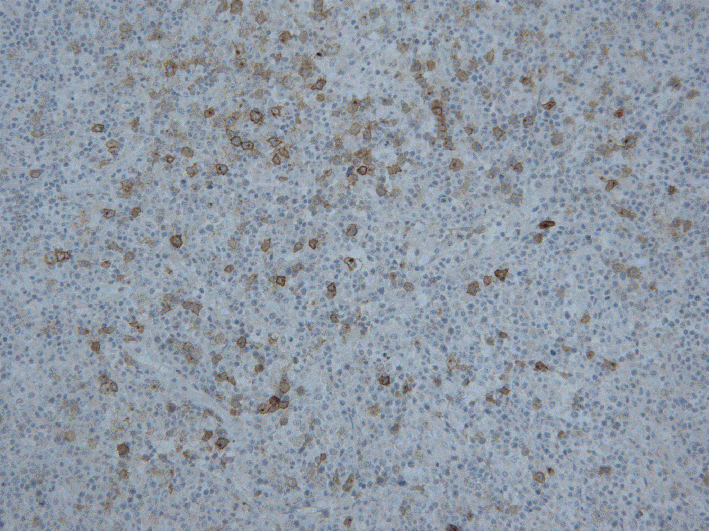 Figure 10. The immunoblasts were positive for CD30, variable in staining intensity.

There is no consensus on the optimal treatment of PTLD. It is generally agreed that three major strategies should be applied: restoration of the recipients immunity (to limit the EBV infection), elimination EBV and removal of neoplastic B cells. Reduction of IS or even withdrawal remains the first-line treatment. With reduction of immunosuppression, virtually all early lesions regress and generally show good prognosis, whereas half of P-PTLD regress and some will progress, the majority of M-PTLDs do not regress. DLI was effectively used in EBV-associated PTLD after mismatched/haploidentical haematopoietic stem cell transplantation (HSCT) . Patients with lymph node localization have a relatively good outcome, and disseminated disease in contrast has a poor prognosis ( Mucha, et al, 2010. Xu, et al, 2010).

The prognosis of PTLD is poor. The treatment of rejection episodes with OKT3 or ATG enhances the PTLD risk in patients who did not receive antibody induction, rejection therapy with OKT3 or ATG adds to the already increased lymphoma risk HLA matching is also a risk factor in the pathogenesis of PTLD, and HLA-B or HLA-DR mismatches especially seem to be critical. The number of HLA mismatches parallels with an increased risk of PTLD (Opelz, et al, 2003. Opelz, et al, 2010).

P-PTLD are expected to demonstrate clonally rearranged immunoglobulin genes although the clones are less predominant than in monomorphic PTLD. Seventy-five percent of P-PTLD are reported to have mutated immunoglobulin gene variable regions without ongoing mutations and the remainder are unmutated. BCL6 somatic hypermutations may be present as well as aberrant promoter methylation, but other oncogene abnormalities are not detected (Swerdlow, et al ,2008. Capello ,et al, 2005).